Leaders of 2 Koreas exchange letters of hope amid tensions 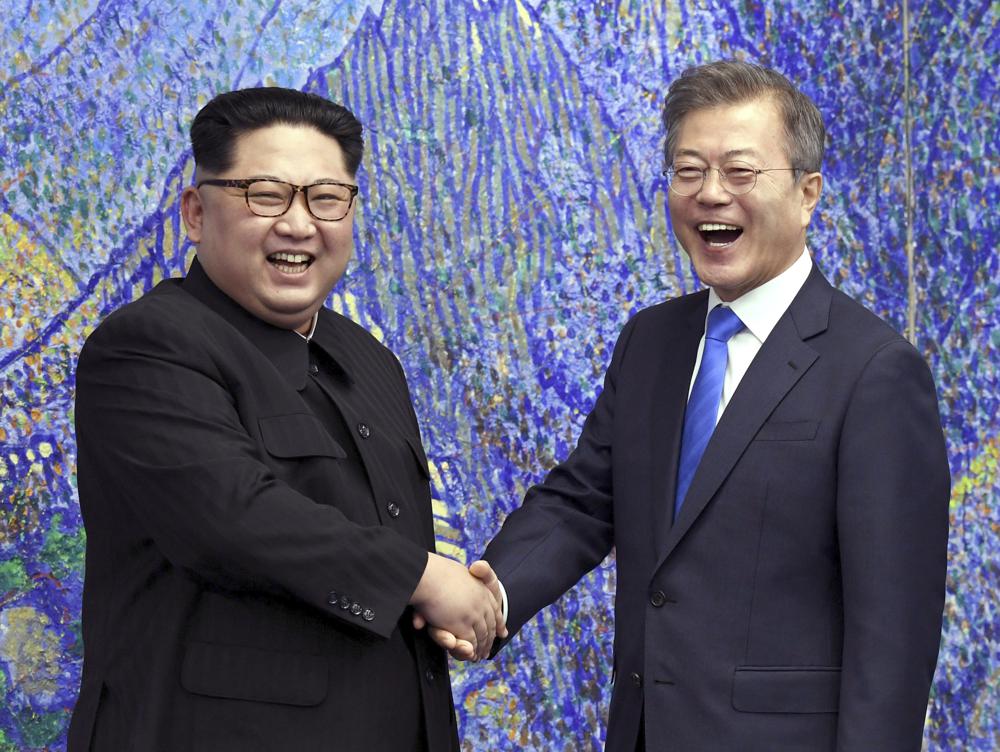 The leaders of the rival Koreas exchanged letters expressing hope for improved bilateral relations, which plummeted in the past three years amid a freeze in nuclear negotiations and North Korea’s accelerating weapons development, Associated Press reported.

Experts say North Korea’s announcement of the letters, which came as Kim possibly prepares for a nuclear test and other major provocations, is aimed at dividing public opinion in South Korea and discouraging Seoul’s new government from taking a hard line toward Pyongyang after its inauguration in May.

KCNA said Moon told Kim he would continue to campaign for Korean reunification even after he leaves office next month, basing his efforts on their joint declarations for peace issued after their summit meetings in 2018.

Kim and Moon shared views that “inter-Korean relations would improve and develop as desired and anticipated by the (Korean) nation if the (North and the South) make tireless efforts with hope,” KCNA said.

Moon’s office confirmed the exchange of letters shortly after KCNA’s report, but spent hours before releasing its version of what was said, which indicated that the North didn’t coordinate with Seoul before announcing the exchange. KCNA’s report wasn’t published on the North’s official Rodong Sinmun newspaper, read by its domestic audience, showing that the message was intended for the South.

According to Seoul, Moon in his letter to Kim acknowledged setbacks in inter-Korean relations but insisted that their aspirational vows for peace during their summits in 2018 and an accompanying military agreement aimed at defusing border area clashes remain relevant as a foundation for future cooperation.

Moon also expressed hope for a resumption of nuclear talks between Washington and Pyongyang and for Kim to pursue cooperation with Seoul’s next government led by conservative President-elect Yoon Suk Yeol, Moon’s spokesperson Park Kyung-mee said.

While sending a letter to the North’s leader is a courtesy as the South’s leaves office, analyst Cheong Seong-Chang at the South’s private Sejong Institute said, the North publicized the personal exchange with an aim to create division in South Korea ahead of a government change.

“Considering indications that North Korea is preparing for its seventh nuclear test, it’s questionable whether it was appropriate for President Moon to send a letter to Chairman Kim to express his warm greetings,” Cheong said.

Yoon, who takes office on May 10, has harshly described Moon’s foreign policy for being “subservient” toward North Korea and said he wouldn’t pursue “talks for talks’ sake.” He has vowed to strengthen South Korea’s defense in conjunction with its alliance with the United States, which he says would include enhancing preemptive strike capabilities and anti-missile systems to deter North Korean attacks.

Tensions on the Korean Peninsula have risen since a series of North Korean weapons tests this year, including its first flight-test of an intercontinental ballistic missile since 2017 in March, reviving the nuclear brinkmanship aimed at forcing the U.S. to accept it as a nuclear power and to remove crippling sanctions.

South Korea’s military has also detected signs that North Korea is rebuilding tunnels at a nuclear testing ground it partially dismantled weeks before Kim’s first meeting with then-President Donald Trump in June 2018, a possible indicator that the country is preparing to resume nuclear explosive tests.

Staking his single presidential term on inter-Korean rapprochement, Moon met Kim three times in 2018 and lobbied hard to help set up Kim’s meetings with Trump. But the diplomacy never recovered from the collapse of the second Kim-Trump meeting in 2019 in Vietnam, where the Americans rejected North Korea’s demands for major sanctions relief in exchange for dismantling an aging nuclear facility, which would have amounted to a partial surrender of its nuclear capabilities.

Kim has since vowed to bolster his nuclear deterrent to counter “gangster-like” U.S. pressure and sped up his weapons development despite limited resources and pandemic-related difficulties.

North Korea also severed all cooperation with Moon’s government while expressing anger over the continuation of U.S.-South Korea military exercises, which were curtailed in recent years to promote diplomacy with the North, and Seoul’s inability to wrest concessions from Washington on its behalf.

Analysts say North Korea is likely to escalate its weapons demonstrations in coming weeks or months to force a reaction from the Biden administration, which has been focused on Russia’s war on Ukraine and a rivalry with China.

Biden’s special envoy for North Korea, Sung Kim, traveled to Seoul this week for meetings with senior South Korean officials and said they agreed on the need for a strong response to counter North Korea’s “destabilizing behavior.”

Seoul has also accused North Korea of destroying South Korean-owned facilities at the North’s Diamond Mountain resort where they ran tours together until 2008. Kim in 2019 called the South Korean facilities there “shabby” and ordered them destroyed, though the work was delayed by the coronavirus pandemic.