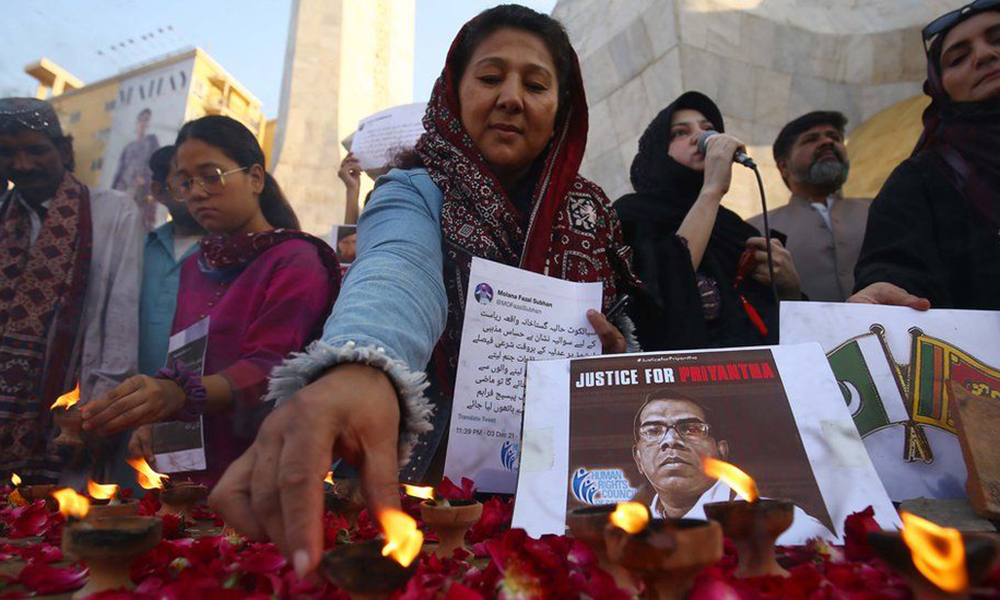 Six men have been sentenced to death over the mob killing of a Sri Lankan man accused of blasphemy in Pakistan, BBC reported.

Priyantha Diyawadanage, 48, a factory manager in the city of Sialkot, was beaten to death and his body set alight last December.

Of 88 people convicted, nine were given life sentences and the others jail terms of two to five years.

The case shocked the country and was described as “a day of shame” by the then Prime Minister Imran Khan.

Videos of the lynching on social media showed scenes of the incensed crowd dragging Mr Diyawadanage from his workplace and beating him to death.

They then burnt his body, with several people seen in the crowd taking selfies with his corpse.

The victim’s wife, Nilushi Dissanayaka, described how she had seen him “being attacked on the internet… it was so inhumane”.

What led to the mob violence?

The violence had begun after rumours spread that Mr Diyawadanage had allegedly committed a blasphemous action, in tearing down posters with the name of the Prophet Muhammad.

But a colleague, who rushed to the site in a bid to save him, told local media at the time that Mr Diyawadanage had only removed the posters as the building was about to be cleaned.

The scale of the vicious killing – involving hundreds of people – shocked the nation and sparked vigils.

Blasphemy is defined as speaking insultingly about a particular religion or god. In Pakistan, it can carry a potential death sentence for anyone who insults Islam.

The country’s blasphemy law prohibits disturbing a religious assembly, trespassing on burial grounds, insulting religious beliefs or intentionally destroying or defiling a place or an object of worship.

Making derogatory remarks against Islamic personages is an offence – and in 1982, a clause prescribing life imprisonment for “wilful” desecration of the Quran, the Muslim holy book, was added.

In 1986, a separate clause was inserted to punish blasphemy against the Prophet Muhammad and the penalty recommended was “death, or imprisonment for life”.

In Pakistan, even unfounded accusations can incite protests and mob violence against alleged perpetrators. Human rights critics have long argued that minorities are often the target of accusations.