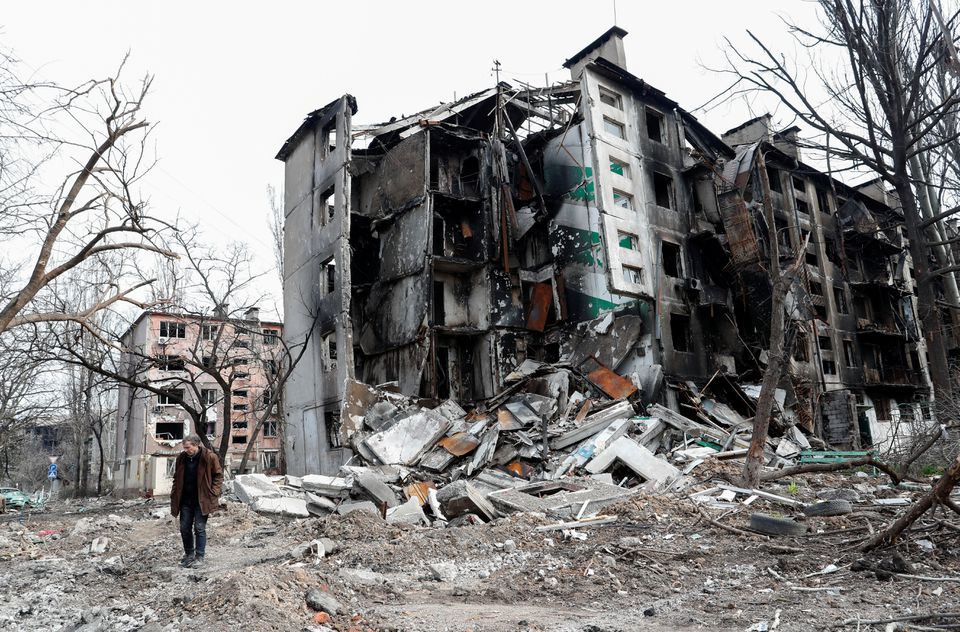 Ukrainian authorities condemned Russian artillery attacks on cities in the northeast and the continuing siege of the southern port city of Mariupol, of which Moscow said it had taken almost full control, following almost two months of bloody fighting, Reuters reported.

After failing to overcome Ukrainian resistance in the north, the Russian military has refocused its ground offensive on Donbas, while launching long-distance strikes at targets elsewhere, including the capital, Kyiv.

Eighteen people have been killed and more than 100 wounded in shelling in the past four days in the northeastern city of Kharkiv, Ukraine’s President Volodymyr Zelenskiy said.

Russia denies targeting civilians and has rejected what Ukraine says is evidence of atrocities as staged to undermine peace talks. It calls its action a special military operation to demilitarise Ukraine and eradicate what it calls dangerous nationalists.

Ukrainian Prime Minister Denys Shmyhal said troops in the pulverised port of Mariupol were still fighting on Sunday, despite a Russian demand to surrender by dawn.

“The city still has not fallen,” he told ABC’s “This Week” programme, adding that Ukrainian soldiers continued to control some parts of the southeastern city.

“The next week will be difficult,” he said in a post on his Facebook page. “It may be the last time we have a chance to save you.”

On the streets of Mariupol, small groups of bodies were lined up under colourful blankets, surrounded by shredded trees and scorched buildings.

Residents, some pushing bicycles, picked their way around destroyed tanks and civilian vehicles while Russian soldiers checked the documents of motorists.

Among them was Irina, who was evacuating with a niece wounded in the shelling.

“I have a daughter in DNR,” she said, referring to the self-proclaimed Donetsk People’s Republic. “Maybe we will try to move there for the time being.

“I hope they will re-build (Mariupol). The most important thing is utility systems. Summer will pass fast and in winter it will be hard.”

About four million Ukrainians have fled the country, cities have been shattered and thousands have died since the start of the invasion on Feb. 24.

The economic damage is significant. Shmyhal said Ukraine’s budget deficit was about $5 billion a month and urged Western governments for more financial aid.

On Twitter, Zelenskiy said he had discussed ensuring Ukraine’s financial stability and preparations for post-war reconstruction with International Monetary Fund Managing Director Kristalina Georgieva, quoting her as having said support was essential to lay the foundations for rebuilding.

Ukraine pressed on with efforts to swiftly join the European Union, as officials completed a questionnaire that is a starting point for the EU to decide on its membership. On Easter Sunday, Pope Francis implicitly criticised Russia, pleading for an end to the bloodshed and lamenting the “Easter of war” in a speech in St Peter’s Square after Mass.

“May there be peace for war-torn Ukraine, so sorely tried by the violence and destruction of the cruel and senseless war into which it was dragged,” he said.

On Saturday, Russia said it had control of urban areas, with some Ukrainian fighters remaining in the Azovstal steelworks overlooking the Sea of Azov.

Capturing Mariupol, the main port in the Donbas region, would be a strategic prize for Russia, linking territory held by pro-Russian separatists in the east with the Crimea region Moscow annexed in 2014.

Serhiy Gaidai, the governor of the neighbouring region of Luhansk, which has seen heavy fighting, repeated a plea for people to evacuate.