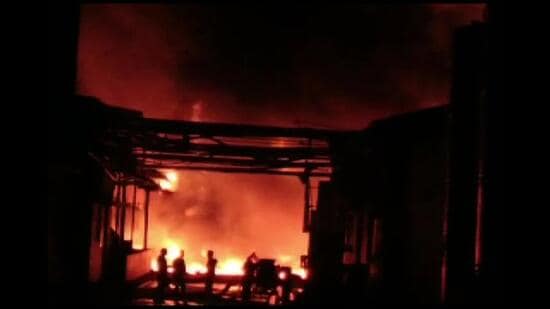 Six people were charred to death and at least 15 sustained burn injuries when a reactor exploded apparently due to a gas leak at a pharma manufacturing unit at Akkireddygudem in Andhra Pradesh’s Eluru district late on Wednesday, Hindustan Times reported.

Deputy police superintendent B Srinivasulu cited a preliminary probe and said it suggested the gas leaked due to suspected malfunction and resulted in the explosion. He added over 20 people were working when the explosion took place at a unit of Porus Laboratories Private Limited, which manufactures pharmaceutical intermediaries and specialty chemicals.

Police, fire tenders, and National Disaster Response Force rushed to the scene around midnight to rescue and evacuate people from the nearby colonies in view of the gas leak. “The fire was extinguished within a couple of hours and the situation was brought back to normalcy,” said Srinivasulu.

He added five workers were charred to death on the spot while another worker succumbed while being rushed to hospital. “Some of the seriously injured workers were shifted to Vijayawada.”

Police superintendent Rahul Dev Sharma, who rushed to the scene, said the cause of the gas leakage was being ascertained.

Andhra Pradesh chief minister Y S Jagan Mohan Reddy announced ₹25 lakh compensation each for the kin of the those killed, ₹5 lakh each for the seriously injured, and ₹2 lakh each for the other injured. He asked authorities to order an inquiry and to ensure the best possible treatment for the injured.