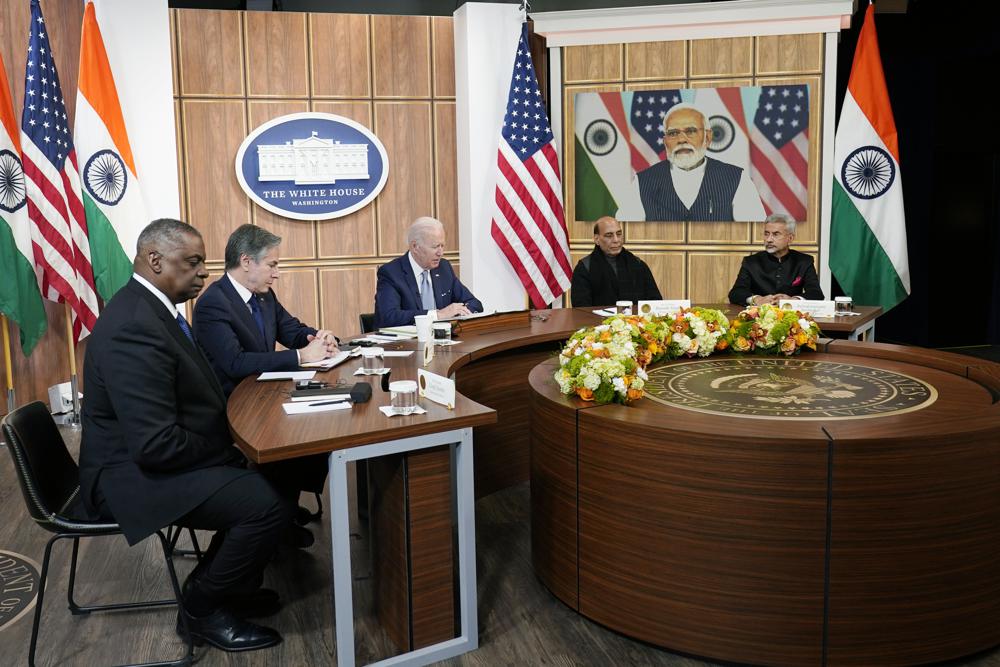 President Joe Biden asked India’s Narendra Modi on Monday not to accelerate the buying of Russian oil as the U.S. and other nations try to cut off Moscow’s energy income following the invasion of Ukraine. The Indian prime minister made no public commitment to refrain from Russian oil, a source of tension with the U.S, Associated Press reported.

Meeting by video call, Biden told Modi that the U.S. could help India diversify its sources of energy, according to press secretary Jen Psaki. Even though India receives little of its oil from Russia, it stepped up recently with a major purchase as other democracies are trying to isolate Russian President Vladimir Putin.

“The president also made clear that he doesn’t believe it’s in India’s interest to accelerate or increase imports of Russian energy or other commodities,” Psaki said.

At a separate State Department news conference with Secretary of State Antony Blinken, Indian Foreign Minister Subrahmanyam Jaishankar pointedly suggested that Europe, not India, be the focus of Washington’s concern about energy purchases from Russia, according to Associated Press.

“I suspect, looking at the figures, probably our total purchases for the month would be less than what Europe does in an afternoon,” he said.

While Biden and Modi ended their session with Biden saying they committed to strengthening their relationship, White House officials could not say if India stood with them in fully condemning Putin, saying the choice ultimately rested with Modi’s government. The two leaders will meet in person May 24 in Tokyo for a summit of the Quad, a coalition that also includes Australia and Japan.

At the State Department news conference, Blinken appeared to seek to cajole India into taking a stronger stance on the conflict in Ukraine, appealing to the country’s interest in upholding the international rules-based order and pointing out that resource-stretched Indians may be affected by both energy and food shortages caused by the war.

“Russia’s aggression stands in stark contrast to the vision that the United States and India share for a free and open Indo-Pacific, and Russia’s actions are having a profound impact not just in Europe and Ukraine, but around the world, for example, causing food insecurity and rising prices,” Blinken told reporters after the meetings concluded.

India’s neutral stance in the war has raised concerns in Washington and earned praise from Russian Foreign Minister Sergey Lavrov, who lauded India this month for judging “the situation in its entirety, not just in a one-sided way.”

Biden opened the video conversation by emphasizing the defense partnership between the two countries and by saying the U.S. and India are going to “continue our close consultation on how to manage the destabilizing effects of this Russian war” on food and other commodities.

“The root of our partnership is a deep connection between our people, ties of family, of friendship and of shared values,” the U.S. president said.

Modi on Monday called the situation in Ukraine “very worrying,” and he noted that an Indian student lost his life during the war. He said he has spoken with Putin and Ukrainian President Volodymyr Zelenskyy, appealing to both of them for peace. India has condemned the killings uncovered in the city of Bucha and has called for an independent investigation.

A senior U.S. official described the Biden-Modi exchange as warm and productive, though the official stressed that India would make its own decisions on how to respond to Putin. The official insisted on anonymity to discuss the meeting.

Biden and Modi discussed how to manage the risks of global instability regarding food, humanitarian relief and climate change, and Modi candidly shared his views about some of the tight links between Russia and China that raise concerns, the official said.

Austin appealed to India to act together with fellow democracies, a form of government based on the popular consent of the people that stands in contrast to autocracies such as China and Russia.

“Now more than ever, democracies must stand together to defend the values that we all share,” Austin said.

India has refrained from some efforts to hold Russia accountable for its invasion. India abstained when the U.N. General Assembly voted Thursday to suspend Russia from its seat on the 47-member Human Rights Council over allegations that Russian soldiers in Ukraine engaged in rights violations that the U.S. and Ukraine have called war crimes.

Last month, the state-run Indian Oil Corp. bought 3 million barrels of crude from Russia to secure its needs, resisting entreaties from the West to avoid such purchases. India isn’t alone in buying Russian energy, however. Several European allies such as Germany have continued to do so, despite public pressure to end these contracts.

Iraq is India’s top supplier, with a 27% share. Saudi Arabia is second at around 17%, followed by the United Arab Emirates with 13% and the U.S. at 9%, the Press Trust of India news agency reported.