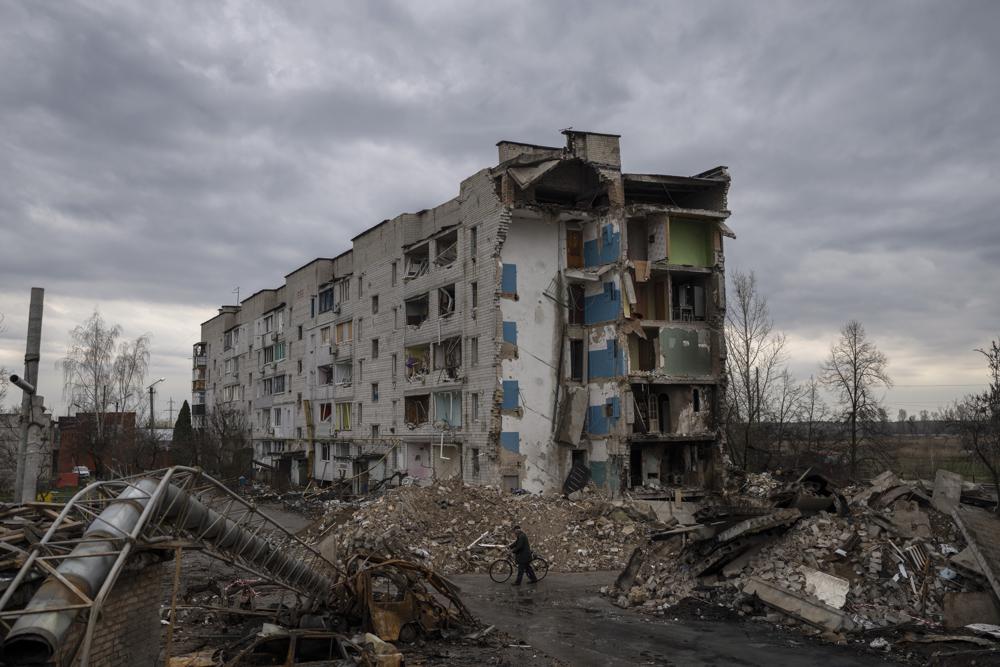 Ukrainian President Volodymyr Zelenskyy said late Saturday that democratic countries are united in working to stop the Russian invasion as civilians continued to flee eastern parts of the country before an expected onslaught and firefighters searched for survivors in a northern town no longer occupied by Russian forces, Associated Press reported.

In his daily late-night video address to Ukrainians, Zelenskyy said that “Russian aggression was not intended to be limited to Ukraine alone” and the “entire European project is a target for Russia.”

Several European leaders have made efforts to show solidarity with the battle-scarred nation. Zelenskyy thanked the leaders of Britain and Austria for their visits Saturday to Kyiv, Ukraine’s capital, and pledges of further support. He also thanked the European Commission president and Canada’s prime minister for a global fundraising event that brought in more than 10 billion euros ($11 billion) for Ukrainians who have fled their homes.

Zelenskyy repeated his call for a complete embargo on Russian oil and gas, which he called the sources of Russia’s “self-confidence and impunity.”

“Freedom does not have time to wait,” Zelenskyy said. “When tyranny begins its aggression against everything that keeps the peace in Europe, action must be taken immediately.”

More than six weeks after the invasion began, Russia has pulled its troops from the northern part of the country, around Kyiv, and refocused on the Donbas region in the east. Western military analysts said an arc of territory in eastern Ukraine was under Russian control, from Kharkiv — Ukraine’s second-largest city — in the north to Kherson in the south, according to the Associated Press.

But counterattacks are threatening Russian control of Kherson, according to the Western assessments, and Ukrainian forces are repelling Russian assaults elsewhere in the Donbas, a largely Russian-speaking and industrial region.

Civilians were evacuating eastern Ukrainefollowing a missile strike Friday that killed at least 52 people and wounded more than 100 at a train station where thousands clamored to leave.

Ukrainian authorities have called on civilians to get out ahead of an imminent, stepped-up offensive by Russian forces in the east. With trains not running out of Kramatorsk on Saturday, panicked residents boarded buses or looked for other ways to leave, fearing the kind of unrelenting assaults and occupations by Russian invaders that brought food shortages, demolished buildings and death to other cities.

“It was terrifying. The horror, the horror,” one resident told British broadcaster Sky, recalling Friday’s attack on the train station. “Heaven forbid, to live through this again. No, I don’t want to.”

Zelenskyy called the train station attack the latest example of war crimes by Russian forces and said it should motivate the West to do more to help his country defend itself.

Russia denied responsibility and accused Ukraine’s military of firing on the station to turn blame for civilian casualties on Moscow. A Russian Defense Ministry spokesman detailed the missile’s trajectory and Ukrainian troop positions to bolster the argument, according to the Associated Press.