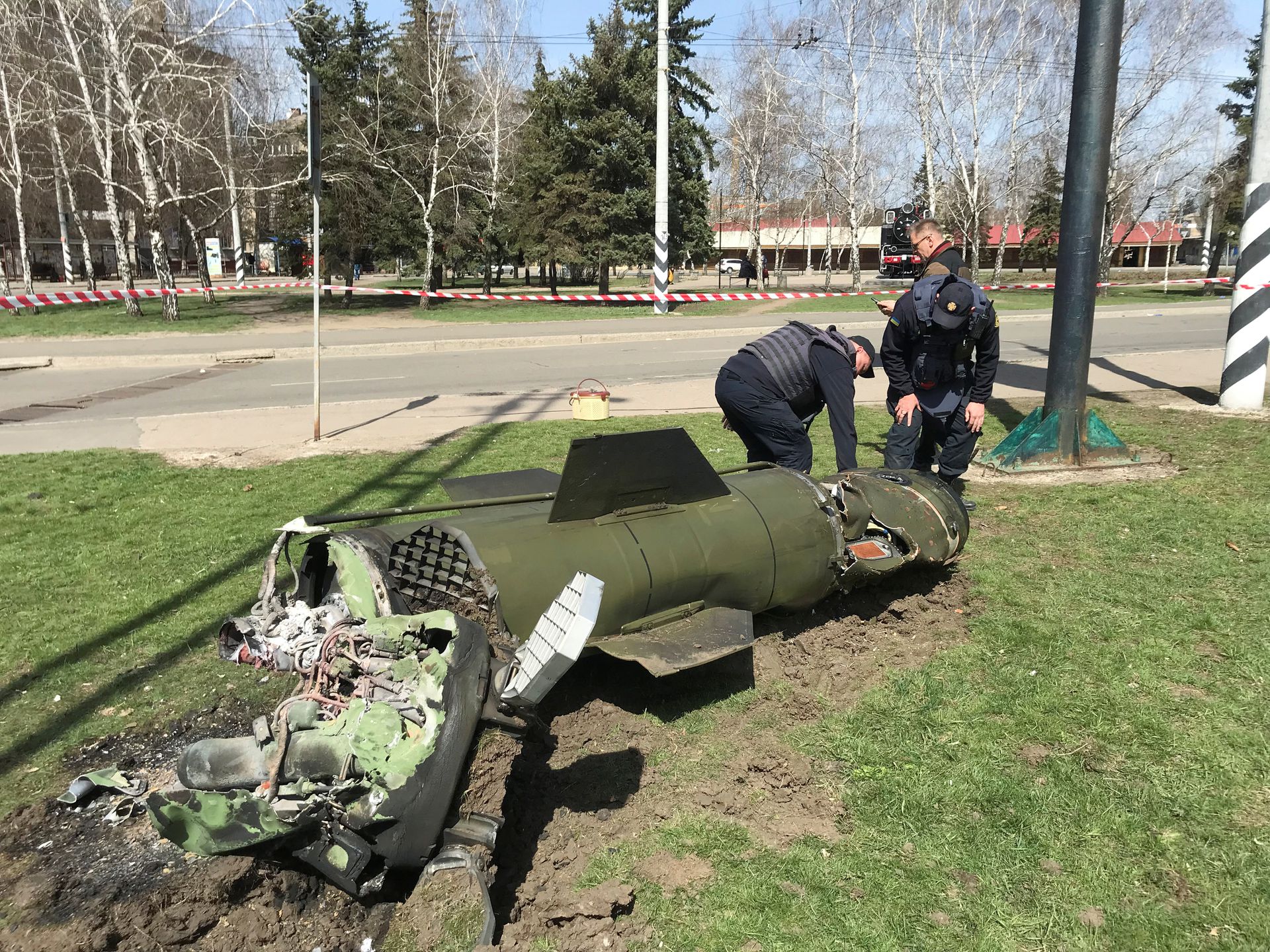 Ukraine said at least 50 people were killed on Friday and many more wounded in a rocket strike at a railway station packed with civilians fleeing the threat of a major Russian offensive in the country’s east, Reuters reported.

As regional authorities scrambled to evacuate the vulnerable, European Union leaders visited Kyiv to offer President Volodymyr Zelenskiy support and assure him there would be a path to EU membership for Ukraine.

Zelenskiy called the strike on the station in Kramatorsk in the eastern region of Donetsk a deliberate attack on civilians. The town’s mayor estimated that about 4,000 people were gathered there at the time.

“They wanted to sow panic and fear, they wanted to take as many civilians as possible,” he said, adding that evacuations by rail from the region, where Ukrainian officials are anticipating a new thrust by Russian forces, would continue.

Reuters was unable to verify what happened in Kramatorsk.

The use of cluster munitions is banned under a 2008 convention. Russia has not signed it but has previously denied using such armaments in Ukraine.

The Russian defence ministry was quoted by RIA news agency as saying the missiles said to have struck the station were used only by Ukraine’s military and that Russia’s armed forces had no targets assigned in Kramatorsk on Friday.

Zelenskiy said no Ukrainian troops were at the station. “Russian forces (fired) on an ordinary train station, on ordinary people,” he told Finland’s parliament in a video address.

Kramatorsk Mayor Oleksander Honcharenko said some victims of the attack had lost a leg or arm. “The hospitals are carrying out about 40 operations simultaneously,” he told an online briefing.

The White House decried the “horrific and devastating images” of the attack which EU foreign policy chief Josep Borrell, in Kyiv with the head of the EU executive Ursula von der Leyen, condemned on Twitter as “yet another attempt to close escape routes for those fleeing this unjustified war.”

Ukrainian officials say Russia’s military is regrouping after withdrawing eastwards from the zone around Kyiv, where a forensics team on Friday began exhuming a mass grave in the town of Bucha.

The grave’s discovery last week galvanised the West into toughening sanctions against Russia and speeding up arms deliveries to Ukraine.

Since Russian troops pulled back from Bucha, Ukrainian officials say hundreds of dead civilians have been found there.

Visiting the town on Friday, von der Leyen said it had witnessed the “unthinkable” and that said the EU would do everything to support Ukraine in securing membership of the bloc.

Russia has called allegations that its forces executed civilians in Bucha a “monstrous forgery” aimed at denigrating its army.

Moscow has denied targeting civilians since invading Ukraine on Feb. 24 in what it calls a “special military operation” to demilitarise and “denazify” its neighbour.

Ukraine and Western supporters call that a pretext for an unprovoked invasion that has displaced a quarter of the population and killed or injured thousands.

Ukrainian officials have in recent days urged civilians to flee eastern areas ahead of an expected attempt by Russian forces to gain full control of Donetsk and neighbouring Luhansk, both partly held by Moscow-backed separatists since 2014.

The Kremlin said on Friday the “special operation” could end in the “foreseeable future” with its aims being achieved with work by the Russian military and peace negotiators.

Russian forces have however failed to take any major cities so far, confronted by unexpectedly strong Ukrainian resistance and dogged by what Western intelligence officials say have been logistical, supply and morale problems.

Kyiv has called on its allies for deliveries of more, heavier weapons needed to respond and on Thursday secured a new commitment from the NATO alliance to supply a wide range of weapons.

Ukraine’s military general staff said on Friday that Russian troops were focused on capturing the besieged southeastern port of Mariupol, fighting near the eastern city of Izyum and breakthroughs by Ukrainian forces near Donetsk.

Residents of areas north of Kyiv were meanwhile still coming to terms with the month-long occupation.

In the village of Yahidne, residents recounted how more than 300 people were trapped for weeks in a school basement, with names of those who did not survive or were killed by soldiers scrawled on the wall.

The West has imposed more sanctions on Russia since the images surfaced, with Washington sanctioning top Russian lenders and President Vladimir Putin’s daughters, a move echoed by Britain on Friday, while the EU banned nearly 20 billion euros worth of trade, including Russian coal.

Zelenskiy has urged Brussels to also ban Russian oil and gas. Borrell said a potential oil ban would be discussed on Monday in Brussels, but called oil sanctions “a big elephant in the room” given concerns over its impact on Europe’s economy and its consumers.