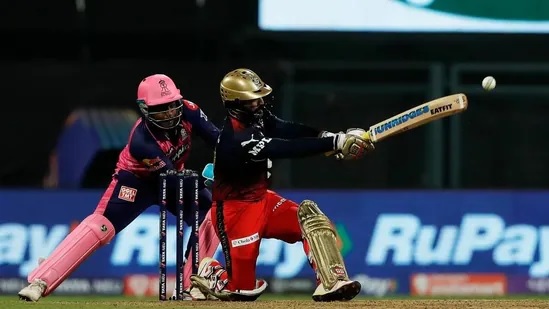 Faf du Plessis and Anuj Rawat got RCB off to a good start but that was undone by them losing four wickets in the space of two overs, Hindustan Times reported.

Dinesh Karthik then walked in and has since taken the chase by the scruff of the neck. Karthik and Shahbaz Ahmed, who also joined his senior partner in sending the RR bowlers to all corners of the park, ended up putting up 67 runs off 33 balls for the sixth wicket.

The pair took the game away from them and RCB ended up getting over the line with five balls in hand. Earlier, Jos Buttler was the driving force for Rajasthan Royals once again with his unbeaten 70 off 47 balls led them to a score of 169/3 in 20 overs.

Buttler struggled to score for much of the innings but teed off in the last two overs to take RR close tom 170 on what seems like a sluggish pitch.

Shimron Hetmyer, meanwhile, finished the innings off with a score and ended up with a score of 42 off 31. The pair put up an unbeaten 83 off 51 balls for the fourth wicket. Buttler was dropped twice and he ended up playing through the innings.