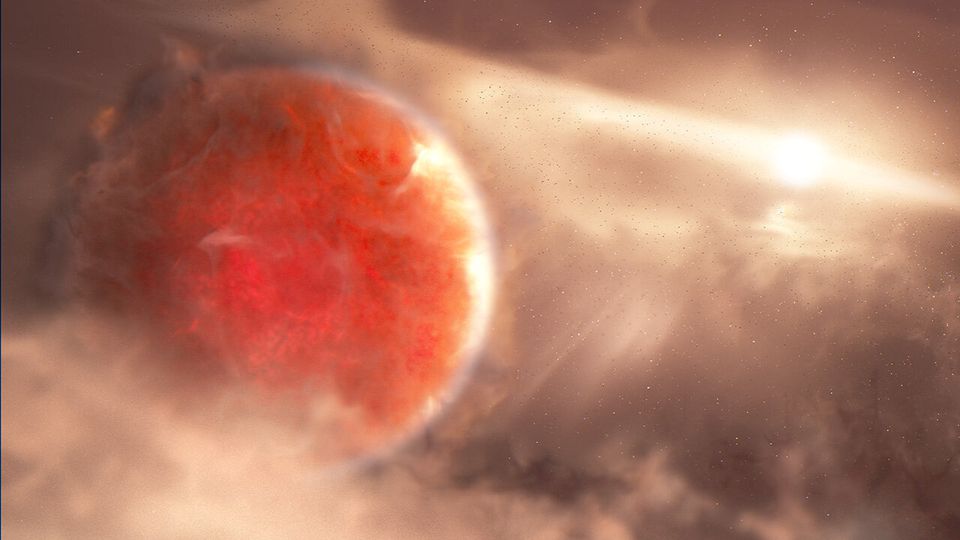 Scientists have observed an enormous planet about nine times the mass of Jupiter at a remarkably early stage of formation – describing it as still in the womb – in a discovery that challenges the current understanding of planetary formation, Reuters reported.

The researchers used the Subaru Telescope located near the summit of an inactive Hawaiian volcano and the orbiting Hubble Space Telescope to detect and study the planet, a gas giant orbiting unusually far from its young host star. Gas giants are planets, like our solar system’s largest ones Jupiter and Saturn, composed mostly of hydrogen and helium, with swirling gases surrounding a smaller solid core.

“We think it is still very early on in its ‘birthing’ process,” said astrophysicist Thayne Currie of the Subaru Telescope and the NASA-Ames Research Center, lead author of the study published on Monday in the journal Nature Astronomy. “Evidence suggests that this is the earliest stage of formation ever observed for a gas giant.”

It is embedded in an expansive disk of gas and dust, bearing the material that forms planets, that surrounds a star called AB Aurigae located 508 light years – the distance light travels in a year, 5.9 trillion miles (9.5 trillion km) – from Earth. This star got a fleeting moment of fame when its image appeared in a scene in the 2021 film “Don’t Look Up.”

About 5,000 planets beyond our solar system, or exoplanets, have been identified. This one, called AB Aur b, is among the largest. It is approaching the maximum size to be classified as a planet rather than a brown dwarf, a body intermediate between planet and star. It is heated by gas and dust falling into it.

Planets in the process of formation – called protoplanets – have been observed around only one other star.

Almost all known exoplanets have orbits around their stars within the distance that separates our sun and its most faraway planet Neptune. But this planet orbits three times as far as Neptune from the sun and 93 times Earth’s distance from the sun.

Its birth appears to be following a different process than the standard planetary formation model.

“The conventional thinking is that most – if not all – planets form by slow accretion of solids onto a rocky core, and that gas giants go through this phase before the solid core is massive enough to start accreting gas,” said astronomer and study co-author Olivier Guyon of the Subaru Telescope and the University of Arizona.

In this scenario, protoplanets embedded in the disk surrounding a young star gradually grow out of dust- to boulder-sized solid objects and, if this core reaches several times Earth’s mass, then begin accumulating gas from the disk.

Instead, the researchers believe AB Aur b is forming in a scenario in which the disk around the star cools and gravity causes it to fragment into one or more massive clumps that form into planets.

The star AB Aurigae is about 2.4 times more massive than our sun and almost 60 times brighter. It is about 2 million years old – an infant by stellar standards – compared to about 4.5 billion years for our middle-aged sun. The sun early in its life also was surrounded by a disk that gave rise to Earth and the other planets.

“New astronomical observations continuously challenge our current theories, ultimately improving our understanding of the universe,” Guyon said. “Planet formation is very complex and messy, with many surprises still ahead.”