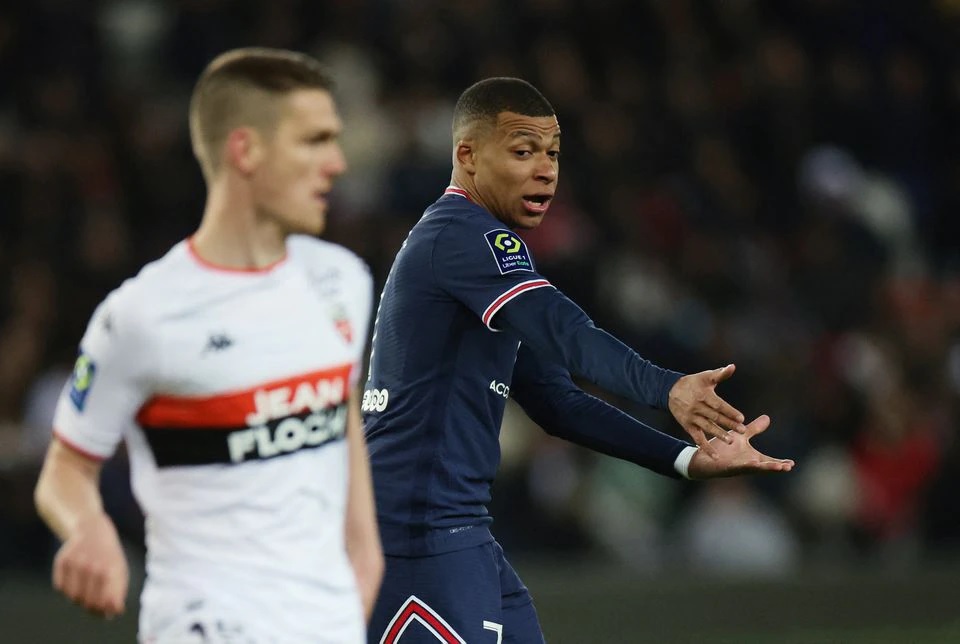 Paris St Germain’s Kylian Mbappe played chief tormentor on a memorable night for the France forward as he scored two and set up the other goals as the runaway Ligue 1 leaders demolished visitors Lorient 5-1 on Sunday, Reuters reported.

In a game where Lionel Messi and Neymar, with a double, also scored, the French champions’ attacking trio combined superbly at times to deliver a performance in sharp contrast with last month’s embarrassing 3-0 defeat at Monaco.

The result put PSG on 68 points from 30 games, 12 ahead of second-placed Olympique de Marseille, who earlier earned a 4-2 comeback win at relegation-threatened St Etienne.

Lorient, who scored a second-half goal through Terem Moffi to make it 2-1, are 16th on 28 points.

“We’re happy to win but we know this league is difficult to win so we must continue to show we can get the title,” said Neymar.

“The Champions League exit (against Real Madrid) hurt us a lot because we wanted to go all the way. It was hard for the fans to take in, but it was even harder for us.”

PSG went ahead after a fine combination between Messi, Neymar and Mbappe in the 12th minute.

The France forward collected a pass from Messi and flicked the ball into the path of Neymar, who beat Matthieu Dreyer from close to the penalty spot.

Mbappe doubled the advantage after 28 minutes with a clinical shot at the near post after being set up by Idrissa Gueye.

Messi came close to adding a third before halftime as he stretched his leg to deflect a high ball from Neymar but his effort went just wide.

Lorient were given a lifeline early in the second half when a woeful back pass from Achraf Hakimi was picked up by Moffi who went on to easily beat goalkeeper Gianluigi Donnarumma to reduce the arrears.

But Mbappe took the match into his own hands again and restored a two-goal lead with another shot at the near post, from just outside the area this time.

The Parc des Princes crowd, who were chanting his name, came to the boil again six minutes later as Mbappe powered through Lorient’s half and, after a one-two with Gueye, found Messi with a cut back inside the area.

The Argentine forward, from near the spot, fired into the roof of the net to put the result beyond doubt.

Mbappe finished the comfortable win off in style with a precise through ball to set up Neymar and the Brazilian fired home a low shot in the last minute.