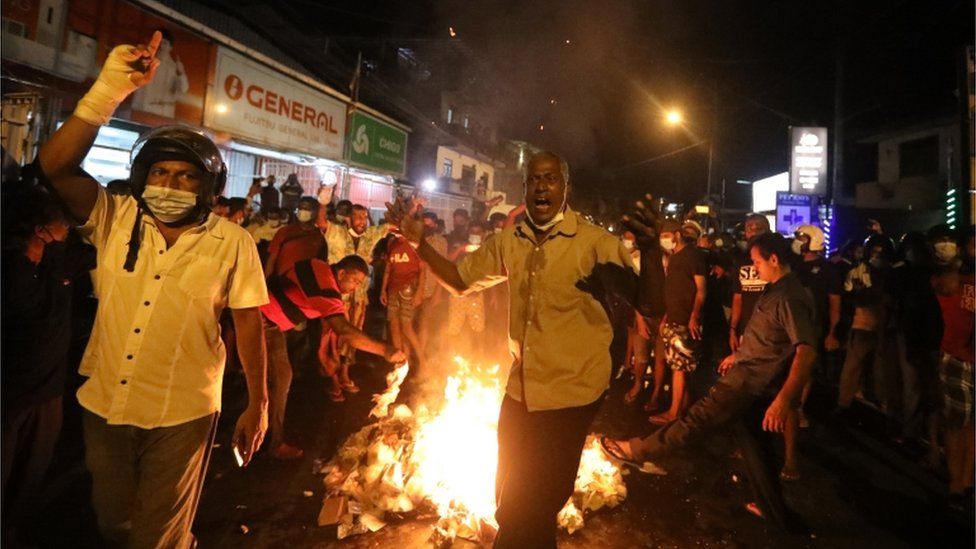 Agitated protesters stormed through barricades, and were accused of setting fire to a bus on Thursday night.

Sri Lanka is in the midst of a foreign exchange crisis that has crippled its economy.

Protesters retaliated against the police by pelting them with rocks, according to BBC.

The demonstrations mark a massive turnaround in popularity for Mr Rajapaksa who swept into power with a majority win in 2019, promising stability and a “strong hand” to rule the country.

Critics have been pointing to rank corruption and nepotism – his brothers and nephews occupy several key ministerial portfolios – as one of the main reasons for the situation the country has found itself in.

News reports that the president and his ministers are exempt from the power cuts, along with opulent displays of wealth by family members, have only increased anger.

The government has been blaming the crisis on the pandemic’s impact on tourism – one of the island nation’s main sources of foreign revenue – along with a series of attacks on churches on Easter Sunday 2019 which led to a marked drop in tourists.

But experts say that this crisis has been a long time in the making.

“This is an implosion, an accumulated outcome of what has been building up for a couple of decades and as usual there is no one to take responsibility for it. Of course, the present government is directly responsible for its wilful mismanagement of the crisis since they came into power in 2019 by sheer incompetency, arrogance and of course corruption,” Jayadeva Uyangoda, a political scientist and commentator, told the BBC.

Sri Lanka’s former deputy central bank governor WA Wijewardena told the BBC that Sri Lanka made a fundamental mistake in not integrating with the global economy after the end of a civil war in 2009 which saw its economy grow at rates of almost 9%, BBC reported.

“Exports which accounted for 33% of Gross Domestic Product (GDP) in 2000 have now fallen to 12% and remain at that level,” he said.

In the more immediate term, a government refusal to let the Sri Lankan rupee depreciate also took a massive toll on its foreign reserves.

Mr Wijewardena feels things will get a lot worse before they get better, as there is no sustainable flow of foreign exchange for the heavily import-reliant country.

Sri Lanka no longer has enough dollars to buy essential items like fuel to power vehicles or even generate power.

As a result, the country’s electricity board has been imposing power cuts that have grown longer and longer in duration. On Thursday, power was switched off for 13 hours, with 16-hour cuts expected in the coming days, BBC reported.