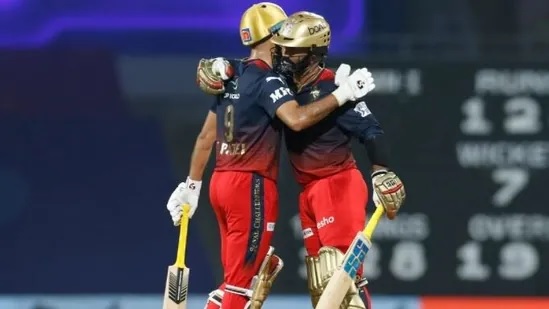 The crowd at the DY Patil Stadium, Nerul is having the best of T20 cricket. On Sunday, they were treated to an exhibition of insane hitting by the batters when both sides scored 200-plus. On Wednesday, the bowlers decided to put on an exhibition, Hindustan Times reported.

After Royal Challengers Bangalore bowlers blew away the Kolkata Knight Riders innings, dismissed for 128 in 18.5 overs, the KKR bowlers took the game to the opposition by taking the game to the final over.

In the end it was seven runs off six balls with three wickets in hand. Veteran Dinesh Karthik finished things off in style by hooking the first ball of the last over by Andre Russell for six to tie the scores before sealing a three-wicket win with a straight drive for four. It is RCB’s first win.

At 101/5 after 16 overs with 29 runs to get, Karthik walked out to bat. KKR captain Shreyas Iyer threw the ball to Sunil Narine. RCB’s chase now depended on Karthik, who knew every trick Narine had, having kept wicket to him till last season. The batter knew he couldn’t take chances and played out the over with just four runs. With 24 to get off 18 balls, the idea was to take on the other bowlers.

There was no respite for RCB as a wily Tim Southee had an over left. In contrast to Sunday, the pitch was aiding the pacers. The New Zealander, who missed KKR’s first game because of his wedding, took two wickets for seven runs. It became 17 runs off 12 balls. Harshal Patel picked up two fours in the 19th over off Venkatesh Iyer to reduce the pressure on Karthik.

Earlier, with the pitch at the D Y Patil Stadium offering more bounce than in Sunday’s game, RCB bowlers stormed back from their poor display in the opening match when they failed to defend a total of 205, bundling out KKR for 128 in 18.5 overs.

Though most of the RCB bowlers’ figures made for impressive reading, spinner Wanindu Hasaranga’s stood out (4-0-20-4).

At one point though, it looked like pacer Harshal Patel would eclipse him when his first two overs proved to be wicket maidens for figures of 2-2-0-2, a rare feat in T20 cricket. The first run off Harshal Patel’s bowing came in the third over when Umesh Yadav slogged for a single to long-on. The early damage was done by Akash Deep, who picked two wickets with the new ball to reduce KKR to 44/3 in 5.5 overs.

KKR’s fightback was again led by Umesh Yadav who bowled three overs on the trot with the new ball to reduce RCB to 17/3 with an opening burst of 3-0-12-2.