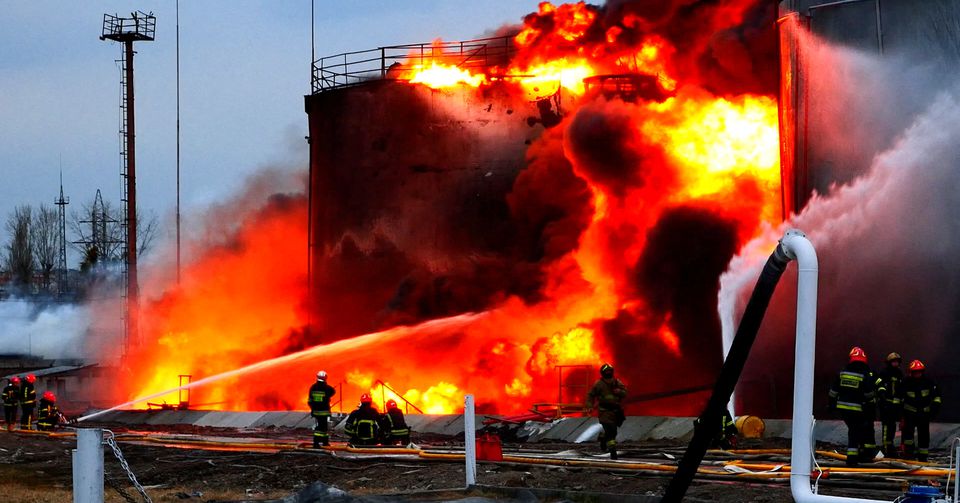 President Volodymyr Zelenskiy has urged the West to give Ukraine tanks, planes and missiles to fend off Russian forces as his government said Moscow’s forces were targeting the country’s fuel and food depots, Reuters reported.

Biden’s improvised remarks during a speech in Warsaw were not a call for regime change in Russia, but meant Putin should not be allowed to exercise power over his neighbours or the region, a White House official said afterward. Moscow dismissed Biden’s comments, saying it was not up to the U.S. president to decide who governed Russia.

The Russian invasion has devastated several Ukrainian cities, caused a humanitarian crisis and forced millions to flee their homes.

In a late-night television address on Saturday, Zelenskiy demanded that Western nations hand over military hardware that was “gathering dust” in stockpiles, saying his nation needed just 1% of NATO’s aircraft and 1% of its tanks.

Western nations have so far given Ukraine anti-tank and anti-aircraft missiles as well as small arms and protective equipment, but have not offered any heavy armour or planes.

“We’ve already been waiting 31 days. Who is in charge of the Euro-Atlantic community? Is it really still Moscow, because of intimidation?” Zelenskiy said, suggesting Western leaders were holding back on supplies because they were frightened of Russia.

Ukrainian Interior Ministry adviser Vadym Denysenko said on Sunday that Russia had started destroying Ukrainian fuel and food storage centres, meaning the government would have to disperse stocks of both in the near future.

Appearing to confirm that, the Russian defence ministry said its missiles had wrecked on Saturday a fuel deposit as well as a military repair plant near the western city of Lviv, just 60 km (40 miles) from the Polish border.

Local officials said four missiles had hit the city, sending plumes of black smoke into the sky, in a rare strike on the west of Ukraine with much of the fighting since the Feb. 24 Russian invasion so far focused on southern and eastern regions and near the capital Kyiv in the north.

Biden drew criticism for his remarks at the end of a speech that sought to frame the war as part of a historic struggle for democratic freedoms.

“For God’s sake, this man cannot remain in power,” said Biden, who earlier in the day called Putin a “butcher”.

“I suggest his chief aides reach their counterparts & make clear US (is) prepared to deal with this Russian (government),” he wrote.

Moscow says the goals for what Putin calls a “special military operation” include demilitarising and “denazifying” its neighbour. Ukraine and its Western allies calls this a pretext for an unprovoked invasion.

Russia has failed to seize any major Ukrainian city since its troops started pouring into the country on Feb. 24.

In its latest military assessment, the British Ministry of Defence said Russian forces appeared to be concentrating their efforts to attempt the encirclement of Ukrainian forces directly facing separatist regions in the east of the country.

The General Staff of Ukraine’s Armed Forces said on Sunday that Russia continued with its “full-scale armed aggression”, while Ukrainian forces had repulsed seven attacks in the eastern regions of Donetsk and Luhansk.

The Interior Ministry adviser Denysenko said Russia was bringing forces to the border on rotation and could make fresh attempts to advance in its invasion. Moscow has repeatedly said its operations are going to plan, but Western leaders say the assualt has largely stalled in the face of fierce resistence.

Reuters could not independently verify the accounts of fighting throughout Ukraine.

Ukraine and Russia have agreed two “humanitarian corridors” to evacuate civilians from frontline areas on Sunday, including allowing people to leave by private car from the southern city of Mariupol, Deputy Prime Minister Iryna Vereshchuk said.

The encircled port, which lies between Russian-annexed Crimea and eastern areas held by Russian-backed separatists, has been devastated by weeks of heavy bombardment, forcing thousands of residents to take shelter in basements with scarse water, food, medicine or power.

The U.N. has confirmed 1,104 civilian deaths and 1,754 injuries across Ukraine but says the real toll is likely to be higher. Ukraine said on Sunday that 139 children have been killed and more than 205 wounded.