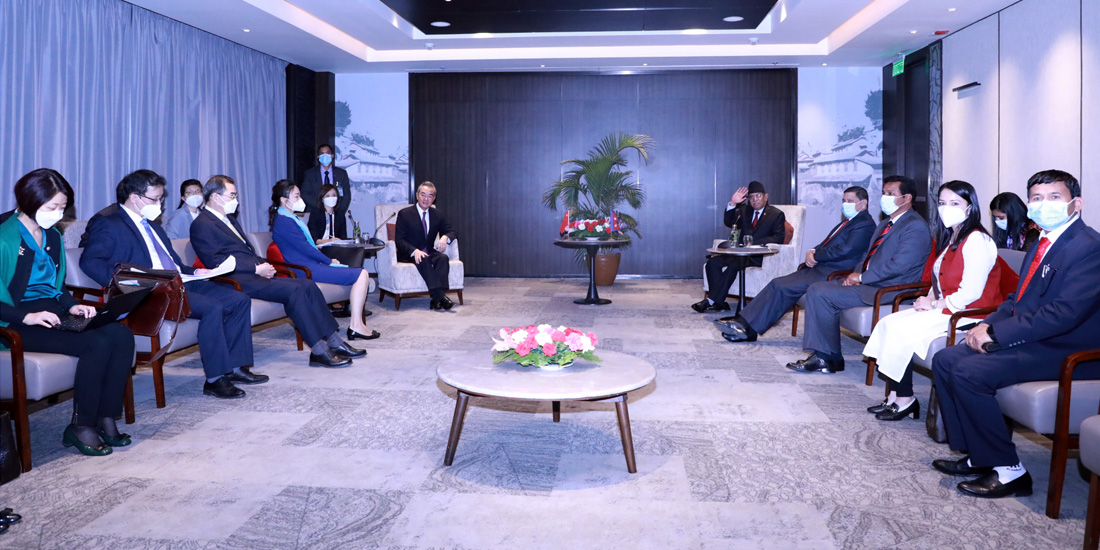 KATHMANDU: The ruling coalition partner, CPN (Maoist Centre), has urged the Government of China to expeditiously bring into implementation projects related to physical infrastructures being forwarded under the Belt and Road Initiative (BRI).

The Maoist Centre expressed that taking forward these projects considered important for Nepal’s economic and social development in a timely manner would have a positive impact and through Foreign Minister Wang it urged the Chinese government for this.

The Maoist Centre made this request during the courtesy call by the State Councilor of the People’s Republic of China and Foreign Affairs Minister Wang, on Maoist Centre Chair Pushpa Kamal Dahal ‘Prachanda’ today. Wang arrived here on Friday on a three-day visit at the friendly invitation of Minister for Foreign Affairs Dr Narayan Khadka.

Maoist leader Shakti Basnet said during the meeting they drew the attention of the Chinese Foreign Minister to create an environment conducive for the smooth operation of the Tatopani and Rasuwagadhi checkpoints which have not come into regular operation for long due to the COVID-19 pandemic.

According to him, various dimensions of Nepal-China relations were also discussed on the occasion.
Maoist Centre Chair Prachanda, expounding on the friendly ties between Nepal and China, reiterated Nepal’s commitment of not allowing any anti-China activities on Nepali soil.” Nepal is always steadfast on the one-China policy and we will not allow Nepal’s territory to be used against any country,” he said.

Chairman Prachanda said they believe that projects related to BRI to which China has committed and which are tied to Nepal’s economic development would be forwarded.

On behalf of the Maoist Center, the Chinese foreign minister has been urged to help reduce Nepal’s trade deficit with China. The increasing trade deficit of the country has been affected by affected transits with China due to COVID-19. The Maoist Center leadership offered a ‘special’ thank to the Government of China for its assistance to Nepal during the virus.

In response, the Chinese minister on behalf of the Chinese government continued its assistance in the economic and social development of Nepal.

China as a neighbour and as a country that has traditionally friendly relations with Nepal, has been supporting and would continue the country’s eagerness for its development, he said.

Earlier on Saturday, he paid a courtesy call on Prime Minister Sher Bahadur Deuba. Prior to that, he met with a delegation from the Office of Prime Minister and Council of Ministers. During the talks, a nine-point memorandum of understanding was reached. RSS