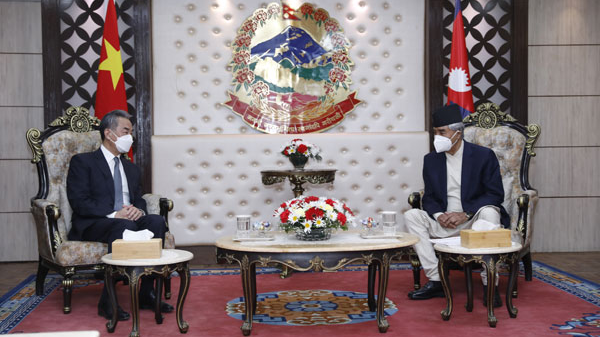 Chinese State Councilor and Foreign Minister Wang Yi and Nepali Prime Minister Sher Bahadur Deuba agreed on Saturday at their meeting in Kathmandu that both sides would make good use of the Nepal-China Joint Consultation Mechanism to complete existing key cooperation projects and explore new areas of cooperation, CGTN reported.

Noting that China-Nepal cooperation enjoys vast potential, both sides agreed that deepening practical cooperation not only meets the needs of both countries, but will also inject strong impetus to regional development and prosperity.

Deuba congratulated China on the success of the Beijing 2022 Olympic Winter Games, and thanked China for providing strong support for Nepal’s economic and social development over the years.

Deuba stressed that Nepal will continue to firmly adhere to the one-China policy and will never allow any forces to use the Nepali territory to engage in any anti-China activities.

Wang said China appreciated that and is ready to continue standing firmly with Nepal on issues involving each other’s core interests and major concerns.

China will work with Nepal to safeguard the principle of non-interference in internal affairs and the basic norms governing international relations, resist unilateralism and oppose power politics, and contribute to regional peace and stability, Wang said.

The two sides also exchanged views on strengthening multilateral cooperation. Deuba said the Nepali side believes that fairness and justice should be upheld in international affairs, and the United Nations Charter and international law should be abided by.

After the meeting, both sides attended the completion ceremony of Pokhara International Airport via video link.

During the same day, Wang also held talks with Nepali Foreign Minister Narayan Khadka, saying that China will stick to its friendly policy toward Nepal and deepen mutually beneficial cooperation with the South Asian country.

Wang stressed that China will unswervingly implement friendly policies toward Nepal, while deepening mutually beneficial cooperation, no matter how the international and domestic situations of the two countries change.

China will support Nepal in finding a development path suited to its national conditions. China’s friendly policy is open to all parties and party factions, and the people of Nepal, he said.

China will unswervingly push forward the building of a community with a shared future between China and Nepal, he added.

The Chinese diplomat also voiced support for Nepal to pursue independent domestic and foreign policies. China always believes that all countries are equal regardless of size, and respects the sovereignty, independence and territorial integrity of all countries, he said.

In addition, he said China supports Nepal participating more actively in the construction of the Belt and Road Initiative (BRI), mentioning the fruitful results seen in cooperation in electricity, economy and people-to-people exchanges.