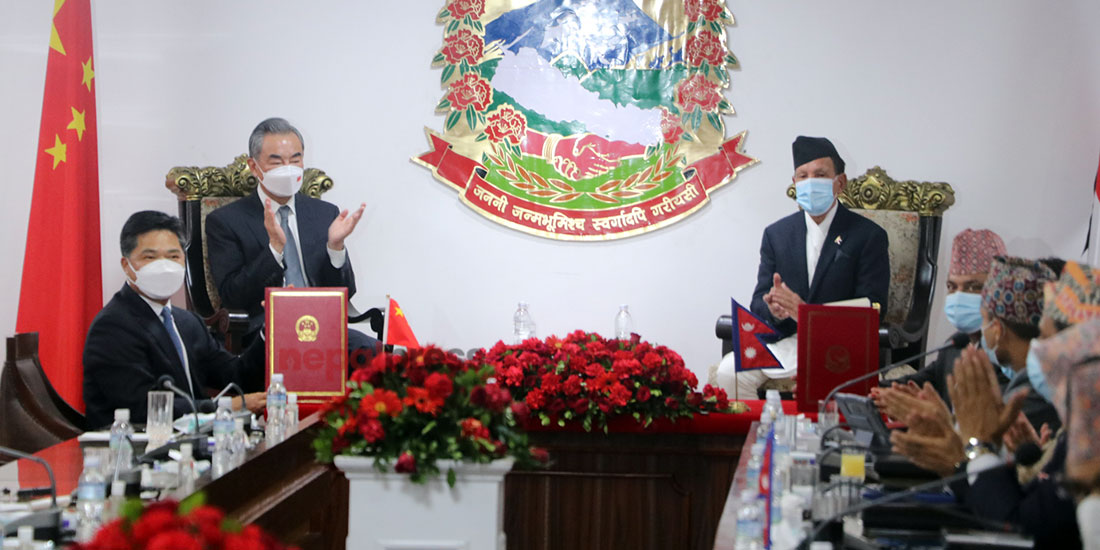 KATHMANDU: Nepal and China have inked nine sets of instruments to enhance mutual cooperation and partnership.

Both countries have agreed to further strengthen the cooperative relationship and partnership between Nepal and China. Such an agreement was reached during the Nepal-China Foreign Minister level talks held here today. After bilateral talks between Foreign Minister Dr Narayan Khadka and Chinese State Councilor and Foreign Minister Wang Yi, officials from both countries also signed nine sets of agreements on enhancing mutual cooperation.

The agreement on economic and technical cooperation, and technical assistance schemes for China aid and feasibility study of China-Nepal cross-border railway project in Nepal were signed by Finance Secretary Madhu Kumar Marasini from the Nepali side and Ambassador of Nepal to China Hou Yanqi.

Likewise, the cooperation agreement on the feasibility study of China-Nepal power grid interconnection was signed by the Secretary of Ministry of Energy, Water Resources and Irrigation, Devendra Karki and Ambassador Yanqi.

Similarly, Secretary at Ministry of Physical Infrastructure and Transport Rabindra Nath Shrestha and Assistant Minister at Ministry of Commerce and of China, Sheng Qiuping signed the handover certificate of Araniko highway maintenance project (phase-3) and minutes of the 7th meeting on enhancing cooperation in the Railway sector.

In addition, the delivery and acceptance certificates of China aid COVID-19 vaccines to Nepal (fifth and sixth batches — million Sinovac Vaccines) was signed by Health Secretary Dr Roshan Pokharel and Assistant Minister at Ministry of Commerce of China, Sheng Qiuping. Likewise, a protocol on sending a China Medical team to work in Nepal was signed by Health Secretary Dr Pokharel and Ambassador Yanqi.

Welcoming his Chinese counterpart to the bilateral talks, Minister Khadka expressed his desire to take the centuries-old Nepal-China relations to a new height. He stressed the need for the timely completion of Chinese-assisted development projects.

He highlighted the adverse impact on the economy of Nepal due to the non-operation of the Nepal-China border trading point, the problems added to the economic activities by the Covid-19 Pandemic, Nepal’s challenges in reviving the economy, declining remittance inflows and other challenges facing the country.

Stressing on the implementation of past treaties and agreements between the two countries, Foreign Minister Khadka requested for the early implementation of the financial assistance announced during the visit of President Xi Jinping to Nepal.

He also drew the attention of the Chinese side to implement the past agreement to expand the Trans Himalayan Multi-dimensional Network for the construction of physical infrastructure in the border area essential for further strengthening people-to-people relations between Nepal and China and promoting bilateral trade and commerce.

On behalf of the Government of Nepal, the Foreign Minister expressed his heartfelt gratitude for providing various health equipment including vaccines in the difficult situation and for the reconstruction of the physical infrastructure destroyed by the earthquake.

The talks were held in an utmost cordial atmosphere, the Foreign Ministers of the two countries also expressed their commitment to cooperate and share issues of mutual interest and common concern.RSS