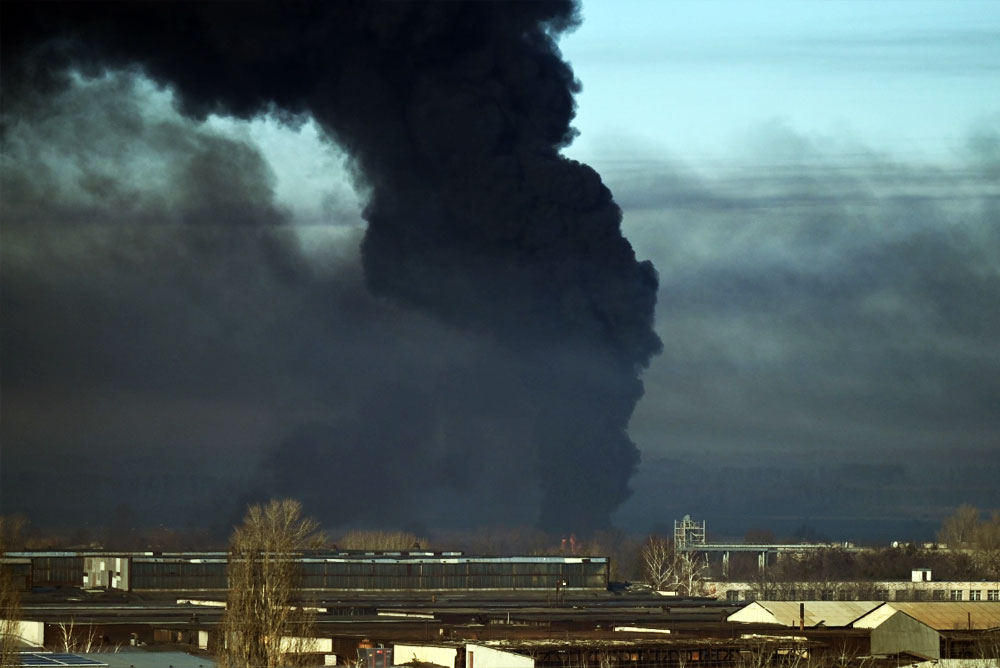 As day broke on Monday, firefighters were putting out small blazes around the smouldering carcass of a building in the shopping centre car park in the Podil district of the city and looking for possible survivors.

The force of the explosion obliterated one structure in the shopping centre car park and gutted an adjacent 10-storey building, shattering windows in the surrounding residential tower blocks.

Six bodies were lain out on the pavement as emergency services combed through the wreckage to the sound of distant artillery fire. Ukraine’s Prosecutor General said at least eight people had been killed.

“High-precision long-range weapons on the night of March 21 destroyed a battery of Ukrainian multiple rocket launchers and a store of ammunition in a non-functioning shopping center,” he told reporters.

Russian forces have pounded some suburbs of the Ukrainian capital, but defenders have so far managed to prevent Kyiv from coming under the kind of full-scale assault that has devastated eastern cities such as Mariupol and Kharkiv.

However dozens of civilians have been killed in Kyiv since Russia launched its invasion on Feb. 24, many in residential buildings hit by missile strikes or debris from missiles shot down by Ukrainian anti-aircraft fire.

“Russia fired at our shopping centre. The mall and the residential buildings around it have suffered terrible damage,” Mykola Medinskiy, an army chaplain, told Reuters, adding there were no strategic military objects in the area.

Reuters was not immediately able to verify that comment. Russia denies targeting civilians.

“It is hard for me to speak because my child worked here. She was at work just yesterday. And then this thing happened last night,” said tearful onlooker Valentina Timofeevna.

After a relatively quiet weekend in Kyiv, the sound of heavy bombardment could be heard to the north of the city, where much of the most intense fighting has taken place.

The bulk of Russian forces remain more than 25 km (15 miles) from the centre of Kyiv, British military intelligence said on Monday.

Thousands of people have been killed in the fighting and about 10 million displaced, including nearly 3.5 million who have fled abroad, mostly to neighbouring European countries such as Poland.

Russian President Vladimir Putin describes the action as a “special military operation” to disarm Ukraine and halt the “genocide” of Russian-speaking people by Ukraine. Kyiv and the West say this is a false pretext for an unprovoked war to subdue a country.