Russians push deeper into Mariupol as locals plead for help 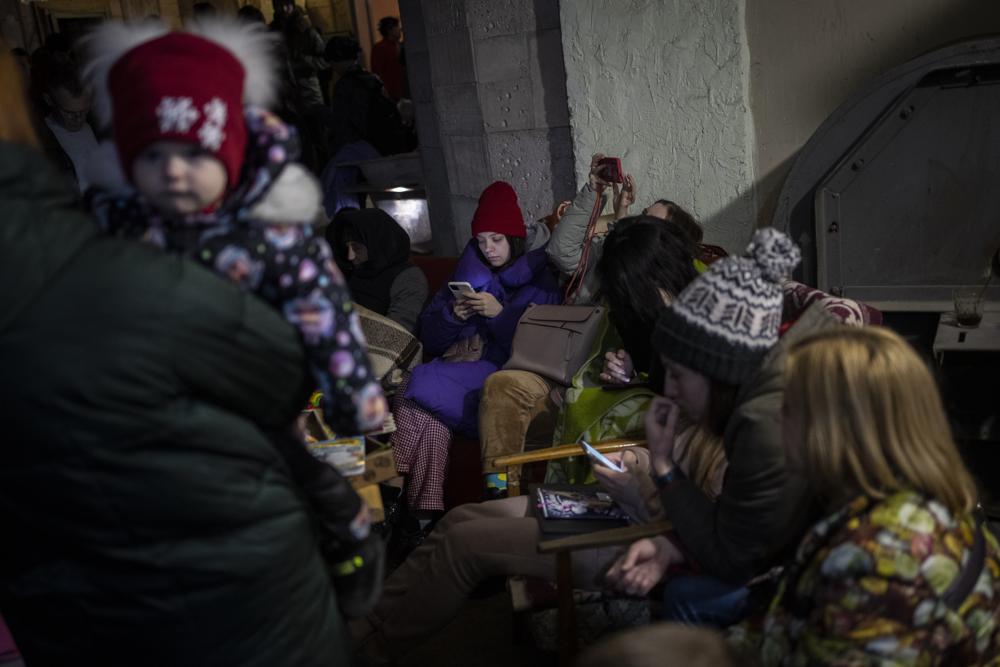 The fall of Mariupol, the scene of some of the war’s worst suffering, would mark a major battlefield advance for the Russians, who are largely bogged down outside major cities more than three weeks into the biggest land invasion in Europe since World War II.

“Children, elderly people are dying. The city is destroyed and it is wiped off the face of the earth,” Mariupol police officer Michail Vershnin said from a rubble-strewn street in a video addressed to Western leaders that was authenticated by The Associated Press.
Russian forces have already cut Mariupol off from the Sea of Azov, and its fall would link Crimea, which Russia annexed in 2014, to eastern territories controlled by Moscow-backed separatists. It would mark a rare advance in the face of fierce Ukrainian resistance that has dashed Russia’s hopes for a quick victory and galvanized the West.

Ukrainian and Russian forces battled over the Azovstal steel plant in Mariupol, Vadym Denysenko, adviser to Ukraine’s interior minister, said. “One of the largest metallurgical plants in Europe is actually being destroyed,” Denysenko said in televised remarks.

The Mariupol city council claimed hours later that Russian soldiers had forcibly relocated several thousand city residents, mostly women and children, to Russia. It didn’t say where, and AP could not immediately confirm the claim.

Oleksiy Arestovych, an adviser to Ukrainian President Volodymyr Zelenskyy, said the nearest forces that could assist Mariupol were already struggling against “the overwhelming force of the enemy” and that “there is currently no military solution to Mariupol.”

Zelenskyy said early Sunday that the siege of Mariupol would go down in history for what he said were war crimes committed by Russian troops.

“To do this to a peaceful city, what the occupiers did, is a terror that will be remembered for centuries to come,” he said in a video address to the nation.

Despite the siege in Mariupol, many remained struck by Ukraine’s ability to hold back its much bigger, better-armed foe. The United Kingdom’s Defense Ministry said Ukraine’s airspace continued to be effectively defended.

“Gaining control of the air was one of Russia’s principal objectives for the opening days of the conflict and their continued failure to do so has significantly blunted their operational progress,” the ministry said on Twitter.

In Mykolaiv, rescuers searched the rubble of the marine barracks that was destroyed in an apparent missile attack Friday. The region’s governor said the marines were asleep when the attack happened.

It wasn’t clear how many marines were inside at the time, and rescuers were still searching the rubble for survivors the following day. But a senior Ukrainian military official, who spoke to The New York Times on condition of anonymity to reveal sensitive information, estimated that as many as 40 marines were killed, which would make it one of the deadliest known attacks on Ukrainian forces during the war.

Estimates of Russian deaths vary widely, but even conservative figures are in the low thousands. Russia had 64 deaths in five days of fighting during its 2008 war with Georgia. It lost about 15,000 in Afghanistan over 10 years, and more than 11,000 in years of fighting in Chechnya.

Pentagon press secretary John Kirby said the U.S. couldn’t confirm the use of a hypersonic missile.

U.N. bodies have confirmed more than 847 civilian deaths since the war began, though they concede the actual toll is likely much higher. The U.N. says more than 3.3 million people have fled Ukraine as refugees.

The northwestern Kyiv suburbs of Bucha, Hostomel, Irpin and Moshchun were under fire Saturday, the Kyiv regional administration reported, and Slavutich, 165 kilometers (103 miles) north of the capital, was “completely isolated.”

Evacuations from Mariupol and other besieged cities proceeded along eight of 10 humanitarian corridors, Deputy Prime Minister Iryna Vereshchuk said, and a total of 6,623 people left.

Waiting to board a bus at a triage center near the Moldova-Ukraine border, a woman named Irina said she decided to leave home in Mykolaiv this week after a loud explosion shook the walls, waking her young daughter.

“Can you imagine the fear I had, not for me but for my child?” said Irina, who didn’t provide her last name. “So we made decision to arrive here, but I don’t know where we are going, where we’ll stay.”

Vereshchuk said planned humanitarian aid for the southern city of Kherson, which Russia seized early in the war, could not be delivered because the trucks were stopped along the way by Russian troops.

Ukraine and Russia have held several rounds of negotiations aimed at ending the conflict but remain divided over several issues, with Moscow pressing for its neighbor’s demilitarization and Kyiv demanding security guarantees.

Russian President Vladimir Putin spoke by phone Saturday for a second time this week with Luxembourg Prime Minister Xavier Bettel. The Kremlin said Putin “outlined fundamental assessments of the course of the talks between Russian and Ukrainian representatives,” while Bettel informed him about “contacts with the leadership of Ukraine and other countries.”

British Foreign Secretary Liz Truss accused Putin of using the talks as a “smokescreen” while his forces regroup. “We don’t see any serious withdrawal of Russian troops or any serious proposals on the table,” she told the Times of London.

U.S. Defense Secretary Lloyd Austin, during a Saturday visit to NATO ally Bulgaria, said the Russian invasion had “stalled on a number of fronts” but the U.S. had not yet seen signs that Putin was deploying additional forces.

Around Ukraine, hospitals, schools and buildings where people sought safety have been attacked.

At least 130 people survived the Wednesday bombing of a Mariupol theater that was being used a shelter, but another 1,300 were believed to be still inside, Ludmyla Denisova, the Ukrainian Parliament’s human rights commissioner, said Friday.

“We pray that they will all be alive, but so far there is no information about them,” Denisova told Ukrainian television.

A satellite image from Maxar Technologies released Saturday confirmed earlier reports that much of the theater was destroyed. It also showed the word “CHILDREN” written in Russian in large white letters outside the building.

Russian forces have fired on eight cities and villages in the eastern Donetsk region in the past 24 hours, including Mariupol, Ukraine’s national police said Saturday. Dozens of civilians were killed or wounded, and at least 37 residential buildings and facilities were damaged including a school, a museum and a shopping center.

In the western city of Lviv, Ukraine’s cultural capital, which was hit by Russian missiles on Friday, military veterans were training dozens of civilians on how to handle firearms and grenades.

“It’s hard, because I have really weak hands, but I can manage it,” said one trainee, 22-year-old Katarina Ishchenko.