After Biden-Xi call, U.S. warns China it could face sanctions if it backs Russia in Ukraine 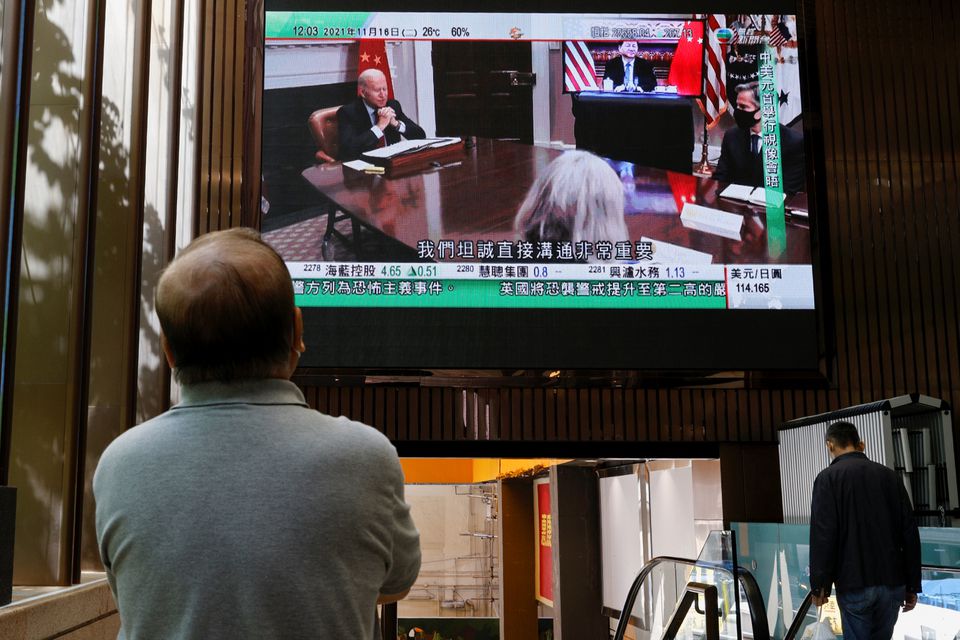 U.S. President Joe Biden warned Chinese leader Xi Jinping on Friday of ‘consequences’ if Beijing gave material support to Russia’s invasion of Ukraine, the White House said, while both sides stressed the need for a diplomatic solution to the crisis, Reuters reported.

While the White House did not detail what those consequences could be, or how the U.S. would define “material support”, press secretary Jen Psaki indicated China’s massive trade flows could be impacted.

“Sanctions are certainly one tool in the tool box,” Psaki told a regular news briefing when asked whether China, the world’s largest exporter, could face trade tariffs or sanctions.

Speaking after a nearly two-hour video call between Biden and Xi, Psaki said the United States would communicate any consequences directly to Beijing “with our European partners and counterparts.”

In the call, which came at a time of deepening acrimony between the world’s two biggest powers, Biden detailed efforts of the United States and its allies to respond to the invasion of Ukraine, including by imposing costs on Russia.

“He described the implications and consequences if China provides material support to Russia as it conducts brutal attacks against Ukrainian cities and civilians,” the White House said in statement, adding that Biden “underscored his support for a diplomatic resolution to the crisis.”

A senior U.S. official briefing reporters on the call said Biden communicated that Beijing would face consequences not just from the United States but the wider world.

“The president really wasn’t making specific requests of China,” the official said. “I think our view is that China will make its own decisions.”

China’s foreign ministry said Xi told Biden the war in Ukraine must end as soon as possible and called on NATO nations to hold a dialogue with Moscow. He did not, however, assign blame to Russia for the invasion, based on Beijing’s statements about the call.

“The top priorities now are to continue dialogue and negotiations, avoid civilian casualties, prevent a humanitarian crisis, cease fighting and end the war as soon as possible,” Xi said.

Xi advocated Russia-Ukraine dialogue and negotiations, and suggested Washington and NATO conduct talks with Russia to solve the “crux” of the Ukraine crisis and resolve the security concerns of both Russia and Ukraine.

“The Ukraine crisis is something that we don’t want to see,” Chinese state media quoted Xi saying in the call, which it said was requested by the U.S. side.

“Sweeping and indiscriminate sanctions would only make the people suffer. If further escalated, they could trigger serious crises in global economy and trade, finance, energy, food, and industrial and supply chains, crippling the already languishing world economy and causing irrevocable losses,” the ministry quoted him as saying.

On Thursday, U.S. Secretary of State Antony Blinken said Washington was concerned China was considering directly assisting Russia with military equipment for use in Ukraine, something Beijing has denied.

Targeting Beijing with the sort of extensive economic sanctions already imposed on Russia would have potentially dire consequences for the United States and the world, given that China is the world’s second-largest economy and the largest exporter.

Russia’s invasion of Ukraine, now in its fourth week, has killed hundreds of civilians, reduced city areas to rubble and sparked a humanitarian crisis as millions flee the country.

China has refused to condemn Russia’s action in Ukraine or call it an invasion.

Russia fired missiles at an airport near Lviv on Friday, a city where hundreds of thousands had sought refuge far from Ukraine’s battlefields, as Moscow tries to regain the initiative in its stalled campaign against Ukraine, which it calls a special military operation.

Ukraine has added a new front in a U.S.-Chinese relationship already at its worst level in decades, further deflating Biden’s initial hopes of easing a wide range of disputes by using a personal connection with Xi that predates his term in office.

Biden has been anxious to avoid a new “Cold War” with China, seeking instead to define the relationship as one of competitive coexistence, but China’s “no-limits” strategic partnership with Russia announced last month and its stance on Ukraine has called that into question.

Ahead of the call, a Chinese aircraft carrier sailed through the sensitive Taiwan Strait on Friday. The USS Ralph Johnson, an Arleigh Burke guided missile destroyer, shadowed the carrier at least partly on its route.

China claims Taiwan as its own, and has stepped up its military activity near the islands, alarming Taipei and Washington amid concerns that Beijing might follow Russia’s example and use force.

While saying it recognizes Ukraine’s sovereignty, Beijing has repeatedly said that Russia has legitimate security concerns that should be addressed and urged a diplomatic solution to the conflict.