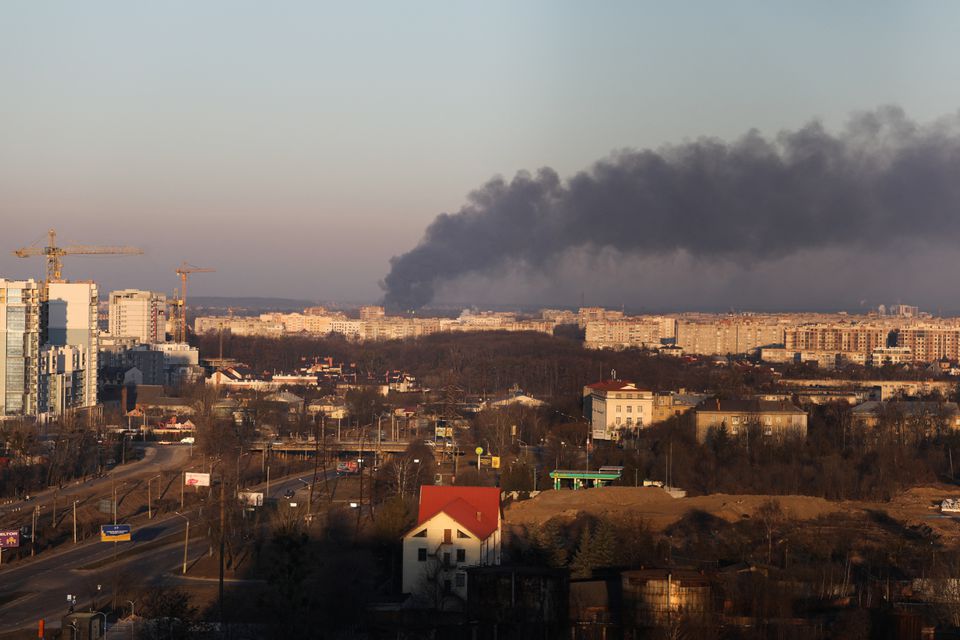 Russia fired missiles at an airport near Lviv on Friday, a city where hundreds of thousands found refuge far from Ukraine’s battlefields, as Moscow tries to regain the initiative in its stalled campaign against Ukraine, Reuters reported.

U.S. President Joe Biden was due to talk with Chinese president Xi Jinping later on Friday, in an attempt to starve Russia’s war machine by isolating Moscow from the one big power that has yet to condemn its assault.

More than three weeks since President Vladimir Putin launched an invasion to subdue what he calls an artificial state undeserving of nationhood, Ukraine’s elected government is still standing and Russian forces have not captured a single big city.

Russian troops have taken heavy losses while blasting residential areas to rubble, sending more than 3 million refugees fleeing. Moscow denies it is targeting civilians in what it calls a “special operation” to disarm its neighbour.

“Ukrainian forces around Kyiv and Mykolaiv continue to frustrate Russian attempts to encircle the cities. The cities of Kharkiv, Chernihiv, Sumy and Mariupol remain encircled and subject to heavy Russian shelling.”

At least three blasts were heard near Lviv’s airport on Friday morning, with videos on social media showing large explosions and mushroom-shaped plumes of smoke rising.

The city, in Western Ukraine near the Polish border, is hundreds of miles from Russia’s advance and has been one of the main destinations for Ukrainians forced to flee battle zones.

Russia has stepped up missile attacks on scattered targets in western Ukraine in recent days in what Ukrainian officials see as a bid to widen the conflict beyond areas where their troops are now bogged down.

Russia has been intensively shelling eastern Ukrainian cities, especially Chernihiv, Sumy, Kharkiv and Mariupol, a southern port under siege for three weeks where residents have been sheltering with no access to food or water.

One of those killed in Chernihiv was Jimmy Hill, 68, an American working in Ukraine as a university lecturer, trapped in the besieged city looking after his Ukrainian partner who was hospitalised with illness. He was gunned down by Russian snipers while waiting in a bread line, and his body was found in the street, his family said.

In his last Facebook post, he wrote that his partner was in intensive care. “Intense bombing! still alive. Limited food. Room very cold.”

Kyiv has so far been spared a major assault, even as long columns of troops bore down from the northwest and east, halted at the gates in heavy fighting that destroyed suburbs. Residents in the capital have endured nightly deadly missile attacks. In the latest, one person was killed when parts of a Russian missile hit a residential building. Mayor Vitaliy Klitschko said 19 people were injured including four children.

In the southeast, where Russian forces have been trying to expand territory held by pro-Russian separatists, Ukraine’s Luhansk regional governor Serhiy Haidai said Russians were dug in around the city of Rubizhne and heavily shelling with casualties as yet unknown.

Putin and Xi signed a “no limits” friendship pact three weeks before the invasion in an ostentatious event held on the morning of last month’s Winter Olympics opening ceremony in Beijing. The document repeated some of Russia’s grievances over Ukraine.

China has so far been treading a careful line in public, abstaining in votes over U.N. resolutions condemning Russia, while declining to refer to the assault as an invasion and repeating criticism of the West.

But Washington, which this week announced $800 million in new military aid to Kyiv, now says Moscow wants more from Beijing than just diplomatic cover, and has asked for money and weapons to keep the war going, which Moscow and Beijing deny.

The United States is concerned China is “considering directly assisting Russia with military equipment to use in Ukraine,” Secretary of State Antony Blinken said.

Biden, who described Putin as a “murderous dictator”, will make clear to Xi in his call that China “will bear responsibility for any actions it takes to support Russia’s aggression”, Blinken told reporters. The two leaders are due to speak at 1300 GMT.

“Beijing will do everything in its power to avoid having to openly take sides, but its formerly relatively cost-free relationship with Russia has become complicated and is now exposing China to growing geopolitical, economic and reputational risks,” said Helena Legarda, Lead Analyst at the Mercator Institute for China Studies.

Hours before the phone call, China sailed an aircraft carrier through the sensitive Taiwan Strait – shadowed by a U.S. destroyer – a person with direct knowledge of the matter said.