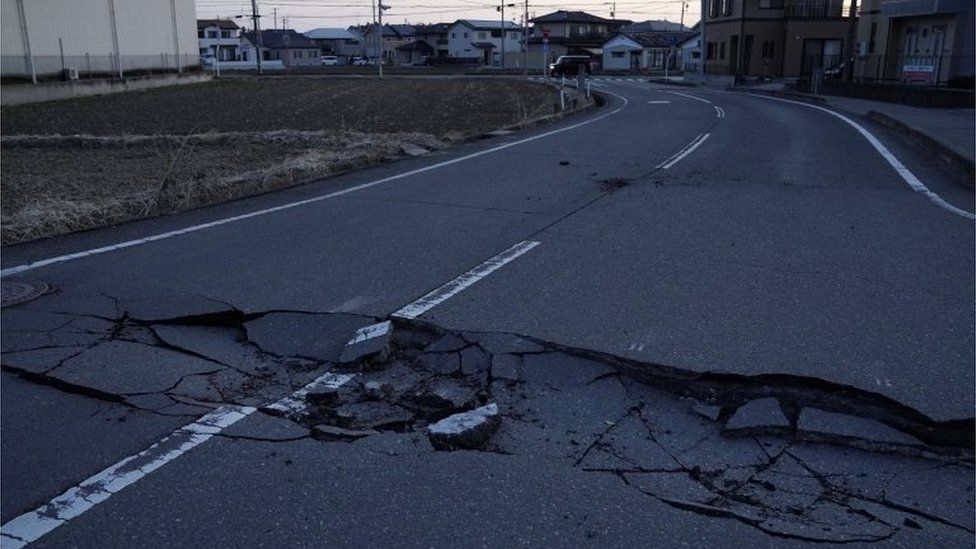 Two million homes initially lost power and a bullet train was derailed, but none of its passengers were hurt.

The magnitude 7.4 quake was in the same area as the one which caused the 2011 Fukushima nuclear disaster but it was not damaged this time, officials said.

In some areas the earthquake was too forceful for people to stand, and buildings rattled in the capital Tokyo.

They warned of possible aftershocks in Fukushima, Miyagi and Yamagata prefectures.

Immediately after the event, Japan’s meteorological agency issued an advisory for tsunami waves of one metre (3.3ft) for parts of the north-east coast, but it was withdrawn on Thursday morning after waves one-third of that height reached shore.

A number of people across north-eastern Japan were hurt by falling objects or in falls, and in the city of Soma, Fukushima Prefecture, local media reported that one man in his sixties had died. A second death was reported in Miyagi Prefecture.

Some media reports said four people died in the quake, but government spokesman Hirokazu Matsuno said the number of fatalities directly caused by it was still being confirmed.

Electricity to more than 2.2 million homes was temporarily cut in 14 prefectures, including the Tokyo region, but by mid-morning power had been restored to most places, the local electricity provider said.

There was a lucky escape for those on board a bullet train that was derailed by the quake north of Fukushima city – fortunately it was not going fast and no-one was hurt.

Passengers and staff were trapped for four hours on board before being able to escape.

Japan’s Prime Minister Fumio Kishida told reporters earlier the government was still trying to assess the extent of any damage, and authorities said emergency services had been inundated with calls.

Buildings in Tokyo shook for more than two minutes. Further north in Fukushima the shaking was much more powerful.

In Ishinomaki in Miyagi Prefecture, a city official told AFP news agency he had been woken up by “extremely violent shaking”.

“I heard the ground rumbling. Rather than feeling scared, I immediately remembered the Great East Japan earthquake,” he said, referring to the 2011 disaster.

Thursday’s earthquake happened almost 60km off the coast of Fukushima, not far from the epicentre of the most powerful earthquake in Japan’s history, which killed 18,000 people when it struck 11 years ago.

The 2011 earthquake triggered a tsunami and destroyed the Fukushima nuclear plant, sparking a major disaster after radiation leaked from the plant.

Nuclear authorities said that no abnormalities had been detected after Wednesday night’s earthquake at the damaged Fukushima site.