U.S. steps up pressure on Russia over Ukraine invasion 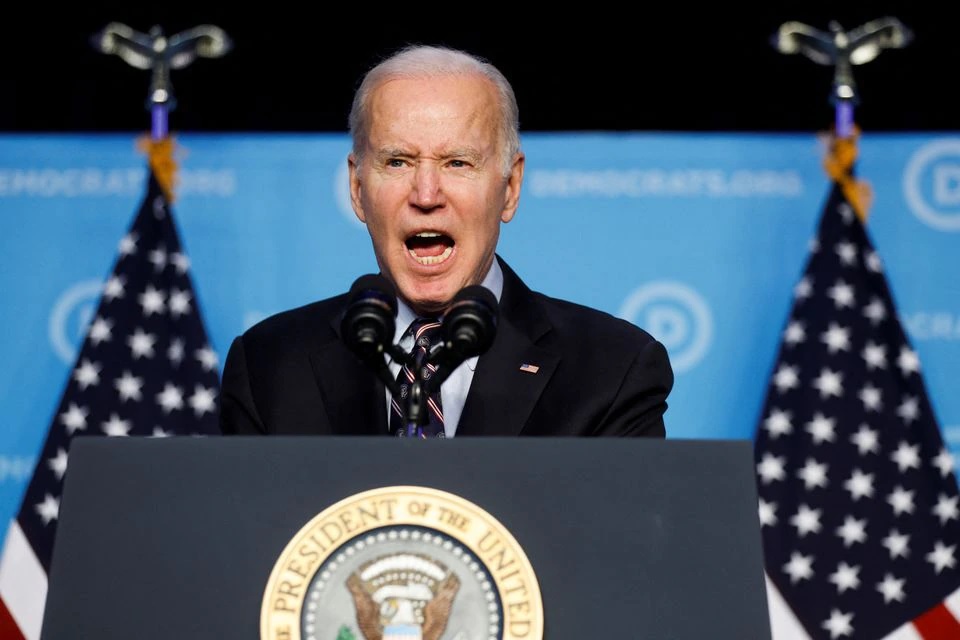 U.S. President Joe Biden on Friday will call for an end of normal trade relations with Russia and clear the way for increased tariffs on Russian imports as punishment for its invasion of Ukraine, a source said, Reuters reported.

Washington’s moves to tighten the screws on Moscow come as U.S. and European officials accuse Russia of war crimes over its bombardment of civilians in Ukrainian cities, amid repeated violations of ceasefires which each side blames on the other.

Satellite images showed a Russian military column threatening Kyiv from the north had dispersed to new positions, private U.S. company Maxar Technologies (MAXR.N) said, possibly in preparation for an assault on the capital.

Removing Russia’s status of “Permanent Normal Trade Relations” with the United States will require an act of Congress, one senior administration official said. Lawmakers in both houses of Congress have expressed support.

The move would be another escalation in the push by the United States and its allies to pressure Russian President Vladimir Putin to end the largest conflict in Europe since World War Two.

Russia calls its actions in Ukraine a “special operation” to disarm Ukraine and unseat leaders it calls neo-Nazis. Ukraine and Western allies call this a baseless pretext for a war of choice that has raised fears of wider conflict in Europe.

Images provided by Maxar show armoured units manoeuvring in and through towns close to Antonov airport northwest of Kyiv, while other elements further north had repositioned near Lubyanka with towed artillery howitzers in firing positions.

Reuters was unable to independently verify the images but the Ukrainian armed forces’ general staff said late on Thursday Russian forces had regrouped after heavy losses, without specifying which elements they were referring to.

The U.S. Senate on Thursday voted to approve legislation providing $13.6 billion to help Ukraine in its fight against Russia.

“We’re keeping our promises to support Ukraine as they fight for their lives against the evil Vladimir Putin,” Senate Majority Leader Chuck Schumer said. The aid for Ukraine is designed to finance ammunition and other military supplies, as well as humanitarian support.

After three weeks of war Russia has failed to reach its stated objectives of disarming the Ukrainian military and ousting the democratically elected government, but it has caused thousands of deaths and forced more than 2 million people to flee the country, where several cities are under siege.

Putin, facing global condemnation and increasingly isolated, said on Thursday Russia would emerge stronger after what he calls the special military operation.

“There are some questions, problems and difficulties but in the past we have overcome them and we will overcome them,” he said.

Russian Foreign Minister Sergei Lavrov said the operation was going to plan after holding talks with his Ukrainian counterpart, Dmytro Kuleba, in Turkey on Thursday, the highest-level meeting since Putin ordered the invasion on Feb. 24.

Kuleba said afterwards that Lavrov had refused to promise to hold fire to allow aid distribution and the evacuation along humanitarian corridors of civilians trapped in the besieged southern port city of Mariupol and elsewhere.

Lavrov repeated Moscow’s accusations that Ukraine posed a threat to Russia, which wants Kyiv to drop any aspirations of joining the NATO military alliance.

Russia’s defence ministry said it would declare a ceasefire on Friday and open humanitarian corridors from Mariupol as well as Kyiv, Sumy, Kharkiv, Mariupol and Chernihiv, although previous ceasefires have broken down with both sides blaming the other.

Officials in Mariupol said Russian warplanes again bombed the city on Thursday, a day after a maternity hospital was pulverised in an attack the United States said was evidence of a war crime.

Linda Thomas-Greenfield, the U.S. ambassador to the United Nations, said Washington was “working with others in the international community to document the crimes that Russia is committing against the Ukrainian people”.

“They constitute war crimes; there are attacks on civilians that cannot be justified by any – in any way whatsoever,” said in an interview with the BBC.

Lavrov said the hospital struck on Wednesday had stopped treating patients and had been occupied by Ukrainian “radicals”. Russia’s Defence Ministry later denied having bombed the hospital at all, accusing Ukraine of a “staged provocation”.

“This is outright terror … from experienced terrorists,” he said in a televised address.

The war in Ukraine and massive sanctions against Russia have triggered a contraction in global trade and sent food and energy prices sharply higher, dealing a blow to global growth, International Monetary Fund Managing Director Kristalina Georgieva said on Thursday.

The sanctions had already triggered an abrupt, significant contraction of the Russian economy and it faced a “deep recession” this year, she told reporters.

The resulting massive depreciation of the rouble was driving inflation higher and denting the standard of living for “a vast majority of the Russian population”.

At a summit in France, European Union leaders on Thursday differed over the reach of sanctions against Moscow and refused Kyiv’s appeal for rapid accession to the bloc.

Some EU leaders pushed for tougher sanctions that would hit Russia’s oil and gas industries even if that meant repercussions for those European nations reliant on Russian fossil fuels.

“The war in Ukraine is an immense trauma … But it is also most definitely something which is going to lead us to completely redefine the structure of Europe,” French President Emmanuel Macron said.