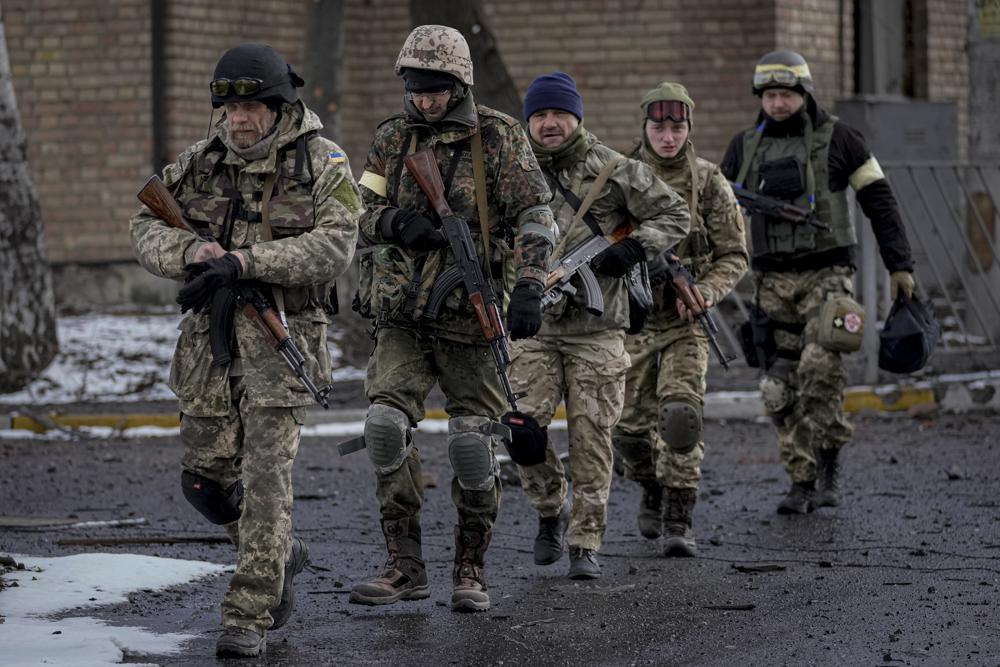 Kyiv residents awoke Wednesday to an air raid alert urging them to get to bomb shelters as quickly as possible over fears of incoming Russian missiles, while the strategic port city of Mariupol remained encircled as a humanitarian crisis grew, Associated Press reported.

Kyiv regional administration head Oleksiy Kuleba issued the air raid alert saying there was a “threat of a missile attack” on the Ukrainian capital. “Everyone immediately to shelters,” he said, later lifting the alert as the all-clear was given.

For days, as Moscow’s forces have laid siege to Ukrainian cities, the fighting has thwarted attempts to create corridors to safely evacuate civilians.

Air raid alerts are common, though irregular, keeping people on edge. Kyiv has been relatively quiet in recent days, though Russian artillery has pounded the outskirts.

Kuleba said the crisis for civilians was growing in the capital, with the situation particularly critical in the city’s suburbs.

“Russia is artificially creating a humanitarian crisis in the Kyiv region, frustrating the evacuation of people and continuing shelling and bombing small communities,” he said.

Across the country, thousands of people are thought to have been killed, both civilians and soldiers, in nearly two weeks of fighting. Russian forces have seen their advances stopped in certain areas — including around Kyiv — by fiercer resistance than expected from the Ukrainians.

But Russian troops have advanced deep along Ukraine’s coastline in what could establish a land bridge to Crimea, which Moscow seized from Ukraine in 2014.

The city of Mariupol has been surrounded by Russian soldiers for days and a humanitarian crisis is unfolding in the encircled city of 430,000.

Corpses lie in the streets of the city, which sits on the Asov Sea. Hungry people break into stores in search of food and melt snow for water. Thousands huddle in basements, trembling at the sound of Russian shells pounding this strategic port city.

“Why shouldn’t I cry?” Goma Janna demanded as she wept by the light of an oil lamp below ground, surrounded by women and children. “I want my home, I want my job. I’m so sad about people and about the city, the children.”

Tuesday brought no relief: An attempt to evacuate civilians and deliver badly needed food, water and medicine through a designated safe corridor failed, with Ukrainian officials saying Russian forces had fired on the convoy before it reached the city.

In other developments in the Russian invasion:

— Poland offered to give all of its MiG-29 fighter jets to the U.S., apparently agreeing to an arrangement that would allow them to be used by Ukraine’s military. But Pentagon press secretary John Kirby later said the plan is not “tenable” and raises serious concerns for the NATO alliance. He said the U.S. would discuss it further with Poland.

— Russia’s economic isolation deepened as U.S. President Joe Biden announced a ban on Russian oil imports and Shell said it will no longer buy oil and natural gas from the country. Also, Adidas and McDonald’s said they are suspending their operations in Russia.

For days, as Moscow’s forces have laid siege to Ukrainian cities, attempts to create corridors to safely evacuate civilians have stumbled amid continuing fighting and objections to the proposed routes. Ukraine has rejected Moscow’s offers of corridors that lead civilians to Russia or its ally Belarus.

The Russian military has denied firing on convoys and charged that the Ukrainian side is blocking evacuation efforts.

One evacuation did appear successful Tuesday, with Vereshchuk saying that 5,000 civilians, including 1,700 foreign students, had been brought out via a safe corridor from Sumy, an embattled northeastern city of a quarter-million people where overnight strikes killed 21, including two children.

Natalia Mudrenko, the highest-ranking woman at Ukraine’s U.N. Mission, told the Security Council that the people of Mariupol have “been effectively taken hostage,” by the siege. Her voice shook with emotion as she described how a 6-year-old died shortly after her mother was killed by Russian shelling. “She was alone in the last moments of her life,” she said.

Authorities in Mariupol planned to start digging mass graves for all the dead. The shelling has shattered buildings, and the city has no water, heat, working sewage systems or phone service.

Theft has become widespread for food, clothes, even furniture, with locals referring to the practice as “getting a discount.” Some residents are reduced to scooping water from streams.

With the electricity out, many people are relying on their car radios for information, picking up news from stations broadcast from areas controlled by Russian forces or Russian-backed separatists.

Ludmila Amelkina, who was walking along an alley strewn with rubble and walls pocked by gunfire, said the destruction had been devastating.