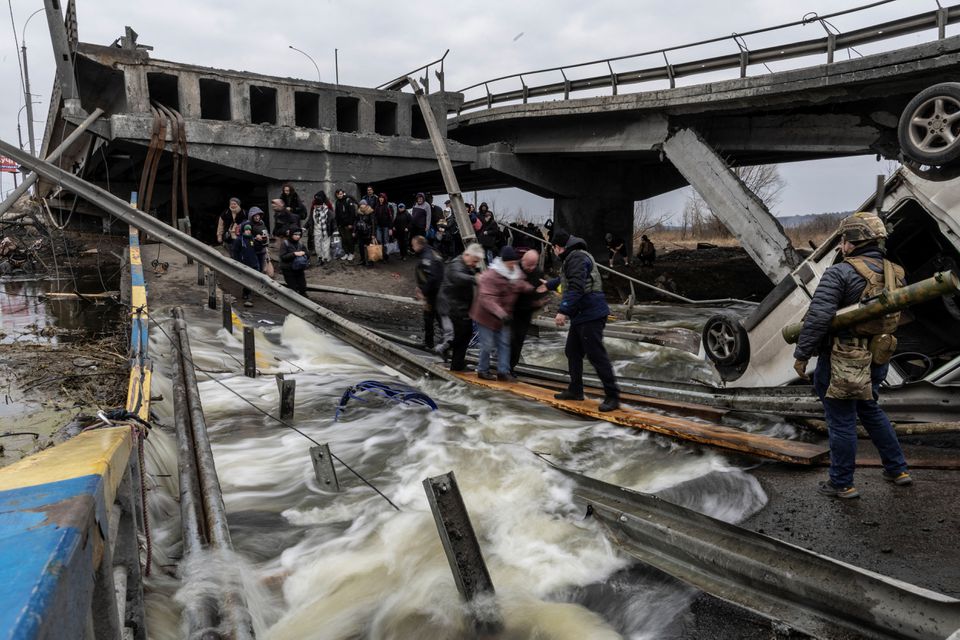 Russia announced new “humanitarian corridors” on Monday to transport Ukrainians trapped under its bombardment – to Russia itself and its ally Belarus, a move immediately denounced by Kyiv as an immoral stunt, Reuters reported.

The announcement came after two days of failed ceasefires to let civilians flee the besieged city of Mariupol, where hundreds of thousands of people are trapped without food and water, under relentless bombardment and unable to evacuate their wounded.

The new “corridors” would be opened at 10 a.m. Moscow time (0700 GMT) from the capital Kyiv and the eastern cities of Kharkiv and Sumy, as well as Mariupol, Russia’s defence ministry said.

According to maps published by the RIA news agency, the corridor from Kyiv would lead to Belarus, while civilians from Kharkiv would be permitted to go only to Russia. Russia would also mount an airlift to take Ukrainians from Kyiv to Russia, the ministry said.

“Attempts by the Ukrainian side to deceive Russia and the whole civilised world … are useless this time,” the ministry said.

A spokesperson for Ukrainian President Volodymyr Zelenskiy called the move “completely immoral” and said Russia was trying to “use people’s suffering to create a television picture”.

“They are citizens of Ukraine, they should have the right to evacuate to the territory of Ukraine,” the spokesperson told Reuters.

“This is one of the problems that is causing the humanitarian corridors to break down. They seem to agree to them, but they themselves want to supply humanitarian aid for a picture on TV, and want the corridors to lead in their direction.”

Russia’s invasion has been condemned around the world, sent more than 1.5 million Ukrainians fleeing abroad, and triggered sweeping sanctions that have isolated Russia to a degree never before experienced by such a large economy.

Russia denies deliberately targeting civilians. It calls the campaign it launched on Feb. 24 a “special military operation” to disarm Ukraine and remove leaders it calls neo-Nazis. Ukraine and its Western allies call this a transparent pretext for an invasion to conquer a nation of 44 million people.

Oil prices soared to their highest levels since 2008 in Asian trade after the Biden administration said it was exploring banning imports of Russian oil. Russia provides 7% of global supply and a even though the United States is not a major consumer of Russian crude such a ban would ripple through world markets.

Europe relies on Russia for crude oil and natural gas but has become more open to the idea of banning Russian products, a source familiar with the discussions told Reuters.

The general staff of Ukraine’s armed forces said Russian forces were “beginning to accumulate resources for the storming of Kyiv”, a city of more than 3 million, after days of slow progress in their main advance south from Belarus

‘NO PEACEFUL PLACE ON THIS EARTH’

International attention has focused on Irpin, a Kyiv suburb where residents have been scrambling across a river to flee Russian bombardment. In a speech to the nation late on Sunday, President Volodymyr Zelenskiy described one family cut down there as they tried to escape.

Russians responsible for such atrocities would never be forgiven, he said: “For you there will be no peaceful place on this earth, except for the grave.”

The United Nations called for safe passage to reach people cut off from lifesaving aid across Ukraine. In a humanitarian update it described one psychiatric hospital 60 km from Kyiv, running out of water and medicine with 670 people trapped inside, including bedridden patients with severe needs.

While Russia’s advance in the north on Kyiv has been stalled for days with an armoured column stretching for miles along a highway, it has made more progress in the south, pushing east and west along the Black and Azov Sea coasts.

In Mariupol, residents still trapped are sleeping underground to escape more than six days of shelling by Russian forces that has cut off food, water, power and heating.

About half of the people in the city were due to be evacuated on Sunday, but that effort was aborted for a second day when a ceasefire plan collapsed as the sides accused each other of failing to stop shooting and shelling.

Ukrainian authorities said on Monday the southern city of Mykolayiv was being shelled. Zelenskiy has warned that Russia’s next big target could be Odessa, an historic Black Sea port of 1 million people.

Nearby Kherson is so far the only major city that Russians have captured. Ukraine said it had destroyed 30 Russian helicopters at an airfield there overnight. This could not be confirmed.

The official U.N. civilian death toll from hostilities across Ukraine is 364, including more than 20 children, though officials acknowledge this probably represents a fraction of the true toll.

Russia has acknowledged nearly 500 deaths among its soldiers. Ukraine says the true toll is many thousands. Death tolls cannot be verified, but footage widely filmed across Ukraine shows burnt-out wreckage of Russian armoured columns and Ukrainian cities reduced to rubble by Russian strikes.

In Russia itself, the authorities have imposed a near total blackout on non-official information. The last significant independent broadcasters of the post-Soviet era were shut last week, and a new law threatens long jail terms for reporting deemed by the authorities to discredit the military. Many foreign news organisations have suspended reporting from Russia.

U.S. Secretary of State Antony Blinken said the United States had seen credible reports of deliberate attacks on civilians and was documenting them to support a potential war crimes investigation.

As anti-war protests took place around the world, Ukraine renewed its appeal to the West to toughen sanctions and also requested more weapons, including Russian-made planes. Western countries have so far rejected Ukrainian requests that they impose a no-fly zone, which NATO leaders say would lead to open conflict with Russia.

“Apparently, it’s a pleasure for our friends to sit in a cozy cafe in Paris, Berlin, New York or Budapest, slowly drinking coffee with a croissant and looking at photographs of Ukrainian cities that are being destroyed at that very moment,” Zelenskiy adviser Mihkhailo Podolyak said in a social media post. “But our cities, dying, are still fighting.”