Indian students in Ukraine in fear as Russian invasion grows 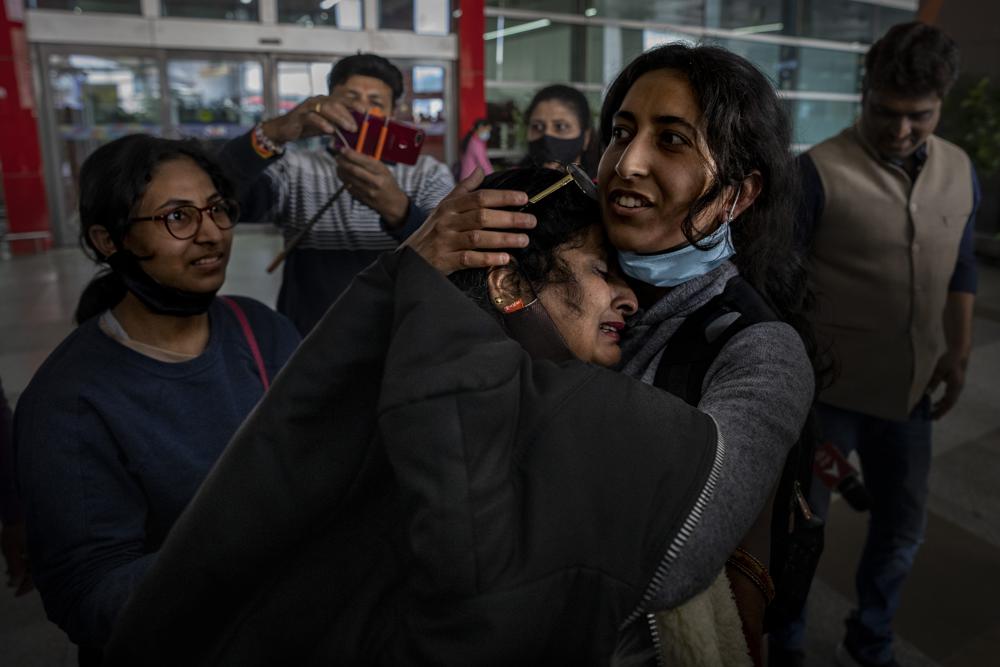 Indian student Abrar Sheikh has been waking up to the loud thuds of bombs that have pummeled Sumy, a city in northeastern Ukraine near the Russian border, for the last three days. When he hears the sounds of shelling, he rushes to a nearby bunker, praying the bombs don’t find him, Associated Press reported.

On Tuesday, the blare of the bombs became louder. The food inside the bunker got scarcer and the cries of children inside grew.

“At that moment, all I could think of was my family,” Sheikh, 22, said by cellphone from the underground bunker on Wednesday, his voice thick with fear.

“Sometimes the bunker goes all silent after we hear the sound of the bombs and I think, ‘Is this it?’” he said. “At night we pull the curtains in our rooms to keep them dark, hoping Russian troops don’t know we are inside.”

Thousands of Indians studying in Ukraine have suddenly found themselves in the midst of the war after Russia invaded the country last week, with many hunkered inside bunkers and fearful of what lies ahead.

Pressure on the Indian government to pull out its citizens has intensified in recent days, especially after one student died in shelling in Kharkiv on Tuesday. The government says about 17,000 out of an estimated 20,000 Indian citizens in Ukraine have left the country and that India is trying to evacuate the rest to nearby countries from where they can be flown back home. Many of those who remain stranded are in conflict areas such as Kharkiv and Sumy.

Sheikh, a medical student at Sumy State University, has been trying to leave the city for several days. But shelling by Russian forces has left him and about 500 other Indian students in the city trapped.

They are about 50 kilometers (30 miles) from the Russian border. But they are hundreds of kilometers and at least 10 hours away from Ukraine’s western border, considered to be safer, where Indian officials have so far focused their evacuation efforts. Evacuation flights have taken off from countries bordering western Ukraine, such as Poland, Slovakia, Hungary and Romania, with more scheduled. A group of Indian Cabinet ministers has flown to these countries to help with rescue efforts.

But for those stuck in the eastern region, there appears no safe way out yet. India has sent a team from its embassy in Moscow to Belgorod, a Russian city close to the border with Ukraine, foreign secretary Harsh Vardhan Shringla said Tuesday. “This team is in place and ready to see whatever we can do to extract our students and citizens from the Kharkiv and Sumy area,” he said.

India has asked all its citizens to immediately leave Kharkiv after receiving information from Russia, External Affairs Ministry spokesman Arindam Bagchi said. They have been advised to move to three safe zones about 15 kilometers (9 miles) away using any means, including on foot, he said. Bagchi did not describe the information provided by Russia.

In Sumy, about 180 kilometers (110 miles) from Kharkiv, an oil depot was reportedly bombed, railway tracks have been destroyed, and there is fighting in the streets, students said.

“We cannot leave. We have no way of getting to the western part. There is no train or bus or any transport to take us there,” said Chandra Reddy, 22, another medical student at Sumy State University.

Reddy said he was in touch with Indian authorities, who urged him to stay put for now.

He said he risked his life on Tuesday to go to a nearby grocery store, leaving the bunker where he has spent most of his time over the last six days. He quickly bought packets of rice, vegetables and fruit — enough to last a few days — before rushing back.

On the same day, Indian student Naveen S. Gyanagoudar was killed in Kharkiv when he left his bunker to go buy food.

“When I heard that, it hit me that I had just done the same thing, that this can be me next,” Reddy said.

Approximately 18,000 Indian students were in Ukraine, most of them studying medicine. The state-run universities are popular with Indian students for their high-quality education at affordable prices, and as an alternative to India’s overcrowded and competitive public universities.

Following the invasion last week, a number of Western and Asian countries slapped sanctions on Russia, but India sought to appear neutral. It has refrained from criticizing Russia or directly acknowledging Ukraine’s sovereignty, instead pushing for diplomacy and dialogue. On Wednesday, it abstained from voting on a U.N. General Assembly resolution demanding an immediate halt to Moscow’s attack on Ukraine – similarly, it abstained from voting on a U.N. Security Council resolution last week. Experts said the decision didn’t signal support for Moscow, but reflected India’s historic partnership with Russia, a Cold War ally it continues to rely on for energy, weapons and support in conflicts with neighbors.

Stranded Indians have appealed for help on social media. In one video, a crying student begged the Indian government for assistance. Another showed dozens of students walking toward crowded borders where they waited for hours before being allowed into neighboring countries.

Such images have sparked sharp criticism of the government’s rescue operation, with some, including opposition political leaders, saying India should have reacted sooner.

India issued an advisory on Feb. 15 telling those who didn’t have essential work in Ukraine to consider leaving temporarily — four days after the United States urged all Americans to leave immediately.

Government officials have rejected the criticism. Many have rushed to New Delhi’s airport in recent days to welcome returning students with flowers.

Nimshim Zimik, who returned to India on Tuesday, said she spent a week in a basement in the Ukrainian city of Vinnytsia, ready with her luggage and essential documents. At night, she and her friends took turns sleeping.

“But we could never really sleep knowing that a bomb could fall anytime on us,” she said.

On Saturday, with no signs of help arriving, Zimik decided to leave the city.

She and 53 other students contacted a Ukrainian driver and left early in the morning. But the bus broke down midway, forcing them to walk almost 10 kilometers (6 miles) to the Romanian border.

She was finally evacuated in a special flight from Romania on Tuesday.

“It’s like a dream,” she said. “Arriving here feels like a very heavy load has been lifted off me.”