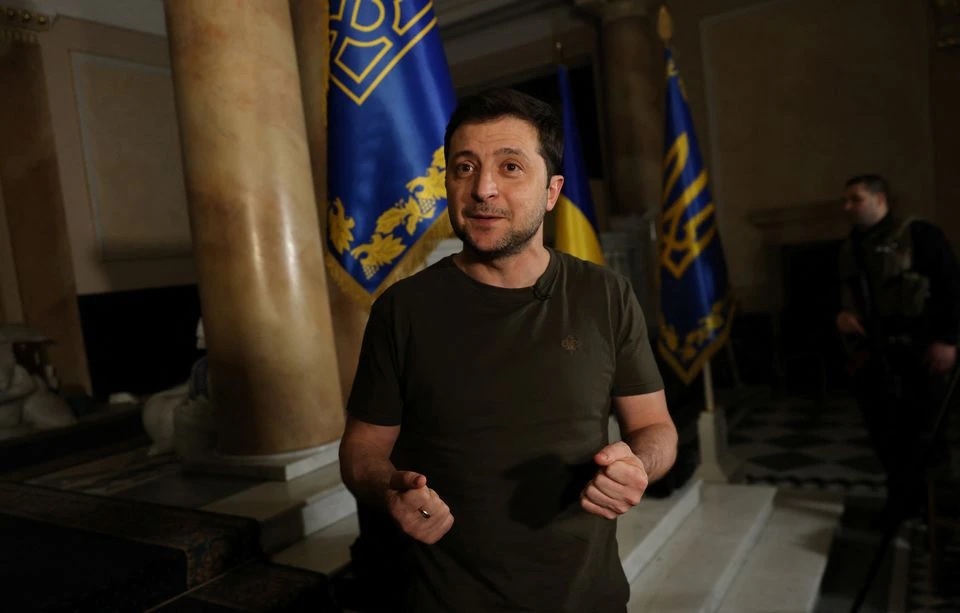 Ukrainian President Volodymyr Zelenskiy said on Tuesday Russia must stop bombing Ukrainian cities before meaningful talks on a ceasefire could start, as a first round of negotiations this week had yielded scant progress, Reuters reported.

Speaking in an interview in a heavily guarded government compound, Zelenskiy urged NATO members to impose a no fly zone to stop the Russian air force, saying this would be a preventative measure and not meant to drag the alliance into war with Russia.

Setting out his conditions for further talks with Russia, Zelenskiy told Reuters and CNN in a joint interview: “It’s necessary to at least stop bombing people, just stop the bombing and then sit down at the negotiating table.”

Just as he was speaking, news emerged that a Russian missile had struck a TV tower near a Holocaust memorial site in the Ukrainian capital, killing at least five people. Earlier on Tuesday, missiles struck the heart of the eastern city of Kharkiv.

IF NOT NATO, THEN GUARANTEES

Ukraine has received weapons shipments from NATO members to help withstand a full-scale military invasion unleashed by Russian forces last week, while the West has also introduced swingeing sanctions on the Russian economy.

But Zelenskiy has urged the international community to do more, including imposing a no fly zone.

“This is not about dragging NATO countries into war. The truth is everyone has long since been dragged into war and definitely not by Ukraine, but by Russia – a large-scale war is going on,” Zelenskiy said.

He said, however, that U.S. President Joe Biden had personally conveyed to him that now was not the time to introduce such a measure.

Ukraine has pressed NATO to accelerate its entry, a move fiercely opposed by Russia and cited as one of Moscow’s reasons for launching its campaign.

“Our partners, if they are not ready to take Ukraine into NATO … because Russia does not want Ukraine to be in NATO, should work out common security guarantees for Ukraine,” Zelenskiy said.

“This means that we have our territorial integrity, that our borders are protected, we have special relations with all our neighbours, we are completely safe, and the guarantors that give us security, they guarantee this legally.”

The 44-year-old president was unshaven and wore a simple khaki T shirt, trousers and combat boots for the interview, which took place in a building heavily guarded by the military.

FIGHT TO THE END

Russia has not made quick early gains or captured major cities in what it calls a special military operation against its neighbour.

While Ukraine has stood alone on the battlefield, it has pressed Europe to recognise that its own security is tied to that of the West.

“It is very important to know that if Ukraine falls, then all these (Russian) troops will be on the borders of your NATO member countries …. and you will be facing the same question there,” Zelenskiy said.

He rued that Europe and the United States had ignored Kyiv’s pleas for pre-emptive sanctions before the war started, but welcomed the impact they were now having on Russia.

Zelenskiy said that Ukraine’s allies had offered financing to prop it up during the war, but urged them to act quickly.

“We have a war every day, we need help every day,” he said. “There is not a lot of time for discussion.”

The president has remained in Kyiv to rally his people against the Russian invasion, now in its sixth day, posting social media videos and constantly reassuring the population that neither he, his family or closest officials have left.

Asked about his daily regime, he replied: “I work and I sleep.” He appeared emotional as he added that he had not seen his children for two days.

Asked how long his country would hold out, Zelenskiy said: “We do not hold out, we fight, and our nation will fight to the end. This is our home, we are protecting out land, our homes. For the sake of our children’s future.”

Children were dying, he said.

“We have something to defend, we are defending our right to live. And what are they (Russians) doing here? They don’t understand our people, our state, our philosophy… They don’t know anything here, they were sent here to kill and to die. Therefore we are stronger on our own land, and we will be stronger.”