UML Chair Oli urges not to play politics on MCC 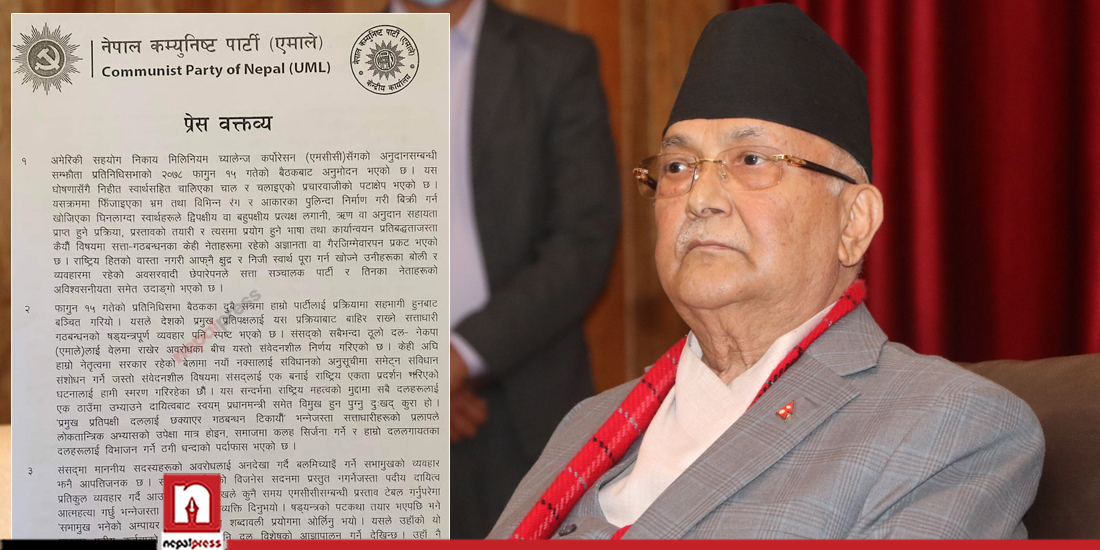 At a press meet organised to disclose the party’s opinion on MCC here today, the UML said much attention had to be paid before signing the foreign assistance agreement but now efforts should be made for its implementation when its compact was endorsed.

On the occasion, UML chair KP Sharma Oli said the MCC should be taken as a development project and urged the concerned side not to do politics creating differences and conflict on the agreement. It was wrong to ascend the cadres to fuel street-based protests, he added.

Main opposition party leader Oli said the government should immediately go for fresh mandate and clarified that fresh discussions between NC and UML were held for safeguarding the Constitution. The former Prime Minister also stressed the need for collaboration between UML and Nepali Congress (NC) which have been fighting for democracy since long.

He accused the efforts of cornering UML by not creating an environment conducive to participate in parliamentary process while endorsing MCC.

Chairperson Oli commented that the interpretive declaration of the MCC presented in the House of Representatives (HoR) was merely a manifestation of deception. He further shared it was baseless to state that the MCC compact was part of the Indo Pacific Strategy (IPS).

“The US has been clarifying that it was not part of the IPS. Now the ruling coalition also echoed the same. The interpretive declaration also noted the same rhetoric. Then why erstwhile Minster Pradeep Gyawali was accused of making MCC as part of IPS,” he questioned.