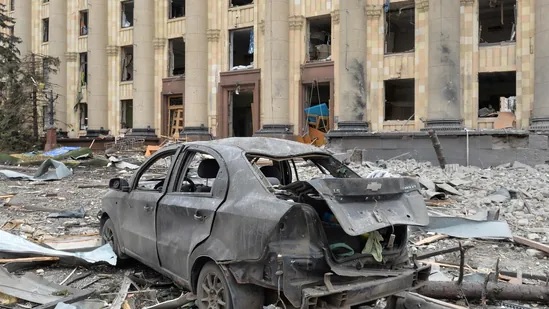 An Indian student was killed on Tuesday in the eastern Ukrainian city of Kharkiv, the country’s second-largest city that is being pounded by heavy shelling by Russian forces, Hindustan Times reported.

The Ministry of External Affairs (MEA) said it was in touch with the student’s family. “With profound sorrow we confirm that an Indian student lost his life in shelling in Kharkiv this morning. The Ministry is in touch with his family. We convey our deepest condolences to the family,” MEA spokesperson Arindam Bagchi said.

Bagchi further said foreign secretary Harsh Vardhan Shringla is calling in ambassadors of Russia and Ukraine to reiterate India’s demand for urgent safe passage for its nationals who are still in Kharkiv and cities in other conflict zones. “Similar action is also being undertaken by our Ambassadors in Russia and Ukraine,” he added in the tweet.

News of the student’s death came within hour of the Indian embassy in Ukraine asking its citizens to urgently leave capital Kyiv. “Advisory to Indians in Kyiv- All Indian nationals including students are advised to leave Kyiv urgently today. Preferably by available trains or through any other means available (sic),” a statement from the embassy read.

The Indian government has undertaken a massive mission to bring back its stranded citizens from war-torn Ukraine via neighbouring countries and has sent its senior ministers to assist the evacuation process. Prime Minister Narendra Modi has urged the Indian Air Force to join the evacuation efforts under Operation Ganga, even as as special flights of Air India are being run to bring back the citizens.

The Ukrainian presidential advisor said Russian troops are trying to lay siege to the capital Kyiv and Kharkiv. There were reports of a 40-mile convoy of tanks and other vehicles threatening the capital — tactics Ukraine’s embattled president Volodymyr Zelenskyy said were designed to force him into concessions in Europe’s largest ground war in generations.

Kharkiv, near the Russian border, saw frequent explosions in one of its residential areas, according to a report by AP.

Images posted online showed the building’s facade and interior badly damaged by a powerful explosion that also blew up part of its roof. The state emergency agency said the attack wounded six people, including a child.

Sinehubov said at least 11 people were killed and scores of others were wounded during Monday’s shelling of the city.

The Russian military has denied targeting residential areas despite abundant evidence documented by AP reporters around Ukraine of shelling of homes, schools and hospitals.