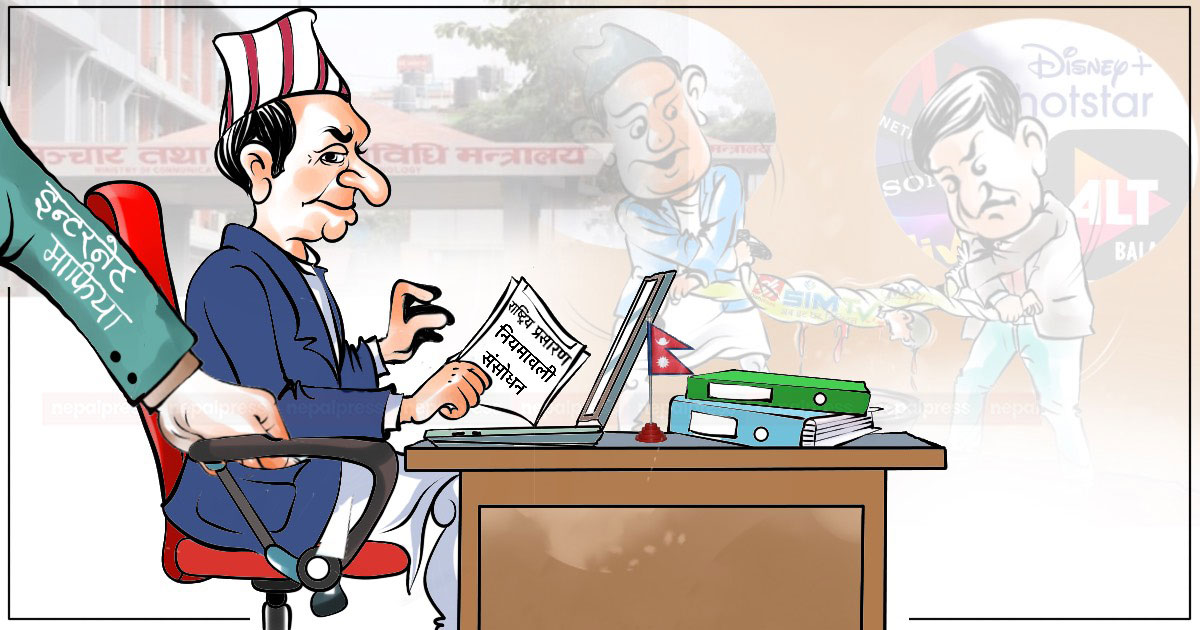 KATHMANDU: The government has secretly amended the National Broadcasting Act without consulting stakeholders. Addressing the OTT / VOD for the first time in the state law, the amendment seems to give more incentives to the tax evaders.

Stakeholders have been raising voices for a long time about the illegal distribution of video content by foreign OTT apps in Nepal. For the first time, the Ministry of Communications and Information Technology has inserted the word OTT / VOD in the policy to silence the same voice.  However, it is not defined.

The amendment made in Rule 2 of the National Broadcasting Rules 2052 is as follows:

The words “transmission system” in clause (c) of Rule 2 of the National Broadcasting Rules 2052 are followed by the words “Online Television and OTT (Over the Top)” or “VAD” (Video on Demand).

Foreign OTT platforms like Netflix, Amazon, Sony Live, Bhut, Alt Balaji are in operation in Nepal.  The revised rules on how to regulate such Otile apps are silent.  For the first time, the Nepal Press had exposed the fact that more than Rs 7 billion is going abroad annually without paying any tax from Nepal through such OTT.  It is not possible to collect tax from such OTT apps without registering them in Nepal.  Experts say that their regulation would not be possible just by inserting the word OTT in the regulations without amending the law. 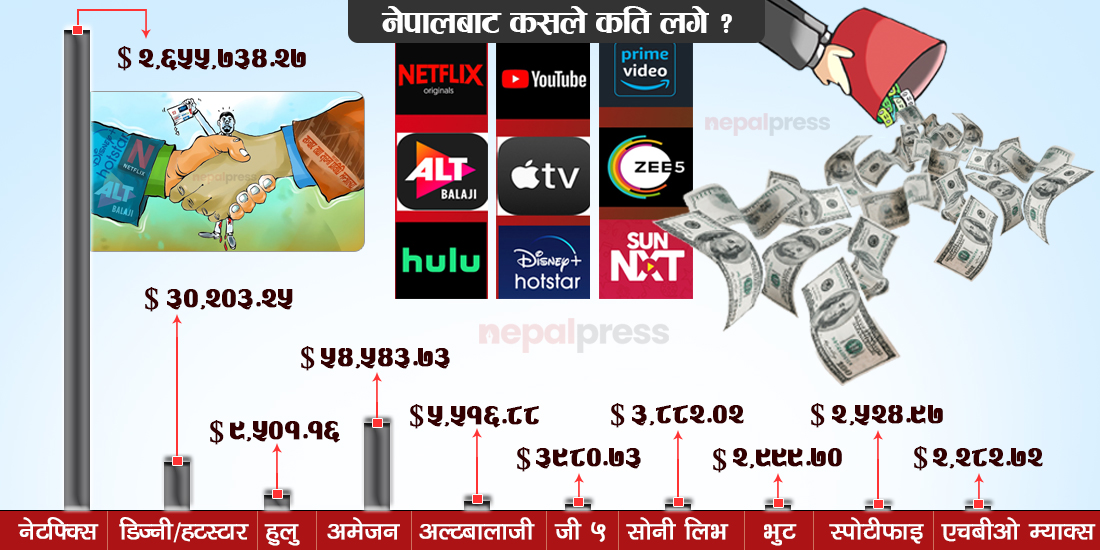 There are many other questions regarding the regulation of OTTs, which have been left unanswered by the regulations.  According to the National Broadcasting Act, downlink permission is required to broadcast any foreign television material in Nepal.  However, foreign OTTs are trading television content in Nepal without such permission.  The amendment of the rules has not solved this issue.  The regulations have also remained silent on the issue of paying the license fee with the permission of MSO and other broadcasters.

The government has been implementing clean feed policy in Nepal’s televisions for a year now.  Accordingly, no foreign television channels are allowed to broadcast in Nepal with advertisements.  However, while the television program was being aired through OTT, it was not even touched by Cleanfeed.  This issue has also been ignored in the amendment of regulations.

Equally sensitive is censorship.  Foreign audio-visual materials are reaching homes in Nepal through uncensored OTT.  There is no provision for censoring such content.  As a result, anti-nationalism, spreading communal hatred, and obscene material are being broadcast uninterruptedly in Nepal.  The amended rules are silent on this issue as well.

While OTT’s business is running smoothly, it has hit various businesses in Nepal.  Television and cable operators who are doing business by paying regular taxes have been hit and the film sector of the country is not untouched by this.

The situation in the Nepali film industry was already fragile.  On top of that, the sector has become even more affected as foreign films have started flowing smoothly through OTT.  Platforms like Netflix have been offering foreign movies to Nepali viewers on television and mobile for a fee.  However, the government does not receive a single rupee of revenue when it collects such fees.

Nepal has different laws for screening films.  According to Madhusudan Pradhan, president of the Film Association of Film Exhibitors, any Nepali film running in Nepal has to pay 13 percent VAT and 5 percent entertainment tax to the local government.  Similarly, 33 percent tax has to be paid while showing foreign films.

Pradhan said, “We are paying tens of millions of rupees to the government.  Depending on how long the movie lasts, the revenue will increase.  It is not possible to say that the government will raise the same amount of tax as the area is in shambles due to Corona.

Aakash Adhikari, president of the Film Producers Association, said that 110 films were made in 2075 BS before the arrival of Corona.  He said, “At that time, even at the rate of around Rs 10 million to make a film, an investment of Rs 1.10 billion has been made.”  In this regard, the producers ‘association has paid Rs 180 million and the film association has paid about Rs 280 million to the government in one year.’

From the OTT platform, the film has been trading without paying any tax. 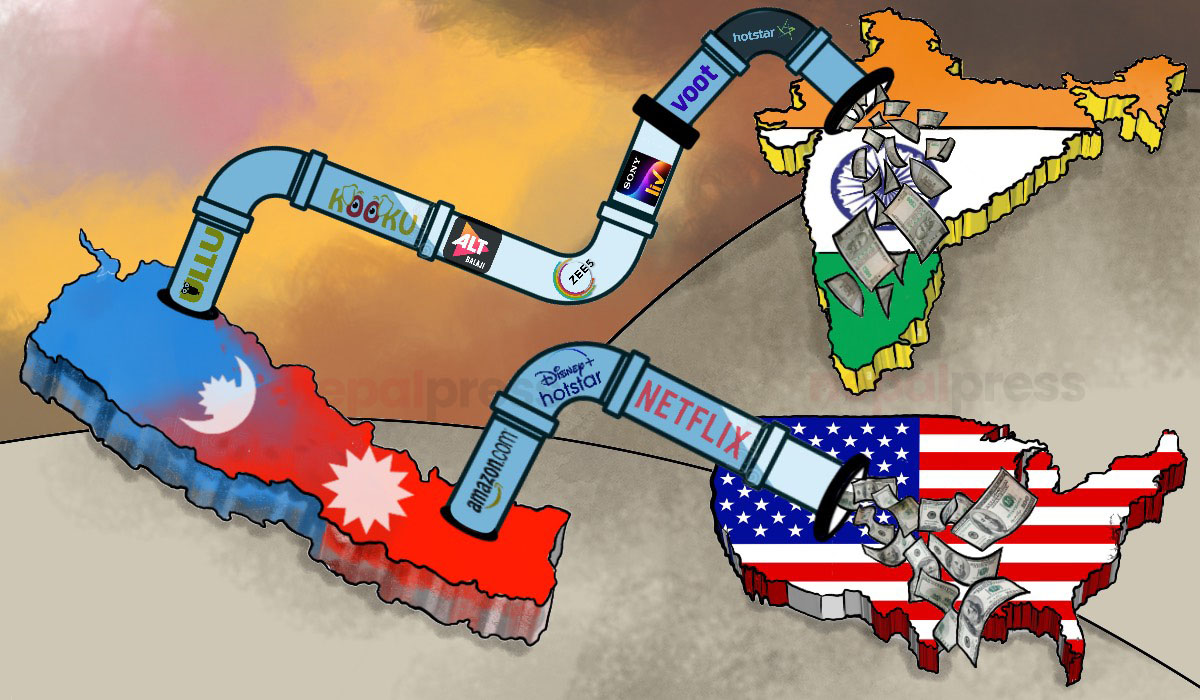 Sub-rule 4 of Rule 11 of the Basic Rules stipulates that the Ministry of Communications should determine the fee to be charged by the organization or person broadcasting the program.  However, due to the government’s lack of interest in the implementation of this provision, tax evasion has been widespread.

As the government has not fixed the fee till now, for years IPTVs have been making a fuss in the eyes of the consumers in the name of free distribution and on the other hand they are cheating the government.