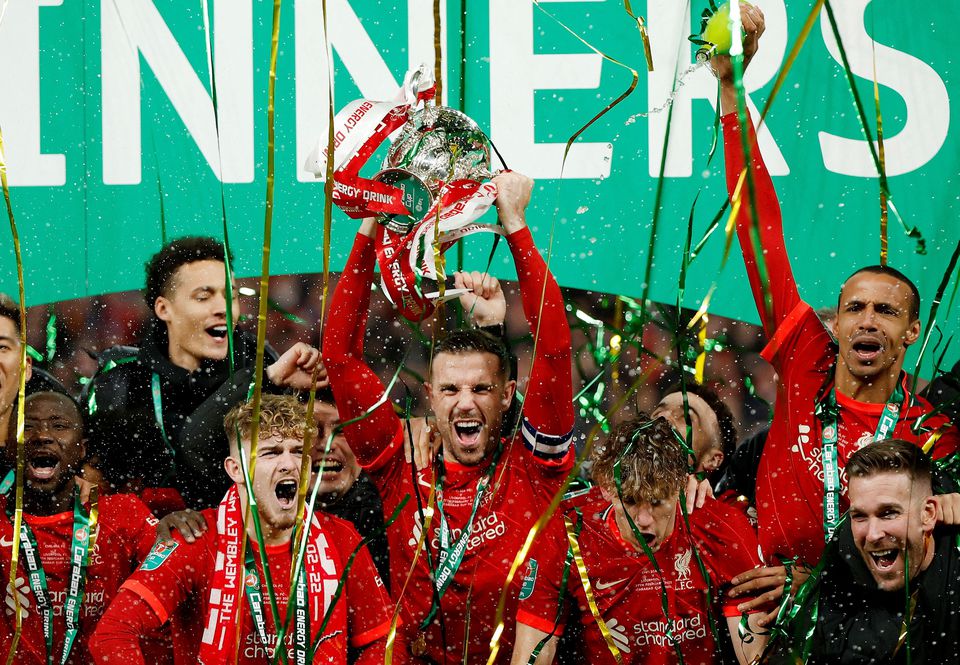 Liverpool held their nerve to win an astonishing penalty shoot-out 11-10 and edge out Chelsea in the English League Cup final on Sunday after a rip-roaring contest had somehow ended 0-0 after extra time at Wembley, Reuters reported.

Both sides could claim to have been deserving winners in a classic free-flowing encounter full of goalscoring chances, remarkable saves and four disallowed goals.

Even in the penalty shoot-out the two heavyweights were inseparable with 21 successful kicks ratcheting up the tension.

In the end it came down to an unlikely duel between two goalkeepers with Liverpool’s young Irish shot-stopper Caoimhin Kelleher belting his penalty past Kepa Arrizabalaga who had replaced Edouard Mendy for the shoot-out.

Spaniard Arrizabalaga then blazed his effort over the bar into the massed ranks of Liverpool supporters who celebrated the club’s first domestic Cup silverware for a decade.

While Liverpool manager Juergen Klopp had won the Premier League and Champions League since arriving at Anfield, it was a rare cup success for the German who had won only two of his previous eight finals with Borussia Dortmund and Liverpool.

For Chelsea manager Thomas Tuchel it meant his hopes of a fourth trophy in just over a year at Stamford Bridge fell just short. He won the Champions League last season and the European SuperCup and FIFA Club World Cup this season.

Klopp’s decision to stay loyal to stand-in keeper Kelleher, who has featured throughout the run to the final, rather than revert to Alisson, was richly rewarded, although the Irishman could hardly have imagined scoring the decisive penalty in a shootout.

“It’s a mad one. When it came down to me I didn’t even think I had scored the winning penalty,” he said. “It was more hit and hope.

“I got close to (stopping) a few but all the penalties were very high quality; thankfully we were able to win.”

Chelsea, bidding to win a sixth League Cup, might well feel aggrieved after having arguably the better chances.

Kelleher was to prove a thorn in their side all afternoon, making one superb reflex save early on after Cesar Azpilicueta’s ball in was met by the unmarked Christian Pulisic.

Chelsea were sharper in the early exchanges but were fortunate in the 17th minute when Sadio Mane got his angles all wrong with a header from Trent Alexander-Arnold’s cross.

Liverpool gradually grew into the game and Chelsea were indebted to a stunning double save by Mendy, first keeping out Naby Keita’s low strike from the edge of the area and then springing across to deflect Mane’s follow-up over the bar.

A relentless first half ended with Chelsea threatening again, with Mason Mount volleying wide from a Kai Havertz cross.

Three minutes after the break Havertz handed Mount an even better chance with a dinked-through pass but this time the England midfielder’s shot rebounded off the inside of the post, leaving Tuchel beating the ground in frustration.

The chances continued to flow, with Mohamed Salah played clean through, but his chip over Mendy lacked weight and Thiago Silva cleared the ball off the line.

Joel Matip thought he had put Liverpool ahead when he nodded in after Mane’s header bounced up but, as the fans let off red flares, the goal was disallowed by referee Stuart Attwell after checking a pitchside monitor.

The cut and thrust continued with Salah again denied by Mendy before Chelsea had a goal chalked off for offside after substitutes Romelu Lukaku and Timo Werner combined to set up Havertz to force a header past Kelleher.

Even in the six minutes of stoppage time both sides were still throwing punches, with Mendy keeping out Virgil van Dijk’s thumping header before Werner squandered a chance.

Chelsea had two goal disallowed in extra time, first when Lukaku cut in from the right and drilled a shot past Kelleher but was adjudged marginally offside.

Then the impressive Havertz fired past Kelleher but again the German’s celebrations were cut short.

Arrizabalaga was sent on by Tuchel at the end of extra time, specifically for his penalty-saving acumen, but instead of being the hero, he handed the trophy to Liverpool.