How can US ‘gift’ to Nepal be delivered by ultimatum, asks Chinese FM 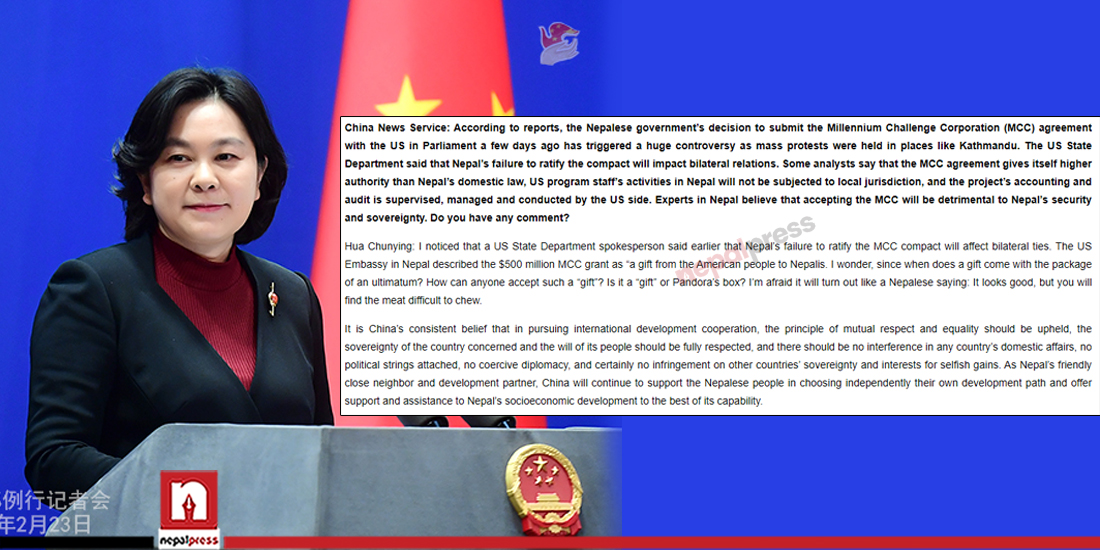 Chinese Foreign Ministry Spokesperson Hua Chunying said China opposes “coercive diplomacy” and will support the Nepalese people to choose their own development path as always, during a press conference on Wednesday, The Global Times reported.

Hua made the remarks responding to the controversy that the US urged Nepal to endorse the Millennium Challenge Corporation (MCC) by February 28, a move that some experts believe will hurt Nepal’s national security and sovereignty if the pact is accepted.

In a statement released on February 9, the US Embassy in Nepal described the $500 million MCC grant as “a gift from the American people and a partnership between the two nations that will bring jobs and infrastructure to Nepal and improve the lives of Nepalis.”

How could a “gift” be sent by an ultimatum? How could people accept such a “gift”? Is it a “gift or a Pandora’s box? Is it afraid that just as the old Nepali saying goes, it looks delicious, but it’s actually a meat tough to chew, Hus said.

China believes that international cooperation should uphold the principles of mutual respect and equality. It should fully respect the state sovereignty and the will of the people without interfering in each other’s internal affairs. It should never attach any political conditions or selfish interests while damaging other countries’ sovereignty and interests, Hua stressed.

According to Nepalese media, US Assistant Secretary Donald Lu held separate telephone conversations with Nepal’s leaders on February 10, during which Lu urged them to endorse the MCC pact by February 28 or Washington would “review its ties with Nepal.”

Nepal and the US signed the MCC agreement in 2017. The US said the deal is designed to improve the availability of electricity and increase road maintenance to advance connectivity, drive growth, and lay a strong foundation for new investment. But Nepal’s Parliament has not ratified the compact.

Nepal’s political parties are sharply divided on whether to accept US’ assistance under the MCC agreement, according to Reuters. Opponents say the agreement would undermine Nepal’s laws and sovereignty as lawmakers would have insufficient oversight of the board directing the infrastructure project.

Hundreds of protesters gathered outside the Parliament building in Kathmandu in opposition to the pact. Experts have pointed out that the effectiveness of the MCC will prevail over the domestic laws of Nepal and doubts have risen as the clause allows the alleged immunity for MCC officials from Nepali laws, and auditing and intellectual property rights.