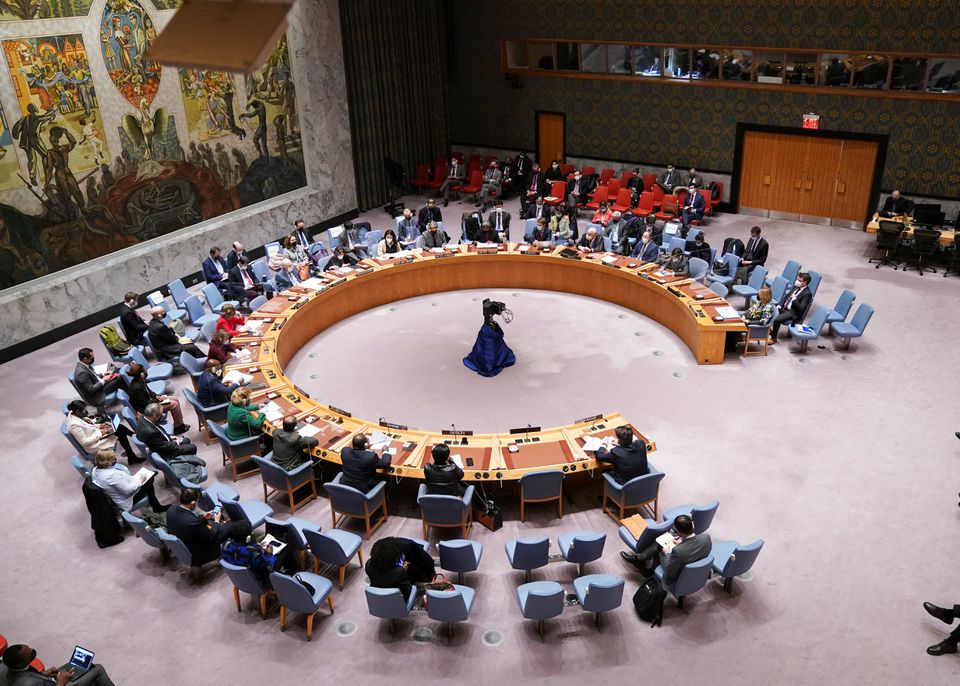 Russia’s parliament approved treaties with two breakaway regions in eastern Ukraine on Tuesday, opening the way for an immediate Russian troop deployment despite the threat of Western sanctions including the blocking of a major new pipeline, Associated Press reported.

German Chancellor Olaf Scholz put the certification of the Nord Stream 2 gas pipeline from Russia to Germany on ice, a measure widely considered the toughest Europe is likely to take against Moscow at this stage.

“We must reassess the situation, in particular regarding Nord Stream 2,” Scholz told a news conference with the Irish leader in Berlin. The pipe, built to bring gas from Russia to Germany via the Baltic Sea, has been completed but has yet to win regulatory approval.

Tensions over a Russian troop build-up near Ukraine’s borders have risen sharply since Putin announced on Monday that he was recognising the independence of the Luhansk and Donetsk regions controlled since 2014 by pro-Russian separatists.

He also signed a decree on the deployment of Russian troops to “keep peace” there.

Russian parliamentary approval of friendship treaties with the two regions, which enter force once Putin signs them, could pave the way for Moscow to build military bases there, adopt a joint defence posture and tighten economic integration.

The Kremlin said it hoped Russia’s recognition would help restore calm and that Moscow remained open to diplomacy with the United States and other countries.

A Kremlin spokesperson said he was unable to say if Russian forces had entered the two regions and that a decision to send in forces would depend on how the situation developed.

Zelenskiy urged Ukraine’s allies not to wait for a further escalation to impose sanctions.

Ukraine said two soldiers had been killed and 12 wounded in shelling by pro-Russian separatists in the east in the past 24 hours, and reported new hostilities on Tuesday morning.

A Reuters journalist saw tanks and other military hardware moving through the separatist-controlled city of Donetsk overnight. No insignia were visible on the vehicles.

Western leaders are trying to work out what Putin will do next, and whether Russia plans a full-scale invasion of Ukraine after being rebuffed over demands for a redrawing of security arrangements in Europe.

“We’ve got to ensure that, whatever happens, Russia will feel the pain … to make sure Russia has absolutely no incentive to go further,” said Ireland’s Europe minister, Thomas Byrne.

Linda Thomas-Greenfield, U.S. ambassador to the United Nations, said the description of the Russian troops as peacekeepers was “nonsense”.

But the West appears likely to hold back on its toughest sanctions for now. A senior U.S. official said the deployment of Russian troops to the breakaway regions did not merit the harshest sanctions the United States and its allies have prepared in the event of a full-scale invasion, as Russia already had troops there.

EU sanctions could including putting hundreds of politicians and officials on black lists, a ban on trading in Russian state bonds and an import and export ban on separatist entities, EU diplomats and officials said.

“Our European, American, British colleagues will not stop and will not calm down until they have exhausted all their possibilities for the so-called punishment of Russia,” he said.

A British minister said the situation was as grave as the 1962 Cuban missile crisis, when a confrontation between the United States and the Soviet Union brought the world to the brink of nuclear war.

China urged all parties to exercise restraint. Japan said it was ready to join international sanctions in the event of a full-scale invasion.

The Russian-backed separatists in Donetsk and Luhansk broke away from Ukrainian government control in 2014 and proclaimed themselves independent “people’s republics” after a pro-Moscow Ukrainian president was ousted in Kyiv.

It was not immediately clear whether Russian troops would stay in territory controlled by the separatists, or seek to capture territory beyond them, a move that would increase the likelihood of conflict. A deputy Russian foreign minister was quoted by Interfax news agency as saying Russia was sticking to the boundaries the separatists control.

Putin has long worked to restore Russia’s influence over nations that emerged after the collapse of the Soviet Union, with Ukraine holding an important place in his ambitions. Russia annexed Crimea from Ukraine in 2014, triggering Western sanctions.