Ukraine president calls for ‘day of unity’ for Feb. 16, day some believe Russia could invade 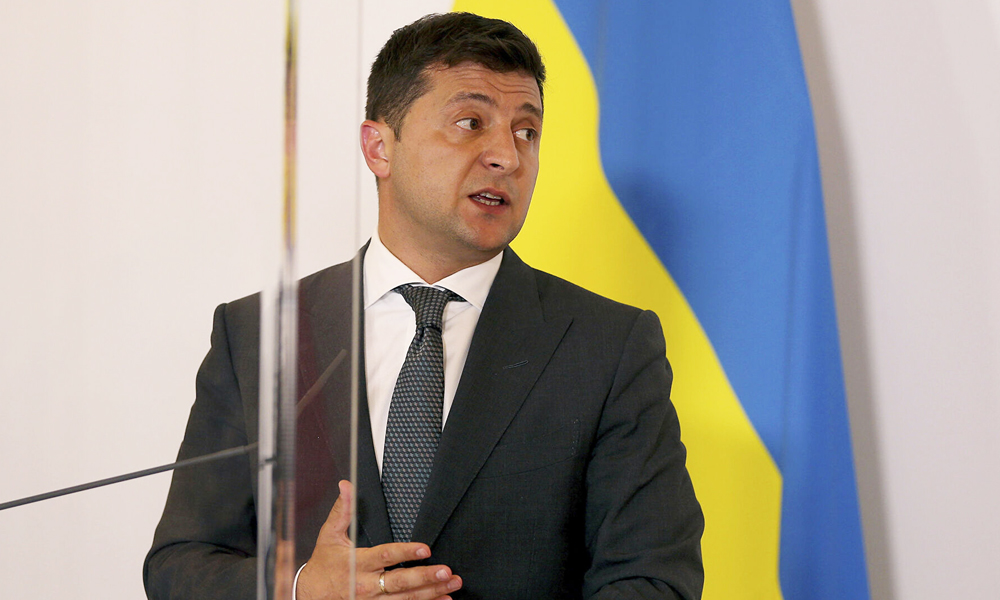 Ukraine President Volodymyr Zelenskiy on Monday called on the country’s people to fly flags and sing the national anthem in unison on Feb. 16, a date that some Western media say Russian could invade, Reuters reported.

Ukrainian government officials stressed that Zelenskiy was not predicting an attack on Wednesday, but responding skeptically to the foreign media reports.

“They tell us Feb. 16 will be the day of the attack. We will make it a day of unity,” Zelenskiy said in a video address to the nation.

“They are trying to frighten us by yet again naming a date for the start of military action,” Zelenskiy said. “On that day, we will hang our national flags, wear yellow and blue banners, and show the whole world our unity.”

Zelenskiy has long said that, while he believes Russia is threatening to attack his country, the likelihood of an imminent invasion has been overstated by Western allies, responding to Moscow’s efforts to intimidate Ukraine and sow panic.

Mykhailo Podolyak, an adviser to Zelenskiy’s chief of staff, told Reuters the president was responding in part “with irony” to media reports of the potential date of the invasion.

Zelenskiy’s office released a decree calling for all villages and towns in Ukraine to fly the country’s flags on Wednesday, and for the entire nation to sing the national anthem at 10 a.m. It also called for an increase in salaries of soldiers and border guards.

U.S. officials said they were not predicting an assault ordered by Russian President Vladimir Putin on a specific day, but repeated warnings that it could come at any time.

“I won’t get into a specific date, I don’t think that would be smart. I would just tell you that it is entirely possible that he could move with little to no warning,” Pentagon spokesperson John Kirby told reporters. Earlier, Kirby said Moscow was still adding to its military capabilities on the Ukrainian frontier.

Secretary of State Antony Blinken said Washington, which has already sent most of its diplomats home, was moving its remaining diplomatic mission in Ukraine from Kyiv to the western city of Lviv, much further from the Russian border. He cited a “dramatic acceleration in the buildup of Russian forces”.

Blinken said Washington was offering Ukraine up to $1 billion in sovereign loan guarantees to calm markets.

The State Department issued a travel advisory recommending that U.S. citizens leave Belarus, which borders both Russia and Ukraine.

Russia has more than 100,000 troops massed near the border of Ukraine. Russian political leaders deny Western accusations that it is planning to invade, but say it could take unspecified “military-technical” action unless a range of demands are met, including barring Kyiv from ever joining the NATO alliance.

Russia suggested on Monday that it would keep talking to the West to try to defuse the security crisis.

In a televised exchange, Putin was shown asking his foreign minister, Sergei Lavrov, whether there was a chance of an agreement to address Russia’s security concerns, or whether it was just being dragged into tortuous negotiations.

Lavrov replied: “We have already warned more than once that we will not allow endless negotiations on questions that demand a solution today.”

But he added: “It seems to me that our possibilities are far from exhausted … At this stage, I would suggest continuing and building them up.”

Western countries have threatened unprecedented sanctions if Russia invades. The Group of Seven large economies (G7) warned on Monday of “economic and financial sanctions which will have massive and immediate consequences on the Russian economy”.

After speaking with the foreign ministers of Russia and Ukraine, U.N. Secretary-General Antonio Guterres said he still believed “from his own analysis, his own hopes” that there would not be a conflict, a U.N. spokesperson said. read more

Moscow says Ukraine’s quest to join NATO poses a threat. While NATO has no immediate plans to admit Ukraine, Western countries say they cannot negotiate over a sovereign country’s right to form alliances.

Ukraine has already suffered economic damage from the standoff. A surge in the price of 5-year credit default swaps on Ukrainian sovereign bonds suggested that markets gave Kyiv a 42% probability of defaulting.

Ukraine International Airlines, the nation’s biggest airline, said its insurers had terminated coverage for some of its aircraft.

Scholz said he saw “no reasonable justification” for Russia’s military activity on Ukraine’s border, and that “we are ready for a serious dialogue with Russia on European security issues”. He announced a credit of 150 million euros ($170 million) for Ukraine.