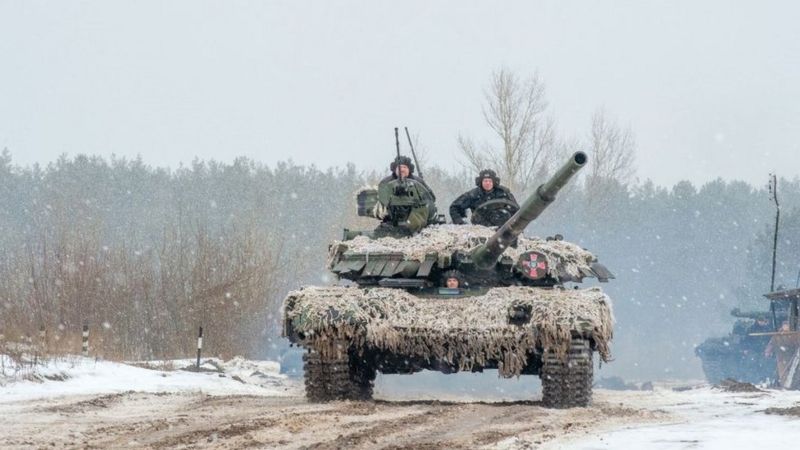 Mr Biden said he would not send troops to rescue Americans if Moscow invades Ukraine.

He warned that “things could go crazy quickly” in the region.

Russia has repeatedly denied any plans to invade Ukraine despite massing more than 100,000 troops at the border.

But it has just begun massive military drills with neighbouring Belarus, and Ukraine has accused Russia of blocking its access to the sea.

The Kremlin says it wants to enforce “red lines” to make sure that its former Soviet neighbour does not join Nato.

UK Prime Minister Boris Johnson said on Thursday that Europe faced its biggest security crisis in decades amid the tensions.

The US State Department urged Americans in Ukraine to leave immediately.

“We’re dealing with one of the largest armies in the world. It’s a very different situation and things could go crazy quickly.”

Asked whether there was a scenario that could prompt him to send troops to rescue fleeing Americans, Mr Biden replied: “There’s not. That’s a world war when Americans and Russia start shooting at one another. We’re in a very different world than we’ve ever been.”

Russia and Ukraine announced late on Thursday that they had failed to reach any breakthrough in a day of talks with French and German officials aimed at ending the separatist conflict in eastern Ukraine.

The current tensions come eight years after Russia annexed Ukraine’s southern Crimea peninsula. Since then, Ukraine’s military has been locked in a war with Russian-backed rebels in eastern areas near Russia’s borders.

Earlier, the UK prime minister said he hoped “strong deterrence” and “patient diplomacy” could find a way through the crisis but the stakes were “very high”.

In a joint news conference in Brussels with Nato secretary-general Jens Stoltenberg, Mr Johnson said he did not believe Russia had yet taken a decision on whether to invade Ukraine but the UK’s intelligence “remains grim”.

Asked whether the UK would consider going further in its support for Ukraine, including military support for an insurgency if Russia invades, Mr Johnson said he would “consider what more we can conceivably offer”.

“It’s possible, I don’t want to rule this out, but at the moment we think the package is the right one,” he said.

Russian Foreign Minister Sergei Lavrov said during a frosty news conference with his British counterpart Liz Truss that the talks had been “disappointing”.

He said relations between the UK and Russia “leave much to be desired” and are at the “lowest point over the past few years”.

Before the trip, Mr Wallace confirmed that the UK was providing more defensive equipment – including body armour, helmets and combat boots – to the Ukrainian government. He also said it was important to show that Nato countries “won’t let threats push us around”.

Meanwhile, Ukraine accused Russia of blocking its access to the sea as Russia prepares for naval exercises.

Russia’s naval exercises will take place next week in the two seas to the south of Ukraine, the Black Sea and the Sea of Azov. Russia has issued coastal warnings citing missile and gunnery firing exercises.

Ukraine’s foreign ministry said the “unprecedentedly vast area where the manoeuvres will be conducted makes navigation in both seas practically impossible”, and Defence Minister Oleksiy Reznikov tweeted that the international waters of the two seas had been blocked by Russia.

The naval exercises off Ukraine’s southern flank are in addition to the 10 days of military exercises currently under way in Belarus, to the north of Ukraine.

There are fears that if Russia tries to invade Ukraine, the exercises put the Russian military close to the Ukrainian capital, Kyiv, making an attack on the city easier. Russia says its troops will return to their permanent bases after the drills end.

Ukraine has launched its own 10-day military exercises, though officials have given few details.

Moscow says it cannot accept that Ukraine – a former Soviet republic with deep social and cultural ties with Russia – could one day join the Western defence alliance Nato and has demanded that this be ruled out.

Russia has been backing a bloody armed rebellion in Ukraine’s eastern Donbas region since 2014. Some 14,000 people – including many civilians – have died in fighting since then.

There is some suggestion that a renewed focus on the so-called Minsk agreements – which sought to end the conflict in eastern Ukraine – could be used as a basis to defuse the current crisis.