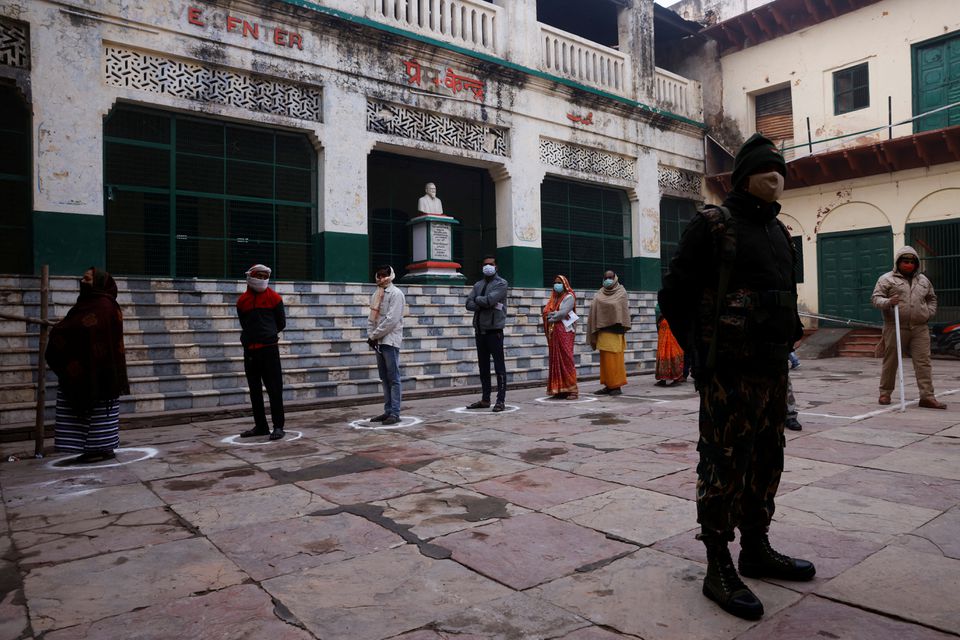 India’s most populous state of Uttar Pradesh began voting on Thursday in the first of a series of local elections that will be a key test of the popularity of Prime Minister Narendra Modi and his ruling party, Reuters reported.

With a population almost as big as that of Brazil, keeping power in the bellwether state would give the Bharatiya Janata Party (BJP) a boost in its bid for a third successive victory at nationwide parliamentary polls due by 2024.

In Vrindavan, a Hindu holy city around 160 km (100 miles) south of India’s capital New Delhi, saffron-clad monks bundled up against the winter cold waited in line with other locals to cast their votes.

“If people want to have a good government, then they have to come out to vote”, said 41-year-old Acharya Udit Narayan Diwedi, who said he voted for the BJP.

Defeat in Uttar Pradesh, or in any of the other three states it holds that also stage elections this month, would add to pressure on the Hindu nationalist party amid criticism of high unemployment and its handling of the COVID-19 pandemic.

“If the BJP loses, especially in UP, that will be a big setback,” said Rahul Verma, a fellow at New Delhi-based think-tank Centre for Policy Research. “But you can call this a semi-final. The game in 2024 will be very, very different.”

For the main opposition Congress party, led by the Nehru-Gandhi dynasty, the calculation appears more bleak. Of the five states where voting begins this month, it holds only Punjab in the northwest.

“Congress desperately needs to win states, even if it’s smaller states, just to get back in the habit of winning. Otherwise they are in trouble,” Verma added.

Failure to do so would lead to more questions over the leadership of Rahul Gandhi, whose father, grandmother and great-grandfather have all served as prime ministers but who has struggled to dent Modi’s high ratings.

During campaigning, the BJP has appealed to large Hindu majorities in the northern states of Uttar Pradesh and Uttarakhand. Both are home to important holy sites, some of which are disputed by Hindus and minority Muslims.

Opinion polls suggest the party will win the vote in both states, despite some opposition parties seeking to mirror its Hindu-first agenda and appeal to its support base.

“We have seen all political parties playing within the same field of the BJP,” said Nilanjan Mukhopadhyay, author of a biography of Modi, on the campaign so far. “That is one of their biggest successes.”

Congress and activists have criticised the approach, saying that it risks stoking communal tensions that have flared up into deadly violence in the past.

Yogi Adityanath, a hardline Hindu monk who is seeking re-election as chief minister of Uttar Pradesh, touted his record on fighting crime, and said that law and order took precedence over religion.

“My government dealt with the issues of corruption,” he told a small group of reporters on Monday.

“Law and order has improved markedly and police action during my rule was taken against gangsters and mafia groups without discriminating on the basis of their caste or religion.”

Uttar Pradesh, home to around 200 million people, votes in seven phases ending on March 7, while most other states begin polling in the coming days. Counting in the five states begins on March 10, with the results expected soon after.

The BJP faces a challenge from Congress in the northeastern state of Manipur, while in the western state of Goa, the Aam Aadmi Party (AAP) is trying to expand its reach beyond its traditional base of India’s capital New Delhi.

The fifth state, Punjab, looks like a close contest between the ruling Congress, AAP and several regional parties.