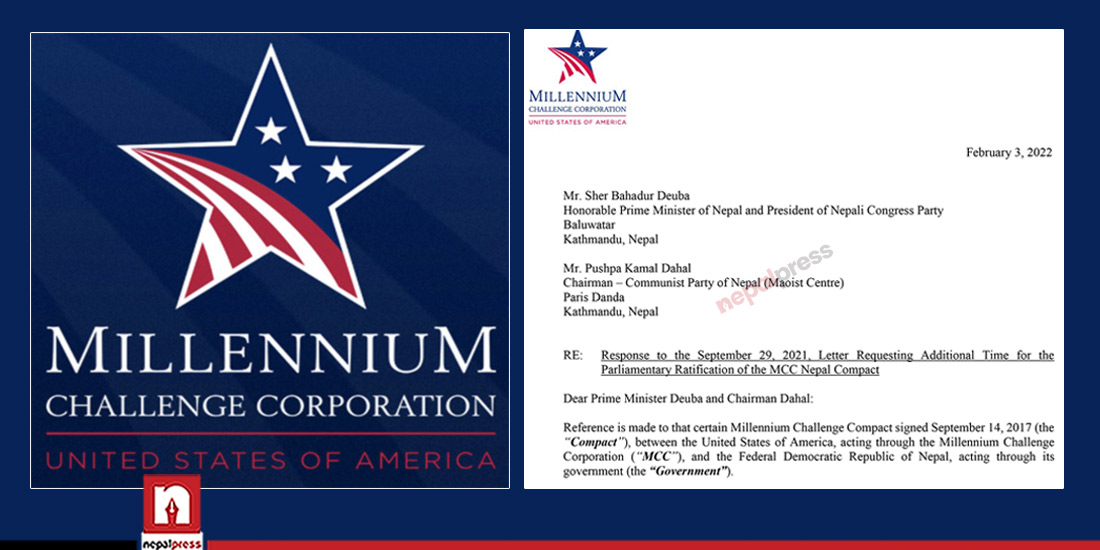 KATHMANDU: The United States has given the government of Nepal a deadline of February 28 to endorse the Millennium Challenge Corporation (MCC) compact from the Parliament.

“MCC believes that continuing with the compact is Nepal’s sovereign choice. We have worked together with the government of Nepal for close to decade to move our partnership forward for the people of Nepal. We stand ready to help the people of Nepal reduce poverty through inclusive and sustainable economic growth if Nepal’s leaders choose to do so,” the letter read, adding, “We value the partnership with the government of Nepal and look forward to working together to create economic opportunities in Nepal for its people in the coming years.”

PM Deuba and Chairman Dahal on September 29 wrote a letter to the MCC expressing their commitment to endorse the compact at the earliest.

Reminding the letter sent by PM Deuba and Dahal, Fatema Sumar urged the leaders to reach an agreement on the issue by February 28.

“Without action on your part by February 28, the MCC board will discuss next steps as of its March 22 meeting, including whether to continue with the compact,” the letter further read. “Absent ratification, it is within the board’s authority to discontinue Nepal’s eligibility to receive the $500 compact grant with the grant from the United States. Such a decision would end MCC’s partnership with Nepal.”