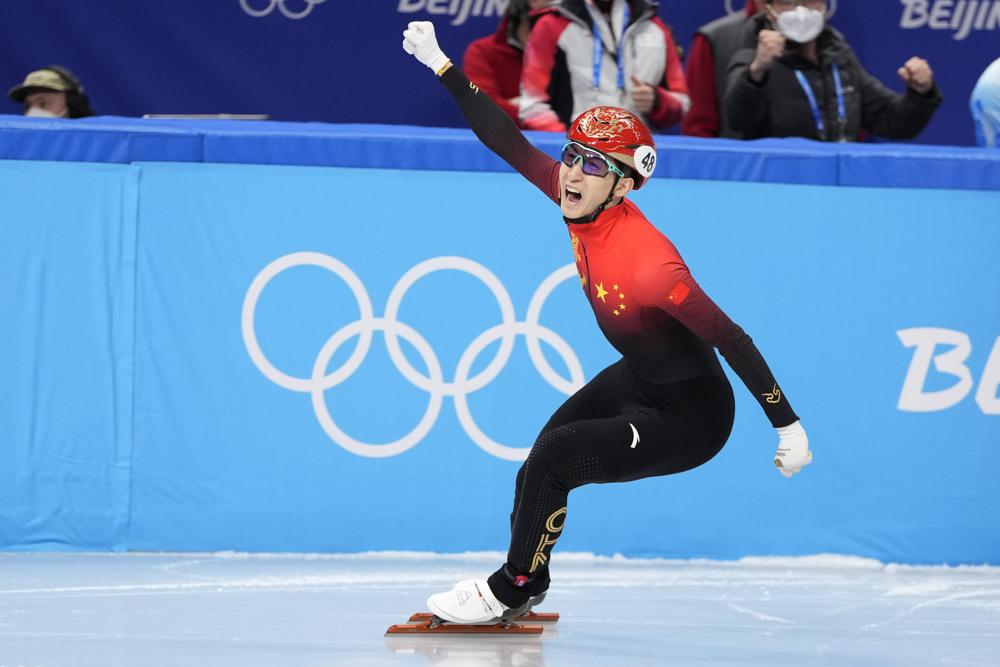 Asia is a hotbed of the sport known as roller derby on ice, although the typically raucous atmosphere Saturday night was greatly subdued by COVID-19 restrictions at the Olympic venues.

Wu Dajing edged Pietro Sighel of Italy by .016 seconds — or half a skate blade — to claim gold. Hungary earned bronze.

“It was a huge relief,” Wu said. “Now we finally realized our dream on the first day.”

The results were delayed while the referee reviewed the race. Canada was penalized for pushing from behind and causing contact with Hungary late in the race.

That set the stage for China to build a big lead over Italy going into the latter stages of the race. But the Italians rallied, careening around the rink in hot pursuit of the home team. Sighel nearly caught Wu in what would have been a huge upset.

“I never imagined today would be this tough,” Ren said.

China was the gold-medal favorite coming in, having led the World Cup standings this season. But the host nation wasn’t taking anything for granted.

“Even until this morning we had been working on the strategy, still training, still studying how to be better,” Fan said.

China’s first gold of the games brought cheers from a crowd gathered in front of a big screen outdoor TV in Beijing’s Wangfujing shopping district.

“It was thrilling. I was very excited and was filled with all kinds of emotions as I watched the Chinese team approach the finish step by step,” said Cheng Hongwei, who had stopped to watch while strolling down the main pedestrian street.

“It’s a very exciting thing to see the Chinese national flag being raised again, and I’m very proud as a Chinese,” said another Beijing resident Jolin Li, who said her 7-year-old daughter is a huge fan of the Winter Games.

The final got off to a rocky beginning, with Hungary and Canada crashing in the first turn, forcing the race to be called back to the start.

China needed some help even getting to the A final.

It took penalties to the Americans and Russians to elevate the Chinese to the final, along with Hungary, which won in the semifinals.

The U.S. was called for blocking by an infield skater after the Americans had finished second. The Russians were penalized for an extra skater on the team causing an obstruction.

In the first semifinal, Canada and Italy advanced to the A final. The Netherlands, ranked second in the world, didn’t advance when Suzanne Schulting crashed in a turn early in the race.

Italy’s Arianna Fontana made history with her silver medal in the relay. It was her ninth medal, breaking a tie with Apolo Ohno and Viktor An for most career medals. She was already the most decorated female short track skater.

“That doesn’t mean that I’m better than them,” said Fontana, who received a congratulatory hug from An. “They were great when they skated and it doesn’t change that. It’s just a different era.”

The 31-year-old Italian also became the first skater to win short track medals at five Olympics. She almost thought her team had won.

“He was inching up on the Chinese skater. I thought he got it,” Fontana said of her teammate Sighel. “It was pretty close. It was amazing to watch him fight for a gold medal.”

Brothers Liu Shaoang and Liu Shaolin Sandor led Hungary to bronze in the relay. Their mother is Hungarian and their father is Chinese. Four years ago, they helped Hungary win the 5,000-meter relay, the nation’s first Winter Olympics gold.

Liu Shaoang arrived in China later than his teammates after contracting a case of COVID-19.

Joining the Liu brothers on the podium was U.S.-born teammate John-Henry Krueger, who skated in the relay’s earlier rounds. He won a silver in the 1,000 for the U.S. four years ago before switching allegiances.

In the heats of the women’s 500, Schulting set an Olympic record to advance to Monday’s quarterfinals. Also moving on were Fontana, Fan, Kim Boutin of Canada and Minjeong Choi of South Korea, as well as American teammates Maame Biney and Kristen Santos.

In the men’s 1,000 heats, defending Olympic champion Wu moved on, along with Daeheon Hwang of South Korea, who set an Olympic record. Krueger advanced to Monday’s quarterfinals, as did the Liu brothers.

Music blared, colored lights flashed and one of the Olympic mascots waddled around, but the usually raucous atmosphere for short track was absent at Capital Indoor Stadium. COVID-19 restrictions kept most of the 17,345 seats empty. The only spectators were Chinese and they shouted behind masks for their country’s skaters, but otherwise clapped politely and waved tiny flags.

The arena is famous for hosting table tennis matches between China and the United States in 1971 that became known as ping pong diplomacy, an event that paved the way for U.S. President Richard Nixon to visit Beijing the following year. It was the site of volleyball at the 2008 Summer Olympics.