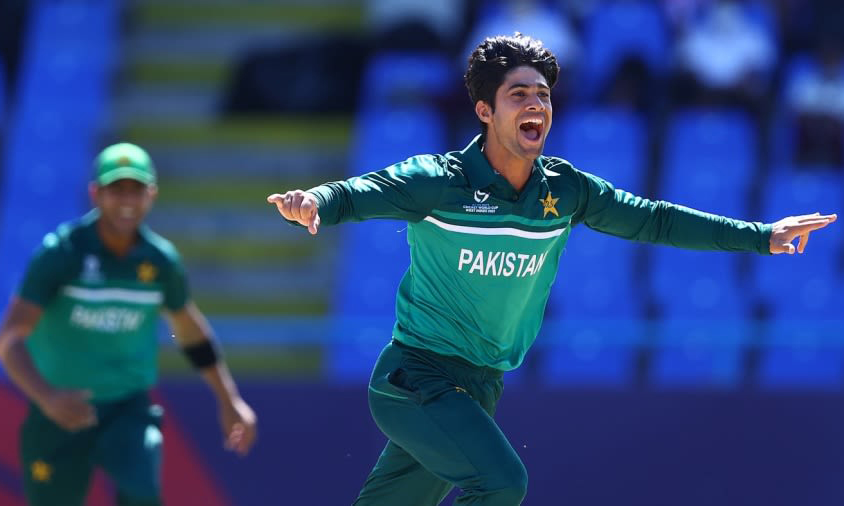 Pakistan eased past Sri Lanka in the fifth-place playoff match on Thursday, signing off with a victory in the U19 World Cup. Both sides’ chances of lifting the trophy ended at the quarter-final stage last week. In addition to winning the playoff game, Pakistan captain Qasim Akram also wrote history in U19 World Cups with a sensational record to his name, Hindustan Times reported.

After the Pakistan openers – Muhammad Shehzad (73) and Haseebullah Khan (136) – gave a strong start to the side with a 134-run stand, Akram carried the momentum with an excellent knock of unbeaten 135 to take the side to a strong total of 365/3.

In return, Sri Lanka failed miserably in the run-chase as they were bowled out on merely 127. Akram shined with the ball as well, as he opened the bowling and picked a five-wicket haul (5/37) to etch his name in the history books.

Akram became the first player to score a century and take a five-wicket haul in U19 World Cup history.

Akram – an off-spinner – wreaked havoc with the new ball, removing openers Chamindu Wickramasinghe and Pawan Pathiraja for a combined total of just one, with Shevon Daniel also falling between the two. Ranuda Somarathna also went for a duck with Akram single-handedly reducing Sri Lanka to 15-4.

From then on Sri Lanka were purely batting for pride. Their captain Dunith Wellalage didn’t go without a fight and made a brave 40, which included five boundaries. Vinuja Ranpul was in a similarly defiant mood hitting 53 not out and his side’s only two sixes of the match.

But it wasn’t enough and Pakistan cleaned up a 238 run victory when Treveen Mathew was hit on the pads by Zeeshan Zameer’s full delivery, bowling out the Sri Lanka team inside 35 overs to secure fifth place.