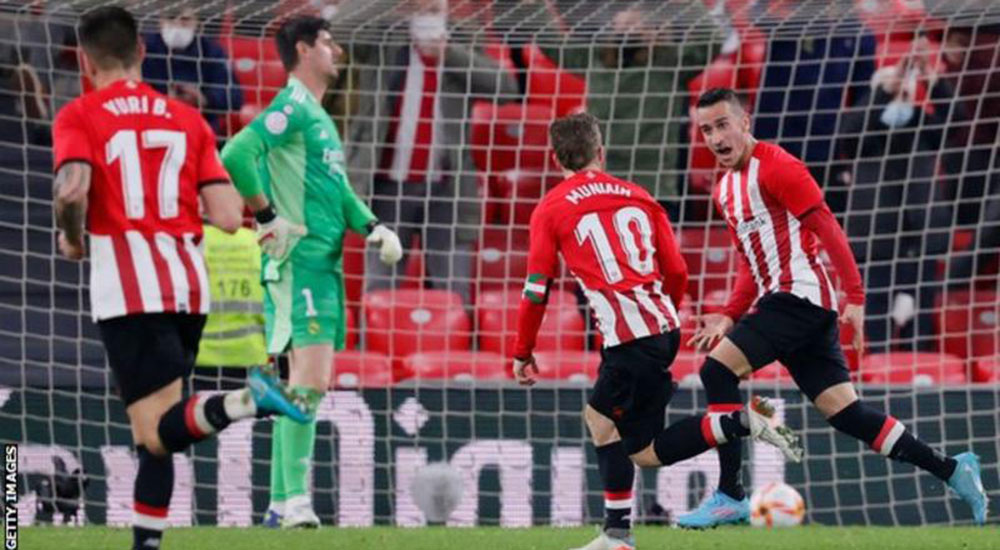 A stunning last-minute strike by substitute Alex Berenguer handed Athletic Bilbao a shock 1-0 win over Real Madrid, eliminating them from the Copa del Rey in the quarter-finals on Thursday, Reuters reported.

Athletic, who knocked out Barcelona in the previous round, ended a run of three successive defeats by Real in all competitions over the last two months thanks to Berenguer’s last-gasp goal.

The home team dominated the game from start and piled on the pressure on Real until they finally broke the deadlock in the 89th minute, with Berenguer firing into the right corner of the net.

Athletic joined Valencia, Rayo Vallecano and Real Betis in the semi-finals. The draw will take place on Friday with the semi-finals being played over two legs.

Real Madrid were clearly hampered by the absence Karim Benzema, who is still recovering from a leg muscle injury, and a below par performance from Vinicius Jr.

The 21-year-old forward appeared to be jetlagged after returning from international duty from Brazil earlier in the week. Rodrygo had similarly been included just days after playing in South America.

“We had the game under control and we could have had an opportunity to win in extra-time but they managed to score late and they deserved the win,” coach Carlo Ancelotti told reporters.

When asked why he opted to play Vinicius and Rodrygo instead of Gareth Bale and Eden Hazard, who have both fallen out of favour with the coach and stayed behind in Madrid, Ancelotti said: “Other players also didn’t play. Why you don’t ask about them too?

“I’m not punishing anyone. They all have to compete to play.”