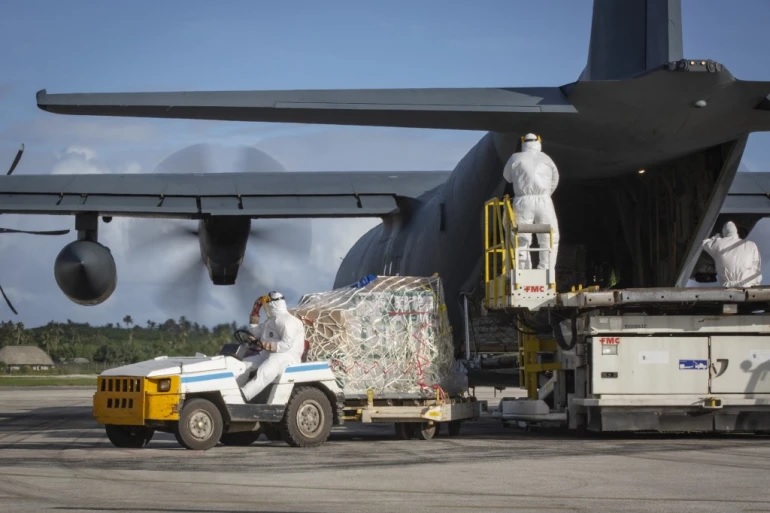 Disaster-hit Tonga has gone into lockdown after detecting its first community transmissions of COVID-19 since the start of the pandemic, Aljazeera reported.

The lockdown began at 05:00 GMT on Wednesday, days after the Pacific island nation began receiving foreign aid in the wake of a deadly volcanic eruption that also generated huge tsunami waves around the Pacific.

While the first of Tonga’s community cases were detected in two port workers in the capital, Nuku’alofa, on Tuesday, officials said the men were not on the docks being used by foreign navies to deliver aid.

Australian navy ship the HMAS Adelaide was known to have at least 23 COVID-19 cases on board when it docked at Vuna wharf last week and offloaded 250 pallets of aid to a quarantine zone.

Crew members on board aid flights from Japan and Australia also reported infections.

The workers showed no symptoms but Tongan radio station BroadcomFM reported on Wednesday another three cases had been detected among three of the workers’ family members of the workers, bringing total case numbers to five.

Tonga has previously recorded only one case – in a quarantined traveller returning from New Zealand.

“The most important issue at the moment is for us to slow down [the spread of the virus] and stop those who have been affected. That is the reason for our national lockdown,” Tonga Prime Minister Siaosi Sovaleni told an emergency press conference on Wednesday.

He said the COVID situation in the country would be reassessed “every 48 hours”, and the government would decide whether to end or extend the lockdown depending on the outcome.

The stay-at-home order means all businesses and schools must close, with only essential services allowed to operate.

Meanwhile, in Australia, officials played down concerns that the crew of the HMAS Adelaide may have been responsible for Tonga’s outbreak.

Tonga’s deputy head of mission in Australia, Curtis Tu’ihalangingie, told the Reuters news agency that the community cases were detected at a different wharf and “not the one that the HMAS Adelaide used”.

“The wharf that had the case is a different one, used for commercial cargoes,” he said.

The Australian Defence Force’s Chief of Joint Operations Greg Bilton also said it did not appear the HMAS Adelaide was the source and samples from the two wharf workers would be sent to Australia for testing to verify the origin of the COVID strain.

“I don’t think there’s any connection, there’s no evidence of that,” he told Sky News.

Tu’ihalangingie also told Reuters the delivery of aid would not change as a result of the COVID-19 cases but that “front-liners will need to be more careful”.

The Tongan government, in a bid to keep the virus at bay, has insisted on contactless delivery of aid, and all pallets unloaded from aircraft or ships are isolated for 72 hours before being distributed by the local emergency service.

Tonga has maintained border restrictions since March 2020, allowing it to contain the virus, while also implementing a nationwide vaccination programme.

According to the health ministry, 83 percent of the eligible population – about 77,000 people over the age of 12 – have been fully vaccinated, while 96 percent have received at least their first dose.

Tonga and several other small Pacific nations, such as Palau and Fiji, were among the last places on the planet virus outbreaks arrived in. The three island nations have also managed to ramp up their vaccination programmes in the last two years.

On Tuesday, the International Federation of Red Cross Red Crescent Societies warned that a record surge in COVID-19 cases was threatening to overwhelm hospitals and fragile health systems in some other Pacific island nations, including the Solomon Islands, where vaccination is still low.