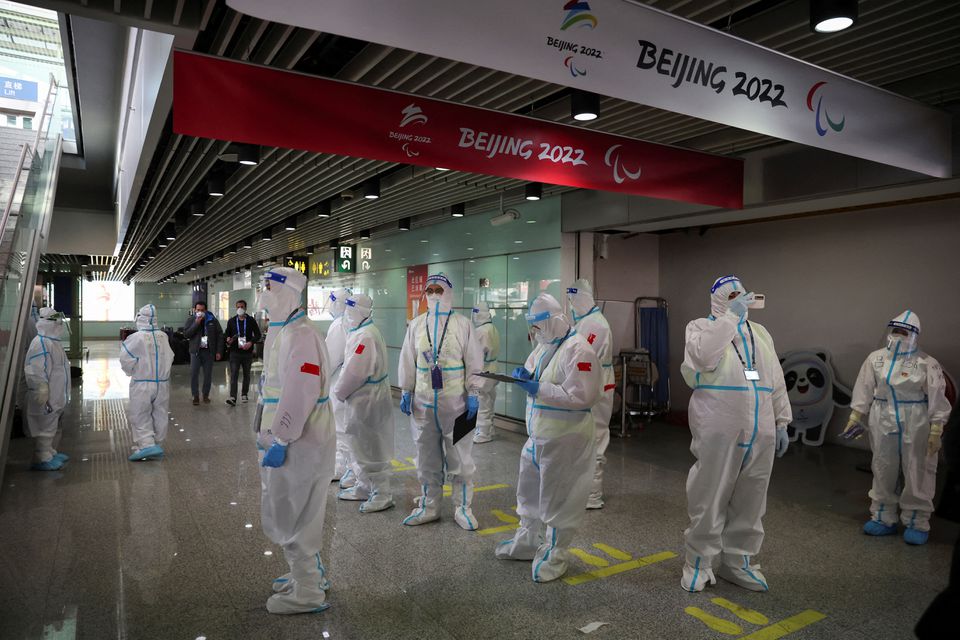 During the past four days China has detected some 119 cases of COVID-19 among athletes and personnel linked to the Beijing Winter Olympics, with authorities imposing a “closed loop” bubble to keep participants, staff and media separated from the public, Reuters reported.

The tally from the weekend showed 37 new cases on Sunday, and 34 on Saturday, with most testing positive after arrival at the airport, Games organisers said.

On Monday, Russian biathlete Valeria Vasnetsova said her own Olympic ambitions were over after testing positive twice following her arrival in Beijing, one of three Russian positive tests announced on Monday.

“Unfortunately my Olympic dream will remain just a dream,” Vasnetsova wrote on social media. “Maybe one day I will find the strength to rise again but it will be a completely different story.”

Eight athletes or team officials were among 28 people who had tested positive on arrival at the airport on Sunday.

International Olympic Committee member Emma Terho, who heads the IOC’s athletes commission, also tested positive and said she has been in isolation since the weekend.

“Even though this is not the start I envisaged, I was happy to see the protocols that Beijing 2022 has put in place are working well,” Terho, a retired Finnish ice hockey player, said on social media.

Some 3,000 athletes, along with coaches, officials, referees, federation delegates and media are expected for the Games, due to run from Feb. 4-20.

The “closed loop” will allow them to move between accommodation and Olympic venues on official transport but they are not allowed out to move freely in public.

In contrast to many countries seeking to live with COVID-19, China has isolated itself with a zero-tolerance policy, cancelling nearly all international flights.

An opinion piece in the People’s Daily — the ruling Communist Party’s official newspaper — praised the work done to prepare for the Games and battle the spread of the virus.

“The epidemic and control measures of the Beijing Winter Olympics are the epitome of China’s successful experience in fighting the epidemic, and are also a focused demonstration of China’s spirit and China’s strength.”

Olympic athletes and others must fly directly into the city on charter flights and are tested daily.

Athletes, however, have also been testing positive prior to their arrival in Beijing, with the world’s leading women’s ski jumper, Marita Kramer of Austria, rescheduling her departure in an effort to get healthy in time for her competition.

Kramer, who leads the women’s overall World Cup standings, tested positive in Germany, the last competition ahead of the Games.

“Officials are at the moment working on a time plan in order to make it possible for the World Cup leader to take part in the Olympic Games in Beijing,” the Austrian ski federation said.

There was, however, good news for the Australian curling team after curler Tahli Gill returned two negative tests following an initial positive in the Chinese capital on Sunday.

Gill and teammate Dean Hewitt had been in isolation for two days after she tested positive at Beijing airport.

“We have treated this time as a rest day and a time to really focus on our Olympic goals,” the pair said in a statement.