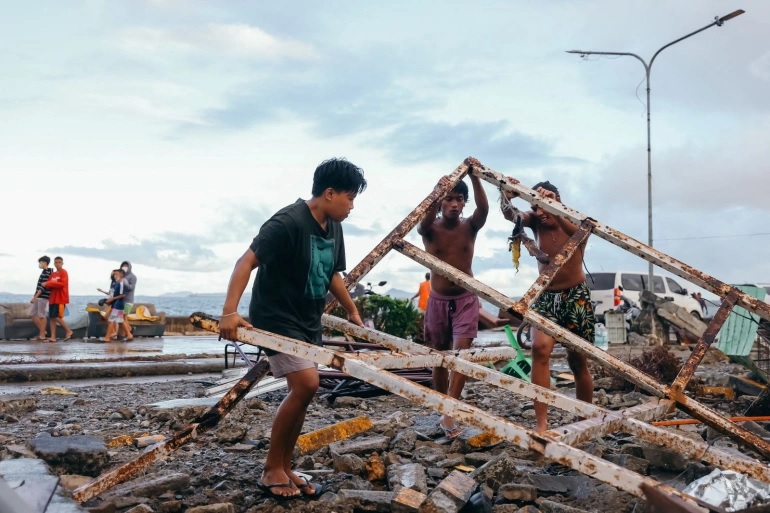 The International Federation of Red Cross and Red Crescent Societies (IFRC) estimates Super Typhoon Rai destroyed or damaged a “staggering” number of houses as it tore across the Philippines in December, leaving more than 400 people dead, Aljazeera reported.

In an update on Tuesday, the IFRC said its assessments indicated the storm destroyed or damaged “a staggering 1.5 million houses, more than any other typhoon in recent decades”.

Rai, with winds of up to 193 kilometres per hour (120 miles per hour), made landfall in the country’s surfing capital of Siargao, a tiny island in eastern Mindanao with a population of roughly 180,000 people.

According to the provincial government, more than 90 percent of the buildings on the island, including schools and town halls, were severely damaged.

The entire island has been without power ever since and remains reliant on electric generators that provide limited supply, while many of its residents are living in makeshift structures and even evacuation centres.

In one small village of Cangcohoy, inland from Siargao, 15 families continue to shelter in a school building after their homes were destroyed, according to the ANC, a Filipino cable news channel. Many of those families also lost their livelihoods, and they have been relying on aid, mostly from private donors, to survive.

“It’s a little over one month since Typhoon Rai slammed into the Philippines, yet millions of people still urgently need humanitarian support, including homes, clean water supplies and healthcare,” IFRC country head Alberto Bocanegra said in a statement.

“This Super Typhoon has caused enormous devastation, destroying or damaging more homes than any storm in recent decades.”

According to estimates, the damage left by Rai could be as much as $790m.

“This is a much bigger disaster than the world realised a month ago,” said Philippine Red Cross chairman Richard Gordon, who is also a senator.

“People who relied on farming, fishing and tourism can’t earn an income now. Millions of people don’t have a roof over their heads.”

A top priority includes the rebuilding of safer shelters as well as providing displaced families with living essentials – from kitchen sets to sleeping kits and clothing, according to the international aid organisation.

There have also been reports of the government ordering residents, including in Siargao, not to return and rebuild in their previous plot of land by the sea, and many are needing legal support on housing, land, and property issues.

Since Rai hit the country, the Philippine Red Cross has reached 36,000 people with emergency shelter support, including providing construction materials and tarpaulins to build temporary shelters.

“The typhoon [Rai] comes in the middle of a pandemic and a political campaign, which draw attention away from what truly is a catastrophe. This must not become forgotten tomorrow morning,” Gordon, head of the Red Cross in the Philippines, added.

The IFRC’s Bocanegra added that while Filipinos have recovered from previous disasters and are “tough” when it comes to rebuilding, “more must be done to help” those whose homes have been destroyed.

The IFRC said that longer-term support is also required to help families build safer homes, including those living on isolated islands and in remote or hard to reach areas.