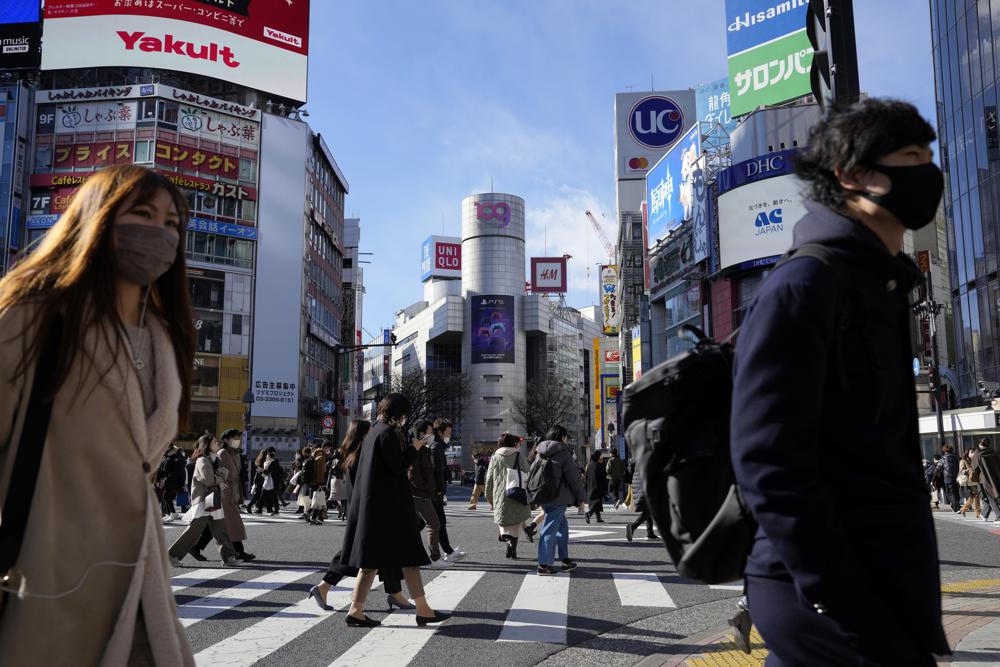 Restaurants and bars will close early in Tokyo and a dozen other areas across Japan beginning Friday as the country widens COVID-19 restrictions due to the omicron variant, which has caused cases to surge to new highs in metropolitan areas, Associated Press reported.

The restraint, which is something of a pre-state of emergency, is the first since September and is scheduled to last through Feb. 13. With three other prefectures — Okinawa, Hiroshima and Yamaguchi — under similar measures since early January, the state of restraint now covers 16 areas, or one-third of the country.

While many Japanese adults are fully vaccinated against COVID-19, few have gotten a booster shot, which has been a vital protection from the highly contagious omicron variant of the coronavirus.

The Health Ministry on Friday approved Pfizer vaccinations for children aged 5-11, who are increasingly vulnerable to infection.

Throughout the pandemic, Japan has resisted the use of lockdowns to limit the spread of the virus and has focused on requiring eateries to close early and not serve alcohol, and on urging the public to wear masks and practice social distancing, as the government seeks to minimize damage to the economy.

Under the latest measures, most eateries are asked to close by 8 or 9 p.m., while large events can allow full capacity if they have anti-virus plans. In Tokyo, certified eateries that stop serving alcohol can stay open until 9 p.m. while those serving alcohol must close an hour earlier.

Mitsuru Saga, the manager of a Japanese-style “izakaya” restaurant in downtown Tokyo, said he chose to serve alcohol and close at 8 p.m. despite receiving less compensation from the government.

“We cannot make business without serving alcohol,” Saga said in an interview with Nippon Television. “It seems only eateries are targeted for restraints.”

Some experts question the effectiveness of placing restraints only on eateries, noting that infections show no signs of slowing in the three prefectures that have already been subjected to the measures for nearly two weeks.

After more than two years of repeated restraints and social distancing requests, Japanese are increasingly becoming less cooperative to such measures. People are back to commuting on packed trains and shopping at crowded stores.

Japan briefly eased border controls in November but quickly reversed them to ban most foreign entrants when the omicron variant began spreading in other countries. Japan says it will stick to the stringent border policy through the end of February as the country tries to reinforce medical systems and treatment.

The tough border controls have triggered criticism from foreign students and scholars who say the measures are not scientific.

A group of scholars and Japan-U.S. experts recently launched a petition, led by Japan Society head Joshua Walker, calling on Prime Minister Fumio Kishida and his government to allow foreign scholars and students to enter the country again under careful preventive measures.

A letter to Kishida, signed by hundreds of academics and experts in Japan-U.S. studies, urged his government to relax border controls to allow educators, students and scholars to enter Japan and pursue their academic activity. Many of them have been forced to give up Japan studies and focus instead on other countries, including South Korea.

“They become the bridges between Japan and other societies. They are future policymakers, business leaders, and teachers. They are the foundation of the U.S.-Japan alliance and other international relationships that support Japan’s core national interests,” the letter said. “The closure is harming Japan’s national interests and international relationships.”

Japan recently announced it will allow 87 students on Japanese government scholarships to enter the country, but petitioners say there are many others on foreign government-sponsored scholarships who still cannot get in.

At a Tokyo metropolitan government task force meeting, experts sounded the alarm at the fast-paced upsurge led by omicron.

Norio Ohmagari, Director of the Disease Control and Prevention Center of National Center for Global Health and an advisor to the Tokyo metropolitan government panel, said Tokyo’s daily new cases may exceed 18,000 within a week if the increase continues at the current pace.

Though only some of the soaring number of infected people are hospitalized and occupying less than one-third of available hospital beds in the Japanese capital, experts say the rapid upsurge of the cases could quickly overwhelm the medical systems once the infections further spread among the elderly population who are more likely to become seriously ill.

Surging infections have begun to paralyze hospitals, schools and other sectors in some areas.

The ministry has trimmed the required self-isolation period from 14 days to 10 for those who come into close contact with someone who tests positive for COVID-19, and to seven days for essential workers if they test negative.

While about 80% of Japanese have received their first two vaccine doses, the rollout of booster shots has been slow and has reached only 1.4 % of the population so far.