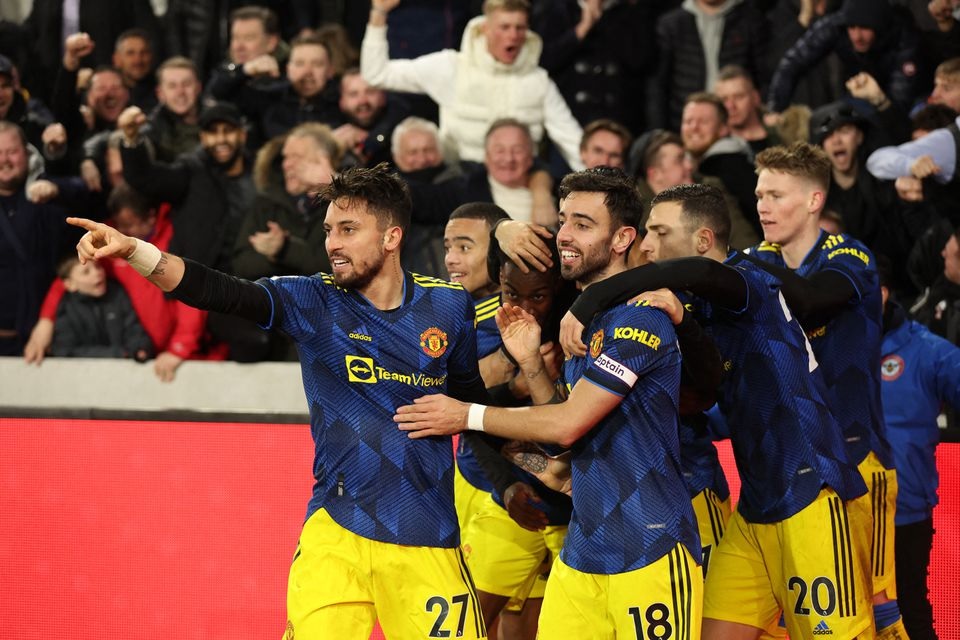 Manchester United rode their luck before burying luckless Brentford with a second-half goal blitz to claim a 3-1 away victory on Wednesday and boost their challenge for a top-four finish in the Premier League, Reuters reported.

A United win did not look likely as Brentford dominated the first half but the visitors were clinical after the break with goals by Anthony Elanga, Mason Greenwood and Marcus Rashford securing a flattering victory.

Brentford should have been comfortably ahead by halftime but spurned numerous chances with Mathias Jensen twice denied by the outstretched leg of United keeper David De Gea.

Several other opportunities went begging and they were made to pay for their profligacy when Elanga nodded United in front in the 55th minute and Greenwood tapped in after a counter-attack before substitute Rashford rifled in his side’s third in the 77th minute to deflate Brentford.

Ivan Toney pulled a goal back from close range with five minutes remaining but it was scant consolation for the hosts who slumped to a third successive defeat.

Cristiano Ronaldo returned to United’s starting line-up after recovering from injury but was subdued and reacted angrily after being substituted in the second half.

United remained in seventh spot but moved level on 35 points with sixth-placed Arsenal and are only two behind West Ham United who occupy fourth.

“First half was not good in all aspects of the game,” United manager Ralf Rangnick said. “In the second half we were more urgent, attacking higher up the pitch and taking the right decisions in the counter attack and we scored, which is the big difference.”

Home manager Thomas Frank, whose side are 14th and 10 points above the bottom three, was baffled at the outcome.

“We destroyed them in the first half, they didn’t have a sniff, three huge chances and there could only have been one winner of this game,” he said.

“They are unbelievably lucky. Our intensity killed them.”

There was a buzz of anticipation around Brentford’s impressive Community Stadium with the west London club hosting United for the first time 1947 — the crowd warming up a chilly night with a rendition of their “Hey Jude” anthem.

Frank’s side have acquitted themselves well against the big boys in their first Premier League campaign, beating Arsenal on a memorable opening night, holding Liverpool and unluckily losing to Chelsea.

They battered a sloppy United in the first half too.

Jensen, one of five Danes in the Brentford starting line-up, twice had the goal at his mercy but his weak side-footed efforts were saved by De Gea.

Ronaldo was a virtual spectator and the closest United came before the break was a swerving effort by Diogo Dalot that flew wide of the post.

United started the second half with more urgency and a Ronaldo header from Fernandes’s cross glanced the crossbar.

Brentford went straight back on the counter-attack and Jensen was played in by Toney but again failed to beat De Gea.

United struck when Fred’s lofted ball found Elanga whose first touch flicked the ball up for him to head past Bees keeper Jonas Lossl who was handed a first Premier League start.

Rangnick’s side doubled their lead when Ronaldo chested the ball off to Fernandes who unselfishly squared to give Greenwood the easiest of tap-ins.

Rashford’s superb finish sealed the points before Toney at least gave the home fans something to cheer.