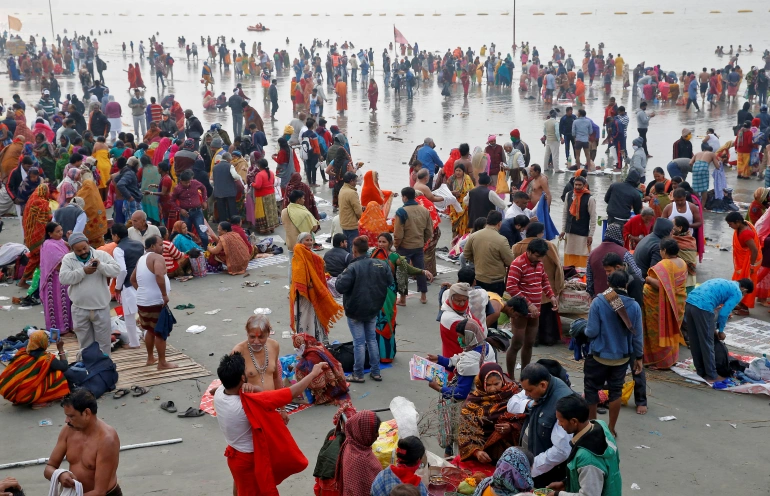 Nearly one million Hindu worshippers are expected to gather on the banks of the Ganges River this Friday and Saturday for a holy bath despite rising COVID-19 infections across the country, an official has told the Reuters news agency, Aljazeera reported.

India on Tuesday reported 168,063 new COVID-19 infections, a 20-fold rise in a month despite testing being well below capacity.

Most infected people have recovered at home and the level of hospitalisations has been less than half of that seen during the last major wave of infections in April and May.

Many states have announced night curfews while the capital New Delhi has also imposed a weekend lockdown, closed private offices as well as restaurants and bars in a bid to rein in the fast-spreading Omicron variant.

But tens of thousands of pilgrims have already reached the site of the annual Ganges ritual on an island in the eastern state of West Bengal, which is reporting the most number of cases in the country after Maharashtra state in the west.

“The crowd may swell to anywhere between 800,000 to one million. We are trying to implement all COVID protocols,” Bankim Chandra Hazra, a West Bengal minister in charge of organising the festival known as the Gangasagar Mela, told Reuters.

“We have also arranged for sprinkling of the holy water from drones so that there is no crowding … but the sadhus [Hindu holy men] are bent on taking the dip. We can’t prevent them.”

A similar big religious festival in the north of India last year helped spread the Delta variant that infected millions of people and killed tens of thousands.

The Calcutta High Court, responding to a plea from doctors who are worried the festival could become a virus “super spreader” event, ruled on Tuesday that all pilgrims must be tested for COVID-19.

It was not immediately clear how so many pilgrims could be tested over the next few days or if the ruling would be enforced.

Doctors had appealed to the court to reverse the decision to allow the festival this year. Bhramar Mukherjee, professor of epidemiology at the University of Michigan, has said the gathering could be “disastrous”.

Every year on January 14, on the important Hindu day of Makar Sankranti, pilgrims visit Gangasagar village for a dip at the confluence of the Ganges and the Bay of Bengal.

They believe doing so washes away their sins and those of their ancestors.

India has reported a total of 35.88 million COVID-19 infections, the world’s biggest tally after the United States. Deaths rose by 277 to 484,213 on Tuesday.

India conducted 1.6 million COVID-19 tests on Monday, while the capacity is more than two million. It has dropped the need for all close contacts of confirmed patients to get tested.