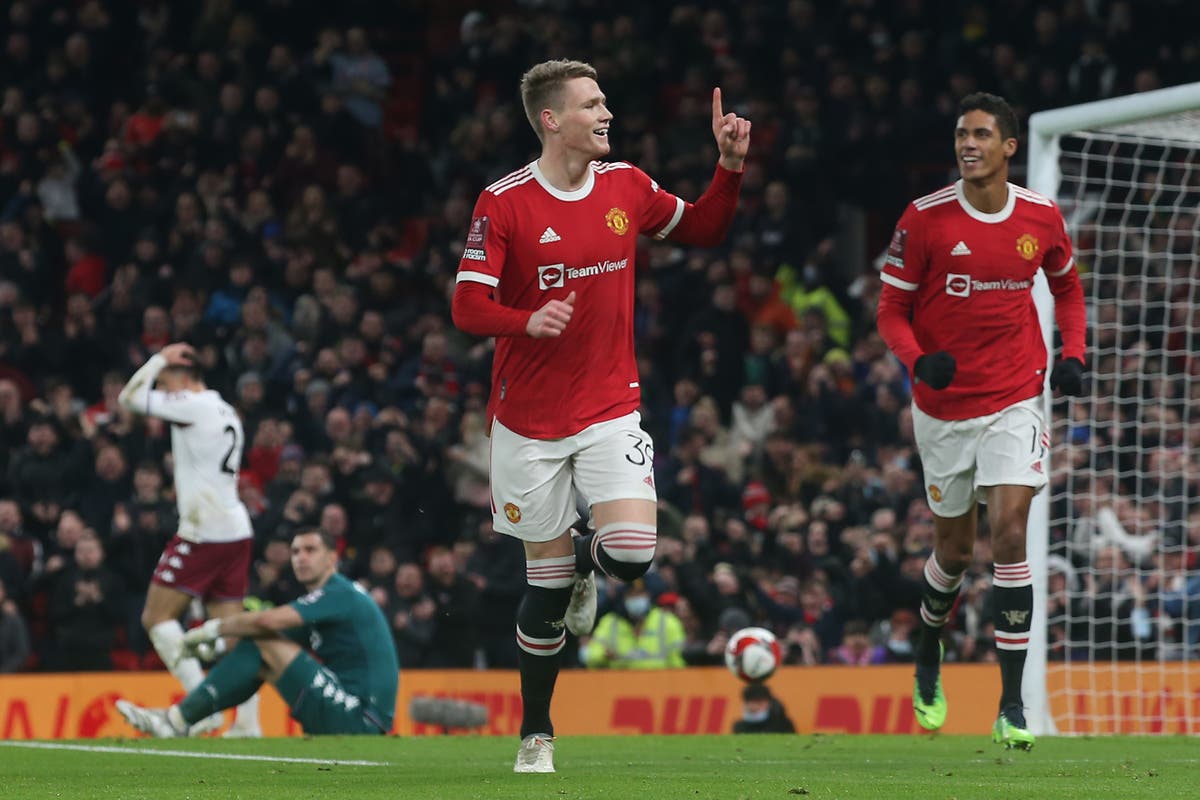 An early headed goal by Scott McTominay proved decisive for Manchester United as they held on by the skin of their teeth to beat Aston Villa 1-0 in an absorbing FA Cup third round tie at Old Trafford on Monday, Reuters reported.

While victory was a welcome relief for United manager Ralf Rangnick, it was a performance that showed just how much work he has to do if United are to challenge for silverware.

Villa will wonder how they bowed of the competition after responding to McTominay’s eighth minute opener with a dominant display, striking the woodwork twice, forcing David De Gea into several saves and having two goals disallowed.

McTominay glanced in Fred’s curling delivery to give the hosts a flying start, but from then on they struggled to contain a lively Villa side who played the better football.

The reward for 12-time FA Cup champions United is a home draw against second-tier Middlesbrough.

Steven Gerrard’s Villa will get a swift chance for revenge as they host United in the Premier League on Saturday.

The night’s big talking point was why Villa had an equaliser ruled out early in the second half.

John McGinn played a free kick towards Ezri Konsa who headed across goal for Danny Ings to bundle in with his thigh.

Villa celebrated what they thought was a deserved equaliser but referee Michael Oliver was immediately talking into his mouthpiece to his VAR assistants.

With TV replays focussing on whether Ings had been offside or had used his arm to score, Oliver was summoned to check a pitch-side monitor and, more than three minutes after the ball entered the net, ruled out the goal for an apparent block by Jacob Ramsey on Edinson Cavani as the ball was played in.

“The officials took three and a half minutes to settle that one. They have looked at two or three things in it,” Gerrard said. “When VAR is there and they make a decision you have to accept it. There is nothing you can do to change it.

“The easy way out is to blame luck and the officials, we won’t do that. We dominated for large parts but we were not ruthless enough.”

There was no real argument minutes later when Ings was played through and his dink over De Gea was converted by Ollie Watkins, but this time Villa were denied by an offside decision on Ings, despite the flag not being raised initially.

In the first half Watkins bundled wide from a Tyrone Mings flick-on and then smashed a shot against the crossbar after seizing on a mistake by Victor Lindelof, one of five changes to the United side from the defeat by Wolverhampton Wanderers.

De Gea was also forced into fine saves to deny John McGinn and Emiliano Buendia as Villa dominated while United were forced to play largely on the counter-attack.

Marcus Rashford wasted a chance to increase United’s lead just before the break while Luke Shaw’s piledriver was tipped over by Emiliano Martinez.

But the second half continued in the same manner with Villa in charge and United hanging on, although Rangnick’s side did regain some sort of control towards the end.

“To say that this was a perfect game, nobody would believe that of course it was not,” Rangnick said.

“We still have quite a few things we can get better at but clean sheet was important today and we worked together.

“Still a lot of things to improve but it is easier to do that with a 1-0 win.”