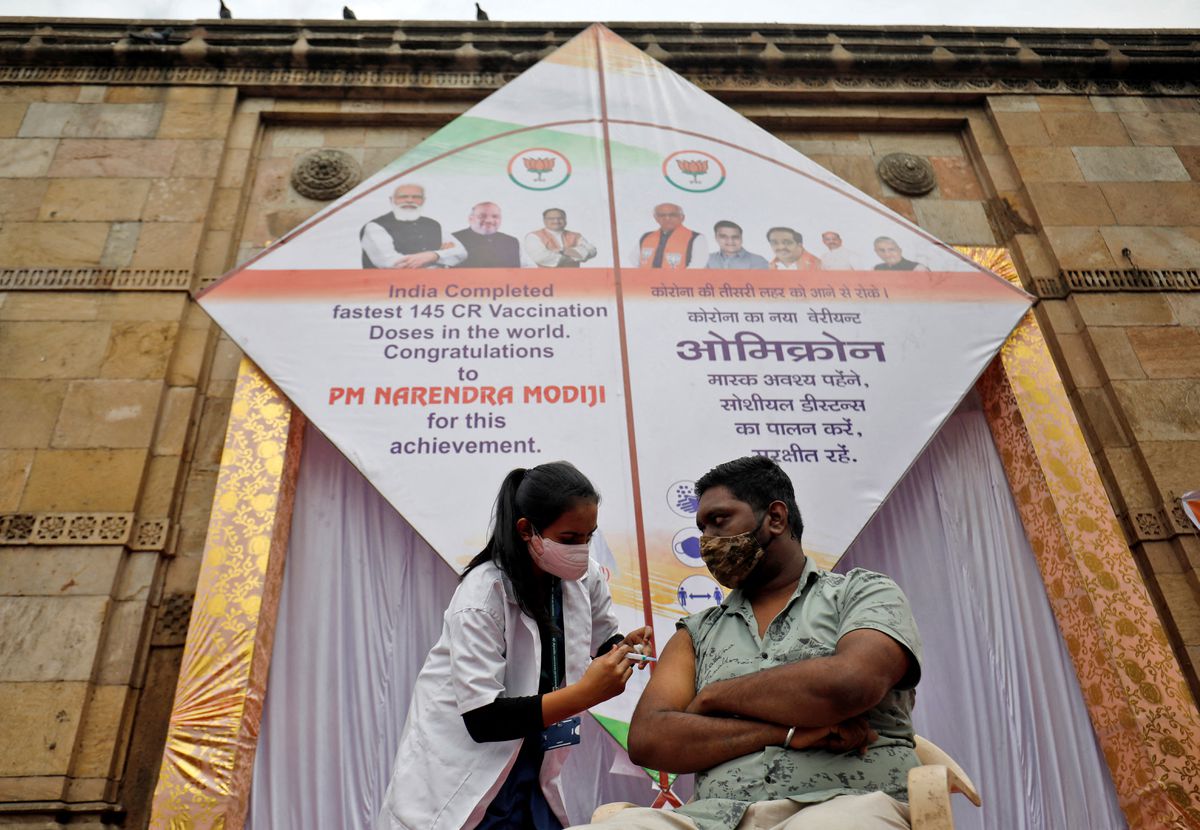 NEW DELHI: India’s daily COVID-19 cases jumped to 117,100 on Friday, a five-fold increase in a week and on course to overtake its previous infection peak as the fast-spreading Omicron variant replaces Delta in cities.

Government officials have privately said they are working under the assumption that daily infections will surpass the record of more than 414,000 set in May, given what has happened in countries, such as the United States where daily cases have risen past 1 million.

“We will clearly surpass our record shortly and reach a new peak by early February,” M.D. Gupte, a former director of the state-run National Institute of Epidemiology and an immunisation adviser to the government, told Reuters.

Given the size of our population, we will report more daily cases than the U.S. But what we have seen is that these cases are much more mild, so the need for hospitalisation and oxygen and all that is not picking up.”

He said India’s high rate of infection during a previous major wave in April and May, as well as vaccinations, would mean a reduction in the severity of the illness for those infected by the Omicron variant.

Nearly 70% of Indians had been infected with the coronavirus by the middle of last year, according to government serological surveys, while an almost equal proportion of adults have been fully vaccinated as of this week.

As cases have shot up, the health ministry said that starting from Jan. 11 arrivals from all countries would have to isolate at home for a week. Some 2% of such people would be tested at their port of arrival, and sent to institutional quarantine if found positive for COVID-19.

Earlier, only all those arriving from countries with a high number of cases had to be mandatorily tested and sent to institutional quarantine if found positive or home quarantine for a week if negative.

Health officials in the capital New Delhi and the state of Maharashtra, home to the city of Mumbai, which together account for the bulk of new cases, have said hospitals and testing infrastructure have yet to come under pressure as many people are recovering quickly at home.

In Mumbai, about a quarter of all tests are positive but fewer than a fifth of those who have contracted the virus have needed hospitalisation, Maharashtra Health Minister Rajesh Tope told reporters.

The city recorded 20,181 new infections on Thursday, well above its previous high of just over 11,000 set last year.

“Around 80% of the hospital beds are still empty,” he said. “Oxygen demand is not rising in proportion to the rising cases. Right now, there is no plan to impose a lockdown. If required, we may increase restrictions.”

The state has closed schools and colleges and limited the number of people allowed in cinemas, at weddings and other functions.

Delhi, where daily cases have risen by more than five times in a week, goes into a 55-hour lockdown from Friday night to Monday morning.

Authorities have also imposed a night curfew on weekdays, closed schools, and ordered most shops to open only on alternate days when there is no curfew.