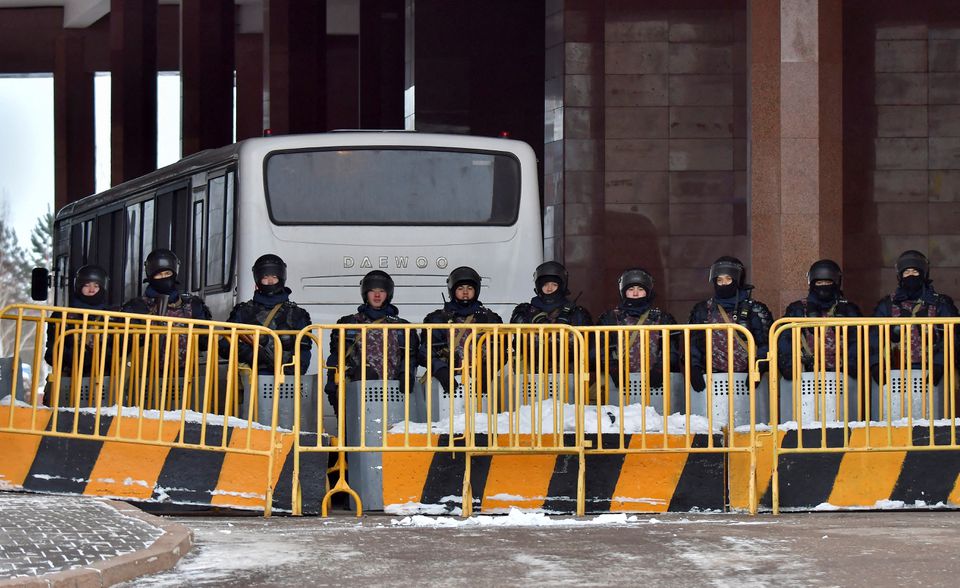 Security forces appeared to be in control of the streets of Kazakhstan’s main city Almaty on Friday morning and the president said constitutional order had mostly been restored, a day after Russia sent troops to put down a countrywide uprising, Reuters reported.

However, fresh gunshots could be heard in the morning near the city’s central square, where troops and protesters had battled through much of the previous day.

Dozens of people have been killed in clashes on the streets and protesters have torched and ransacked public buildings in several cities in the worst violence in the Central Asian state’s 30 years of independence.

Russia’s defence ministry, cited by Interfax, said more than 70 planes were flying round the clock to bring Russian troops into Kazakhstan, and they were now helping control Almaty’s main airport, recaptured on Thursday from protesters.

Demonstrations that began as a response to a fuel price hike have swelled into a broad movement against the government and ex-leader Nursultan Nazarbayev, 81, the longest-serving ruler of any former Soviet state.

He stepped down as president three years ago but his family is widely believed to have retained power in Nur-Sultan, the purpose-built capital that bears his name.

Nazarbayev’s hand-picked successor, President Kassym-Jomart Tokayev, called in Russian paratroopers on Thursday as part of a force from former Soviet states to help put down the uprising, which he has described as a revolt by foreign-trained militants.

“An anti-terrorist operation has been launched. The forces of law and order are working hard. Constitutional order has largely been restored in all regions of the country,” Tokayev said in a statement.

“Local authorities are in control of the situation. But terrorists are still using weapons and damaging the property of citizens. Therefore, counter-terrorist actions should be continued until the militants are completely eliminated.”

The interior ministry said 26 “armed criminals” had been “liquidated” and more than 3,000 detained, while 18 police and national guard servicemembers had been killed since the start of the protests.

A few hundred metres away, a dead body lay in a heavily damaged civilian car. In another part of the city, an ammunition shop had been ransacked. Military vehicles and about 100 people in military uniforms had also taken positions at another square in Almaty.

Widespread unrest has been reported in a number of other cities across the vast country of 19 million people. The internet has been shut off since Wednesday, making it difficult to determine the full extent of the violence.

Moscow’s swift deployment demonstrated the Kremlin’s readiness to use force to maintain its influence in the former Soviet Union. The Russian-led Collective Security Treaty Organization said its peacekeeping force from former Soviet states would number about 2,500 and would stay in Kazakhstan for a few days or weeks.

Moscow was “standing up for Kazakhstan and doing as allies should”, said Deputy Foreign Minister Alexander Grushko.

Tokayev’s administration said the force was still arriving and had not been engaged in combat or the “elimination of militants”.

The violence has been unprecedented in a country ruled firmly for decades by Nazarbayev, who was the last Soviet-era Communist Party boss still in powerin an ex-Soviet state when he passed the presidency on to Tokayev in 2019.

Tokayev’s administration said the identity of the detained militants was being established, and the possibility of them belonging to an extremist organisation was being investigated.

The president will address the nation on Friday, his administration said, asking people in Almaty to limit their travelling around the city while the “search for the remaining hiding bandits is under way.”

Kazakhstan is a major oil producer and the world’s top producer of uranium.

Oil output at its top field, Tengiz, was reduced on Thursday, the field’s operator Chevron (CVX.N) said, as some contractors disrupted train lines in support of the protests. Global oil prices have risen and the price of uranium has jumped sharply since the clashes began.

The country also accounts for close to a fifth of global bitcoin “mining”, the electricity-intensive process of recording cryptocurrency transactions, and Kazakhstan’s internet shutdown has curtailed the computing power of bitcoin’s global network.