More than 30,000 displaced by floods in Indonesia’s Sumatra 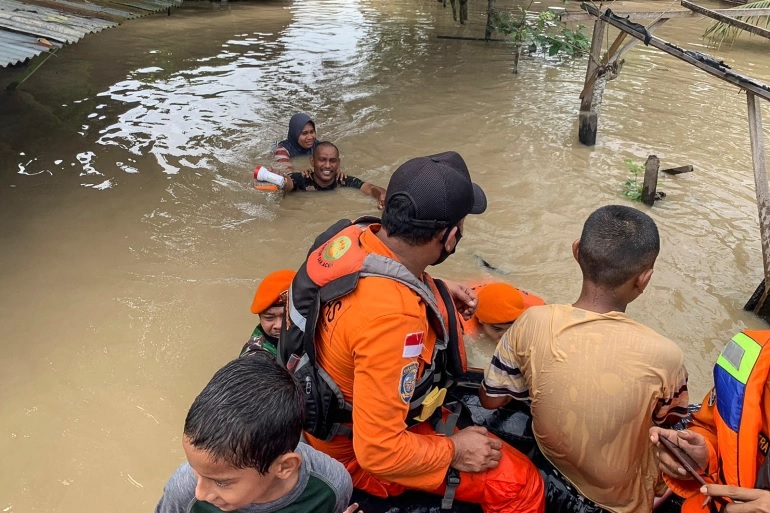 The new year has got off to a wet start on the island of Sumatra in Indonesia after torrential rains displaced some more than 30,000 people and left two children dead, according to the country’s Disaster Mitigation Agency, Aljazeera reported.

Heavy rain has pummelled parts of the western island including Jambi and Aceh provinces for days raising fears that the flooding will harm the local economy and lead to a spike in COVID-19 cases.

Muhammad Hatta says his village on the outskirts of the town of Lhoksukon in Aceh Province has been underwater since the beginning of the year, and there is little sign of respite.

Hatta, his wife and three sons managed to prevent the floodwaters from entering their home by blocking off their downstairs kitchen.

But while they have decided to stay put, they fear that the worst may be to come.

“We are more worried about what happens after the floodwaters subside,” Hatta told Al Jazeera.

“All the rice paddies in the area are underwater. The farmers were just about to harvest them, but crops usually die after three or four days of being completely submerged. The farmers will have lost everything.”

Aerial footage filmed by Hatta and seen by Al Jazeera showed impassable streets in and around his village, and homes submerged in milky brown water.

In addition to the ruined rice crop, Hatta says that day labourers in the area have also been unable to work due to the floods.

“The local economy has been destroyed,” he said.

Parts of neighbouring Malaysia have also been inundated after heavy rains lashed the country, forcing thousands into temporary shelters. More than 50 people have died as a result of the floods across the country, which have affected the states of Selangor, Johor and Melaka, across the Strait of Malacca from Sumatra, particularly badly.

Hatta says the flooding occurs in the area every year and that the government needed to prevent it from happening again by clearing sediment from the surrounding rivers – making them deeper so that they no longer burst their banks following heavy rain.

Hamdani, the head of public relations of the North Aceh Regional Secretariat, told Al Jazeera that there were 32,854 people displaced across 16 districts in North Aceh after heavy rains carried surges of water downstream.

“Local residents have been sheltering with relatives, in mosques and prayer halls and in specially constructed emergency shelters,” he said.

On Sunday, North Aceh Regent Muhammad Thaib declared an official state of emergency in the regency as a result of the floods.

“We are working on logistics like making sure those displaced have enough food. For a few days it’s OK for people to eat instant noodles but after that we need to keep them healthy and feed them nutritious foods like tempeh, mung beans, grains and corn,” Hamdani said.

“We also need blankets for the children and babies as well as milk.”

Hamdani acknowledged that the floods were almost an annual event and said that the regional government was hoping the construction of the Keureuto Dam, slated for completion in 2023, would ease the problem. The dam will hold water from the Krueng Keureuto river and six of its tributaries.

In the meantime, the flooding comes at a particularly inopportune moment.

“COVID-19 numbers in North Aceh have been going down and I have had fewer patients coming to see me with serious symptoms in recent weeks,” Lhoksukon-based pulmonary specialist, Dr Indra Buana, told Al Jazeera.

Aceh has reported approximately 38,000 COVID-19 cases since the pandemic began and slightly more than 2,000 deaths, although it has barely registered any new cases or deaths in recent weeks.

But now, the doctor fears that the floods will cause a spate of medical conditions at the same time as the Omicron variant looms on the horizon.

“Floodwater is very dangerous,” he said. “If people inhale it they can drown or it can cause serious lung inflammation.”

“The wet and cold weather at this time of year also usually causes a rise in cases like asthma and upper respiratory tract infections.”

An added problem also comes from displaced residents fleeing their homes and sharing limited space in shelters or with family members where social distancing is difficult.

Aceh has one of the least vaccinated populations in Indonesia with just more than 1.2 million residents double vaccinated out of a population of more than 5.3 million, according to figures from the Ministry of Health.

“We are worried that there will be a spike in COVID-19 cases. It could be very dangerous if someone from outside the area who has COVID-19 visits the shelters and unwittingly infects everyone,” Dr Buana said.

“But at the same time we can’t prohibit people from bringing aid. “