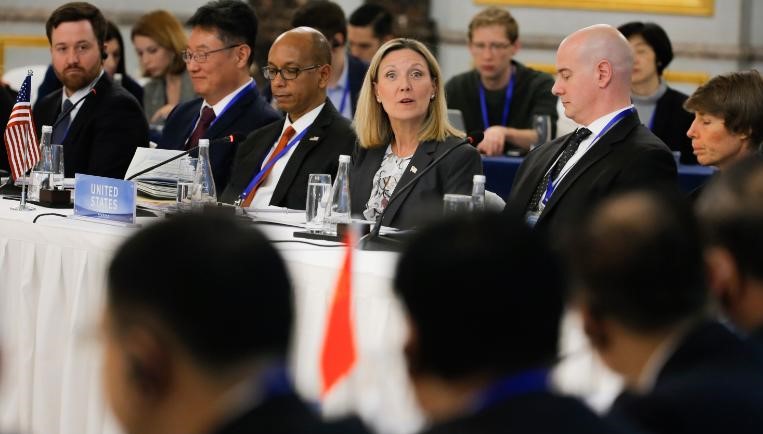 Five of the world’s largest nuclear powers pledged on Monday to work together toward “a world without nuclear weapons” in a rare statement of unity amid rising East-West tensions, CNN reported.

“A nuclear war cannot be won and must never be fought,” said the joint statement, which was issued simultaneously by the United States, Russia, China, the United Kingdom and France. “As nuclear use would have far-reaching consequences, we also affirm that nuclear weapons — for as long as they continue to exist — should serve defensive purposes, deter aggression, and prevent war.”
The statement also stressed the importance of preventing conflict between nuclear-weapon states from escalating, describing it as a “foremost responsibility.”
The statement comes as tensions between the world powers have risen to heights rarely seen in recent decades. In Europe, Russia is massing troops along its border with Ukraine, raising alarms in Washington, London and Paris. And in Asia, increased Chinese military activity around the self-governed island of Taiwan has spiked tensions between Beijing and Washington and its Pacific allies.
The statement released by the five powers, also known as the P5, as permanent members of the United Nations Security Council, called on all states to create a security environment “more conducive to progress on disarmament with the ultimate goal of a world without nuclear weapons with undiminished security for all.”
The five pledged to adhere to the 1970 Nuclear Nonproliferation Treaty (NPT) which obligates them “to pursue negotiations in good faith on effective measures relating to cessation of the nuclear arms race at an early date and to nuclear disarmament.”
Russian Foreign Ministry spokesperson Maria Zakharova said Monday the five-nation statement was initiated by Moscow with the intention of it being released in coordination with a review of the NPT that was to begin on Tuesday in New York but has been pushed by the coronavirus epidemic in the US.
“Given the importance and self-sufficiency of this joint statement, the nuclear powers decided not to delay its publication,” Zakharova said, according to the official TASS news agency.
Kremlin spokesman Dmitry Peskov told TASS the statement “was negotiated through diplomatic channels” and “comprehensively reflects the positions of the parties and the leaders.”
Some of the text of the statement, including the pledges to work toward a world free of nuclear weapons, echoes a statement issued by the five nations after a December conference in Paris that laid the groundwork for the since delayed review of the treaty.
And the statement that a nuclear war cannot be won was identical to language that the US and Russian Presidents, Joe Biden and Vladimir Putin, used after their June summit in Switzerland.
It was also the same language used by then-US President Ronald Reagan and Soviet leader Mikhail Gorbachev after their 1985 summit in Geneva.
Russia is believed to have the world’s biggest stockpile of nuclear warheads, with 6,255, followed closely by the United States at 5,550, according to the Arms Control Association (ACA). China (350), France (290) and the UK (225) round out the top five.
Pakistan (165), India (156), Israel (90) and North Korea (40-50) also have nuclear weapons, according to the ACA, but are not party to the Nonproliferation Treaty.
The director-general of the Chinese Foreign Ministry’s arms control department, Fu Cong, said that Beijing remained committed to a policy of no first use and deterrence, despite modernizing its nuclear capabilities.
“Nuclear weapons are the ultimate deterrence. They are not for war fighting. By saying that nuclear war cannot be won and must never be fought shows that this is an understanding shared by all the P5. So it is important that we have this in mind while we talk about the tension,” said Fu when asked about tensions over Taiwan.
“This applies everywhere and it applies with our bad relations with the US … This is something that we hope could reduce tension, and it would help clarify certain misunderstandings,” he added.
In November 2021, the US Pentagon warned that China was rapidly expanding its nuclear arsenal, and may have 1,000 nuclear warheads by the end of the decade. The estimate, based on the rapid modernization of China’s nuclear strike options and its construction of missile silos, marked a dramatic increase from the last projection in 2020 — which estimated China would double their stockpile of 200 warheads within a decade.
That same month, the Federation of American Scientists (FAS), a nonpartisan national security research and advocacy organization, found that China had made significant progress on suspected silo fields — which could eventually be capable of launching long-range nuclear missiles — in the western part of the country.
“For China, this is an unprecedented nuclear buildup,” wrote the authors of the FAS report.
For its part, the United States holds a policy of “calculated ambiguity” when it comes to nuclear weapons use, according to an October 2021 report from the Congressional Research Service.
“The United States has pledged to refrain from using nuclear weapons against most non-nuclear weapon states, but has neither ruled out their first use in all cases nor specified the circumstances under which it would use them,” the report says.
Beatrice Fihn, executive director of the International Campaign to Abolish Nuclear Weapons (ICAN), said the words of the five countries do not match their actions.
“They write this ‘nice’ statement but doing exactly the opposite in reality. They’re in a nuclear arms race, expanding nuclear arsenals, spending billions on modernizing and constantly prepared to start a nuclear war,” Fihn said in a statement posted on social media.